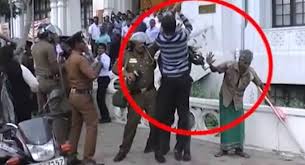 Image: A UNP member of the Dehiowita Pradeshiya Sabha Sujith Chandana  was caught on tape assaulting.

This incident took place after the Supreme Court’s’ ruling on December 13th that the dissolution of Parliament was unconstitutional. The tense situation in the country with regard to democracy and media freedom has been ended after the verdict on October 26, yet the expectations of the society haven’t been fulfilled. The Free Media Movement is of the view that similar developments in the country will further undermine the hopes of democratic co-operation in this backdrop. Similarly, the conduct of persons belonging to any political group is a threat to democracy and media freedom. The Free Media Movement call on those responsible to take legal action and make investigations against such threatening behavior against Lake House.
C. Dodawatta