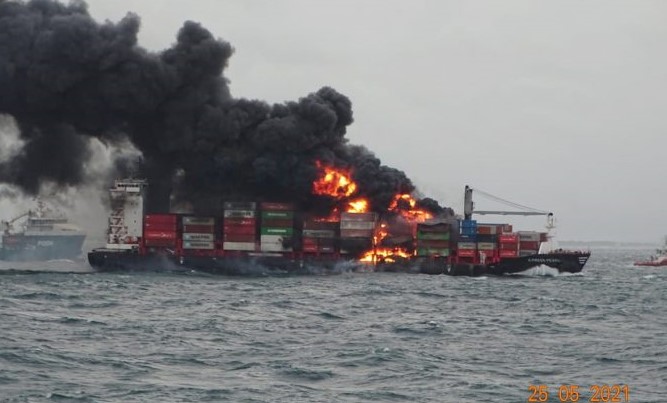 The government, relevant agencies and authorities must take immediate action to stop the devastation still being caused by the Express Pearl fire and to prevent further such damage.

The ship Express Pearl, Containers Carrier that belongs to a Singaporean company is currently on fire near the Port of Colombo. It was transporting containers of extremely harmful acids to the environment, human life as well as marine life and plants.
We affirm as the Negombo Citizens’ Collective due to the fire, chemicals and harmful acids are contaminating the sea and an environmental catastrophe is taking place.

The water on the beach has been depleted, and the sea breeze is blowing in an unprecedented quantity of debris into the beach, making it difficult to clean up.
Environmentalists and marine experts believe that the devastation will be disastrous, but it will also play havoc on ocean waters, fish stocks, aquatic plants, and coral reefs.

The Marine Environment Protection Authority [MEPA] has warned people not to touch any of these goods or materials that enter the sea from the ship as it may contain highly toxic chemicals. Even now, dead fish in the sea are floating on the surface of the water and has been washed ashore, where unfamiliar material can be seen.

The government has warned fishermen not to go fishing in sea and warned them not to eat fish harvested from the area. Due to this the fishing community which is suffering from the corona epidemic has fallen head over heels.

Unconfirmed media reports say that, the ship has requested Qatar and India for an emergency landing to upload some containers as the ship staff has observed that some chemicals are leaking from the containers prior to its arrival at the Port of Colombo, but Qatar and India has refused their request. Negombo Citizens’ Collective questions whether the Sri Lankan authorities knew about this?

Then Negombo Citizens’ Collective is of the view that if the preparations had been made with an understanding, the destruction that has taken place and is taking place could have been prevented.

A similar accident took place in Sri Lankan waters several months ago and it is questionable why Sri Lanka has not been able to put in place a mechanisms to deal with such accidents while a large number of ships are currently plying near Sri Lankan waters.

This catastrophe causes air pollution, ocean pollution as well as land pollution and can lead to catastrophic conditions with severe health problems. Although there are several international ocean-linked conventions and treaties that can be legally enforced regarding such accidents at sea, we have not been able to access at least some of the international legal action for compensation as the Government of Sri Lanka has not ratified many of these conventions.

The Negombo Citizens’ Collective intends to engage in specific legal and community participation initiatives with interested environmental organizations and individuals in this regard and urges the Government, relevant agencies, and authorities to take immediate action to implement the following proposals.

1. Providing necessary relief to the fishing community who are unable to engage in their daily livelihood due to this catastrophe.

2. If the facilities and resources available to Sri Lanka are not sufficient, obtain international assistance or take action to stop this ongoing devastation.

3. Take immediate action to stop the seepage of the destructive material spreading through the sea into the Negombo Lagoon and other freshwater reservoirs, rivers and canals connected to the sea.

4. To conduct a proper assessment of the environmental, economic, and social devastation and pollution caused on a scientific basis and to seek due compensation from any group or individual directly or indirectly responsible for this devastation.

5. The Government of Sri Lanka should study the maritime conventions associated with the ocean to which it has not yet been responsible, sign those conventions as soon as possible and formulate policies at the national level.

6. To develop and implement a proper precautionary mechanism to prevent such accidents and minimize the potential damage through a proper study of such accidents in the future.

7. Conduct an independent and comprehensive investigation into the granting of permission to enter Sri Lankan waters without paying due attention to the dangers of this container ship and bring all responsible parties and individuals to justice.