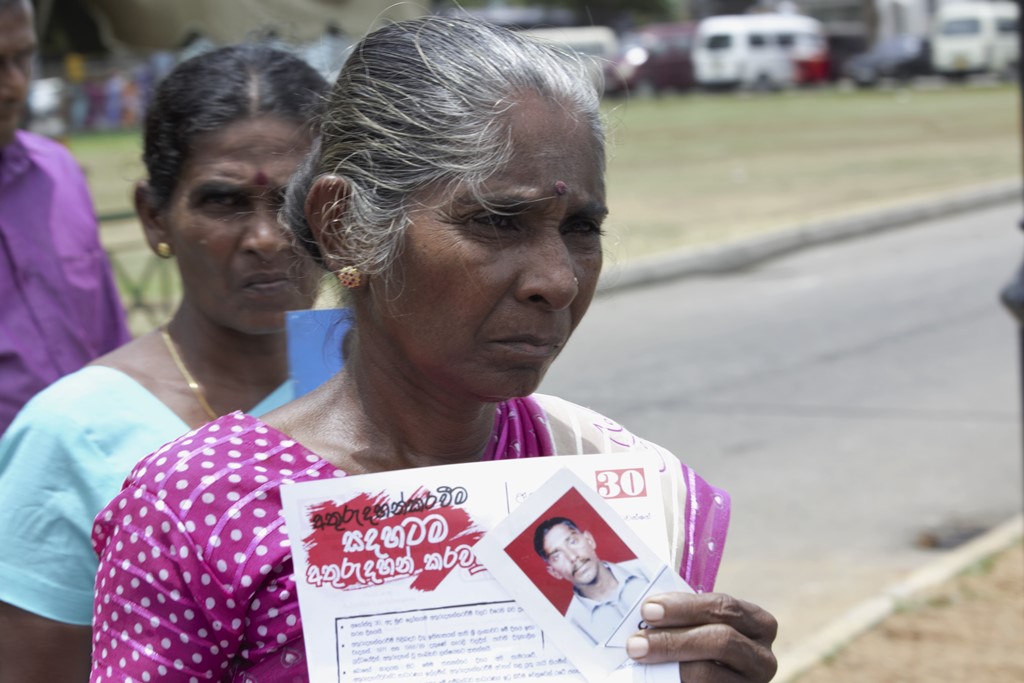 (A mother waiting for her disappeared son participating protest in Colombo, Aug 2016 ©s.deshapriya; in Vanni they are still facing military intimidation)

On 25th August, a mother who claims her son was abducted by military police seven years ago was visited by military officers.  The officers told her that her son would be released after she signed some papers.  They drove the mother for a long distance and kept her in custody while demanding the wife of the abducted person to meet with them. On 27th the old mother was dropped back near her home.  The officers warned her not to talk about what happened and assured her that her son would be released in a couple of days.  He has yet to be released.

On 19th September, a campaigner for the disappeared was stopped in Kilinochchi by two military men in an unmarked motorcycle while she was trying to visit a local family.  The men pushed her from her bicycle, groped her chest, and threatened her not to continue her human rights work.

On 25th September, a military rape survivor who has bravely spoken out was arrested for allegedly selling beer.  She was badly beaten while the police was trying to arrest her.  When her son (age 16) tried to stop the police from assaulting his mother, he was also arrested and beaten. Both of them are now charged for assaulting police officers and locked up for 14 days.

These are just three recent examples of the attempt to silence women who bravely stand to demand truth and justice in Sri Lanka.  They are the stakeholders transitional justice in Sri Lanka is supposed to reach out.  While the Consultation Task Force has increased women’s representation and allowed a range of perspectives to be heard, it has so far not been successful in getting the actual decision makers in the Government to adequately address the affected women’s security concerns.

For example, war-affected communities have long highlighted the lack of effective witness protection, a prerequisite for broad participation in transitional justice mechanisms.  A victim and witness protection act passed in February 2015, and a protection authority has been established, but the authority lacks independence and includes senior government officials who are widely believed to have obstructed prosecutions in human rights cases in the past.

In co-sponsoring the resolution at the U.N. Human Rights Council in October 2015, the Government of Sri Lanka committed to a “comprehensive approach to dealing with the past” through mechanisms and processes to ensure truth, justice, reparations, and guarantees of non-recurrence.  Moreover, the Government also committed to a victim-centered approach, promising “broad national consultations with the inclusion of victims and civil society, including non-governmental organizations, from all affected communities, which will inform the design and implementation of these processes.”

So far, the Government has failed to fully implement its own commitments. In mid August Parliament passed legislation establishing the Office of Missing Persons (OMP), but the bill was prepared in secret before the Consultations Task Force had even started consulting with victims and witnesses. The limited consultations that did occur before the bill was passed were problematic, allowing only a few victims to share their stories in an extremely short time period, not a chance to offer input on the OMP’s design in the transparent and inclusive manner required.

Similar patterns are emerging as the Government announced the establishment of additional transitional justice mechanisms. Mr. Mano Tittawella (Secretary General of the Secretariat for Coordinating Reconciliation Mechanisms) informed a select group of civil society members on 20th September 2016 that the Government now plans to have five mechanisms instead of four: in addition to the OMP, the Government is designing an Office for Reparations, Truth and Reconciliation Commission, a Forensics & Tracing Unit, and a Special Court—sequenced in that order.  Sources close to the government indicate that the Government apparently already has a draft bill on reparations.  The Forensics Tracing Unit was simply announced by Mr. Tittawella as a fifth mechanism (but sequenced before the special court), without any public discussion.

Even more damaging, there has been no consultation on the sequencing or ordering of the different transitional justice mechanisms with the survivors.  The decision to place the accountability mechanism last is clearly contrary to what has been demanded by victims; war-affected communities have been unequivocal that accountability is an immediate concern.  As one woman said in demanding justice, “How will those of us affected say ‘let them be happy’ after what they have done?”  Another said simply, “I have lost two sons in the war and handed over my younger son at the end of the war. All three have been snatched away from me. Please give me justice.”  Affected women have clearly articulated the need to see perpetrators stand trial for the atrocities they committed in order to begin to move forward.

War-affected women are not passive recipients of transitional justice.  They are active stakeholders and need to be treated that way.  In June 2016, women’s groups held discussions in the north and east to gather views of affected women on the proposed transitional justice mechanisms.  Participants gave nuanced proposals to advance gender justice through these mechanisms and address the root causes of past and continuing human rights violations.  They also noted ongoing security threats and expressed deep reservations about justice being sidelined as other mechanisms are developed and prioritized. These are stakeholders the Government should be consulting to deliver on its commitment to victim-centered transitional justice.

There is a real cost to ignoring these stakeholders.  Civil society members who served on the Consultations Task Force’s Zonal committees in the north and east encouraged the communities they live in to revisit their pain in order to make their voices heard.  In complying, victims clearly articulated the urgent need for justice.  Now those same civil society members must return to their communities and state that although input was received, it had no effect because the Government predetermined that justice would come last. By paying mere lip service to consultations, the Government has discredited local civil society members willing to engage in good faith and encouraged increasing numbers of disillusioned individuals to support resolutions on genocide and ethno-nationalist alternatives. Is this how the Government hopes to heal divides and deal with the past? Besides, there is a genuine concern that by putting the special court last, it may not happen, because it could come after the UN Human Rights Council has ceased monitoring Sri Lanka.

When asked why the government had unilaterally sequenced justice last, an individual involved in designing the transitional justice mechanisms offered the excuse that “war heroes cannot be transformed to war criminals overnight.”  Such glib responses not only ignore victim demands, they run counter to the Government’s recognition in co-sponsoring the Geneva resolution that a fair accountability process would actually shift blame from whole groups to individual perpetrators and thereby “safeguard the reputation of those, including within the security forces, who conducted themselves in an appropriate manner.”

The Government has so far sent mixed messages on accountability, raising distrust among war-affected communities.  The Government in 2015 committed to a special court with “Commonwealth and other foreign judges, defence lawyers and authorized prosecutors and investigators.”  Yet, President Sirisena told the BBC in January 2016 that he would never agree to international involvement, and the Prime Minister has made similar remarks.  The promotion of Major General Jagath Dias as the Army Chief of Staff and the nomination of former Army Commander Sarath Fonseka to be a Member of Parliament and his subsequent appointment as a Minister raise further questions as to whether the Government’s commitment to accountability is genuine.

The Government did not just promise accountability to the international community.  It made that promise to the Sri Lankan people, including the thousands of war survivors who risked their lives under the previous regime to push for justice.  In February 2015, Foreign Minister Samaraweera stated, “Unlike the previous government we are not in a state of denial, saying such violations have not happened.  We believe such violations have happened.”  He claimed that “ensuring accountability in the New Sri Lanka, will feature as a key component of the reconciliation process.”  A year later, Minister Samaraweera told a Jaffna audience that the Government was not appeasing international pressure but rather “embarking on this difficult journey because we owe it to the people of our nation.”  If the Government means what it says, it has fallen short.  If Sri Lanka is to move forward, there must be justice, sooner rather than later, and informed through meaningful public consultations, in which victims voices are heard and listened to.

Faced with mixed messages on accountability and inadequate consultations, civil society must stand united. In some ways, we were more united in our stance against the prior Government, viewing victims’ demands for truth and justice as interconnected with threats to democracy, press freedom, religious freedom, and the rule of law.  As a united front, we lobbied and pushed through three successive Human Rights Council resolutions in Geneva in 2012, 2013, and 2014 to counter the congratulatory 2009 resolution that praised the handling of the war.  Today, our civil society coalition is at risk of fracturing, leaving victims unsure which group to join or what to say.  We must remember that we are stronger together and that our legitimacy and power come from amplifying victims’ unfiltered voices.  Recognizing that victims – including victims of LTTE crimes and the families of those disappeared by government forces in the 1980s – have agency and differing demands, we should push for meaningful consultations and truly victim-centered transitional justice mechanisms.  We must join war-affected communities and prioritize their demands for justice as we navigate how we as a collective deal with our past.