”A year ago the TNA was promised that lists would be made public, but this did not happen as pledged, and it was only later that it was agreed that the lists should be available with the National Human Rights Commission. However I gather that no proper system has been put in place to make these publicly available,”

The National Action Plan for the Protection and Promotion of Human Rights 2011 – 2016 as well as the full series of  Sri Lanka Rights Watch are available at the Peace & Reconciliation Website.

The issue of disappearances, which looms so large in public discourse at present, is hardly mentioned in the National Human Rights Action Plan. This is understandable because the Plan is intended for the future, to ensure that Human Rights are not violated, and therefore it suggests mechanisms to prevent disappearances occurring in the future.
The question of disappearances that have occurred, or are alleged to have occurred, is however a significant one, and requires concerted action. The LLRC recommendations also point this out, as does the Draft National Reconciliation Policy, which refers to losses which must be recorded and compensated.
One problem is the confusion that besets us about the various types of disappearances. The first, which is used to build up horrendous sounding statistics, are those that occurred two decades back, largely in connection with the JVP insurrection. Though commissions were appointed in the nineties to go into these, and concurrent disappearances in the North and East, their findings were not collated systematically. We also failed to respond systematically to queries from Geneva, to which these disappearances had been reported.
The Foreign Ministry had, in Mr Kadirgamar’s time, set up a good system for dealing with these, with the assistance of the Attorney General’s Department, but his had fallen into abeyance at the time I took over as Secretary of the Ministry of Disaster Management and Human Rights. We got this going again, and were in constant contact with the Working Group on Disappearances in Geneva, which was quite positive about our responses. We did not get very far however in clearing the backlog, or at least bringing closure to cases which probably cannot now be clarified, before the Ministry was wound up.
The task reverted to the Foreign Ministry, which seems to have ignored it. My staff were not used properly, and they told me that letters went unanswered, a position reflected in the latest reports of the Working Group. I am told that in one instance the Ministry of Defence did send responses but these were deemed inadequate, and sent back, but not even a holding response was sent to the Working Group. It is not surprising therefore that the old figures have come back to haunt us, whereas positive interaction with the Working Group would enable them to understand that this is a problem which it is difficult to solve, but where there is no abiding sense of uncertainty.
Such uncertainty does exist with regard to many who went missing in the last few months of the conflict, and this must certainly be addressed. The best mechanism for this would be a Tracing Unit advised by the ICRC which is skilled in such work. Such a Unit for children now exists in Vavuniya, set up by its excellent Government Agent with UNICEF support.
That Unit has in fact got several queries about adults too, but it has been unable to deal with these. With more resources however, and specially trained Sri Lankan staff, a task I am sure ICRC would be happy to undertake, the service could be extended to adults too. That is certainly essential, and the sooner we develop an appropriate mechanism, with provision also for counseling for those who report missing loved ones, the sooner can we move towards closure of the anguish that is currently a barrier to proper reconciliation. We must remember that most of those who have suffered loss are simply bewildered, and need support. Their grief should not be treated as overt hostility, but rather as a simple emotion that must be assuaged.
This perception is clouded by the fact that there exists a third category of missing, namely those taken in for questioning by the forces in the period preceding the conclusion of the conflict, as well as afterwards. Unfortunately there was no clear system of records for this, and little effort to fulfil the obligations as to information that are now entrenched in the National Human Rights Action Plan. Though as I have noted the ICRC has been visiting such since 2007, and promoting family contacts and visits, lists were not publicly available, so that those whose loved ones were missing could check as to whether they were in custody. 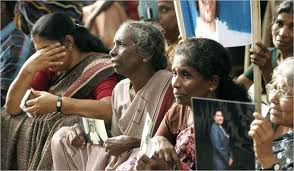 It is with regard to these last that confusion has arisen, leading to fresh anguish. A year ago the TNA was promised that lists would be made public, but this did not happen as pledged, and it was only later that it was agreed that the lists should be available with the National Human Rights Commission. However I gather that no proper system has been put in place to make these publicly available, which is why presumably it was claimed that they could be seen at police offices. At the Frontline Club however it was claimed by Yolanda Foster of Amnesty International that a mother who had gone to the TID Office in Vavuniya could get no information.
Yolanda refused to show me the letter, which struck me as strange if what she wanted was relief, since obviously I could not pursue a case I did not know. But I have no reason to doubt her honesty. What was not clear though was whether this was a mother looking for someone missing, or whether she knew her son had been detained and was trying to find out where he now was.
Some time back I suggested that those worried about the missing should be able to record names with a dedicated agency. At the same time the police could issue lists of all those in their custody. Where there were people alleged to be missing whose names did not appear in the lists, a Tracing Service could be put into operation. All indications now are that the numbers of such are few, but the confusion between the three categories leads to much criticism. Greater transparency and a solid information system would help us overcome this.