Constitutional and legal reforms to destroy the nation – Mahinda Rajapaksa 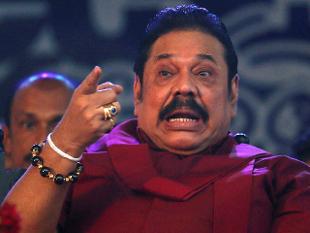 The government’s efforts to fundamentally change the constitution, the law and the structure of the SriLankan state is expected to come to the fore in the months ahead. Since November last year, several documents that have either been officially released or have come to light by other means, reveal very clearly the intentions of the government. The reports of six subcommittees appointed by the Steering committee of the Constitutional Assembly were published in November last year.

The report of the Prime Minister’s Consultative Task Force on Reconciliation and Transitional Justice was released in January this year. In the meantime, the 58 conditions imposed by the European Commission to restore GSP+ to Sri Lanka and the Prime Minister’s framework for the new counter terrorism law that is to replace the Prevention of Terrorism Act, also came to light through the media.

The fountainhead of the four documents mentioned above is the UN Human Rights Council resolution of October 2015 which was brought against Sri Lanka by the Obama administration and the European Union and co-sponsored by the yahapalana government. Even though a radical regime change has taken place in the USA since then, the yahapalana government has not taken any steps to hold talks with the new US administration and to get the resolution against Sri Lanka amended. It thus becomes plain that the yahapalayakayas co-sponsored this dangerous resolution in 2015 not only due to pressure from foreign parties but also because of their intrinsic anti-national leanings. It should be borne in mind that as of this moment it is not the American government that is carrying forward the resolution against Sri Lanka, but our own government.

The blueprint for change laid down for Sri Lanka by the yahapalana government as revealed by the documents mentioned above, can be summarised as follows:

It is not difficult to imagine how the provincial authorities in the North and East will react to such requests. The agenda that runs through the five documents mentioned above are, firstly, punishing the armed forces for winning the war, secondly, devolving more and more power to the provinces until the central government ceases to be relevant, thirdly, destroying the ability of the Sri Lankan state to respond
adequately to a break down in law and order, fourthly demoralising and breaking the will of the majority of the population and the armed forces, and fifthly, creating as favourable space for separatism as possible.

If these provisions are implemented, what we will be left with will be a fragmented Sri Lanka made up of nine federal states with a very weak central government which is legally prevented from responding effectively to situations of internal disorder. From that point, it will be just one step towards a separate state.

The Eelamist lobby both here and abroad working together with certain foreign powers, skewed the result of the 2015 January presidential election to bring into power a government through which they hope to achieve what could not be won through four decades of terrorism. I invite all SLFP members in the government, and parliamentarians of the UNP as well, to read the five documents mentioned here and to decide for themselves whether they want to betray the country and the nation by supporting this
traitorous agenda. The main constitutional pledges given to the people at the last Presidential election was the abolition of the executive presidential system and electoral reform.

The reason why the government is pursuing the above mentioned agenda with great enthusiasm while completely ignoring the constitutional pledges they gave to the people is obviously because they have other, more important masters to please than the people of this country.