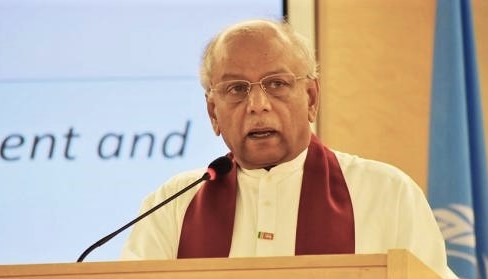 There is a dreadfully fractured logic in what the Government of Sri Lanka articulated before the United Nations Human Rights Council (UNHRC) as it withdrew from UNHRC Resolution 30/1 this week. This is playing to the nationalist gallery with an eye to the impending General Elections. It has disastrous consequences for the country, make no mistake.

Let me be clear. This is not about Sri Lanka agreeing to co-sponsor this Resolution of much fame in 2015. It is not even about whether, as some would cogently argue, that the Resolution, despite all its hoopla, only brought about cosmetic changes while leaving intact, the gigantic apparatus of security sector impunity. Though if we are to dwell a moment here, one does not have to go very far to validate that logic. For the past five years, parents of Sri Lanka’s ‘disappeared’ have been camped out on the roads of the North, asking for justice even as they die, one by one, as the relentless pressure takes its toll. Indeed, as the Resolution’s key sponsors within the ‘yahapalanaya’ Government bragged many a time, this was a ‘device’ to free the country from being called to order in the halls of the Council.

True, legislation was enacted to criminalise enforced disappearances. But what good is that when the two primary arms of the State tasked with law enforcement and prosecution remained so pitifully vulnerable to political pressure without clear institutional reforms being pushed through? We see that result now as the criminal law enforcement machinery breaks down leaving even Courts helpless when the police refuse to adhere to the direction of the Attorney General and evade serving summons on military personnel. We will return to that matter later.

But to illustrate the caution that glorifying this Resolution misses the point, yes, an Office of Missing Persons was established as a result. Yet as this column has frequently argued, much to the ire of proponents of that legislative measure, what good was that if the findings of the OMP are not directly linked to criminal prosecutions? Whether in the South or in the North, parents of the ‘disappeared’ want state acknowledgement for the deaths of their children and justice thereon, not money to be doled out or certificates of missing issued either by the OMP or by the Office of Reparations, another entity brought into being by this UNHRC Resolution.

In fact, the far humbler and much less talked about Commissions of Inquiry looking into the ‘disappeared’ and the extra-judicially executed during the Kumaratunga Presidency in the nineteen nineties did all that and more. But in what way did those Commissions and others like them, bring justice to the victims? Their recommendations were ignored and their reports, including the Report of the Lessons Learnt and Reconciliation Commission (LLRC), tossed into the pale of the forgotten. As the Sri Lankan Government proposes yet another Commission of Inquiry at the Council now, let us remember that stark fact.

It is in these aspects that this week’s Statement by the Government of Sri Lanka grievously lets down its own people, confounding all previous prevarications and obfuscations at several levels. First, we are told that Resolution 30/1 contributed to the 2019 Easter Sunday jihadist attacks on churches and hotels in that the national interest was undermined and national security compromised. Yet, all indications emerging from the probes on these attacks are to the contrary, are they not? This happened due to criminal failures in Sri Lanka’s political establishment, not deficiencies in intelligence. Warning of the rising tide of jihadist extremism was very clearly conveyed by ground-level intelligence to their superiors who however were more preoccupied with a bickering Prime Minister and President.

Thus indeed we have an asinine Secretary Defence who blurted out that, ‘we knew something would happen but not this big.’ But the point is that Resolution 30/1 cannot be blamed for the fact that Sri Lanka’s politicians chronically put their political interests first rather than the national interest. To foist the blame in this way is a trick worthy of a Houdini and dastardly so, at that.

Then again, we are told that a Commission of Inquiry (COI) headed by a Justice of the Supreme Court would be appointed ‘to review the reports of previous Sri Lankan COIs.’ Really? Are we down that long and weary road yet again? Who will believe in this rhetoric? Not Sri Lankans and certainly not others. In fact, this approach only pushes us down the road of internationalisation of state failures to ensure accountability.

For this proud articulation that domestic avenues of justice will be pursued ignores a fundamental problem, much like the very large elephant in the room and no, I am not talking of the United National Party’s decimation as a political force. Simply, the question is this. On what basis can we claim that our domestic systems of justice are functional when a basic act of the police serving summons on a ‘missing’ Admiral to compel his appearance before a court becomes a veritable circus? This week, the Permanent High Court Trial-at-Bar inquiring into the abduction of eleven children allegedly held for ransom and then ‘disappeared’ a decade ago, served summons for the fourth time on Admiral Wasantha Karannagoda.

It is not due to mere carelessness that law enforcement officers cannot locate the ‘missing’ Admiral who continues to be gaily seen at public events. Indeed, the framing of this as a clash between the Attorney General (whose officers appear in court to bewail the absence of the elusive Admiral) and the acting Inspector General of Police is not entirely proper. In fact, it is the writ of the Court itself which is, not to mince words, laughed at.

Called on to explain this bizarre happening, a Pohottuwa spokesperson said that this must be because the Admiral has been ‘framed’ and that a Commission inquiring into ‘yahapalanaya’ era political victimisation was examining the matter. If so and as has been said before, the best forum for the Admiral to explain himself is the Court, not a fact-finding Commission of Inquiry. With such palpable failures of justice in respect of the most heinous of atrocities, Sri Lanka does not have the proverbial leg to stand on when chanting its ‘domestic justice’ mantra.

Whether in 2015 or now, it is important to keep in mind that little attention was given to actually reversing our culture of impunity. To be quite clear again, this is also not about pointing the finger at powerful States who have got away with far worse than Sri Lanka in respect of atrocities that they have committed and continue to commit. This is simply about calling the State to account by its own citizens. Nothing more, nothing less.

Wagging the mocking finger at Sri Lanka’s victims, including innocent children robbed of their youth and bright promise by money hungry scoundrels, only makes the inevitable day of reckoning much worse.