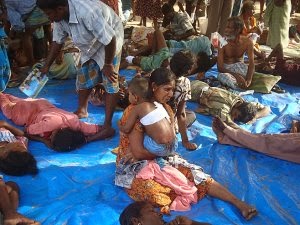 Congress Wakes Up, Tries to Contain Damage
Devirupa Mitra – NEW DELHI
Reduced to being a marginal player in Tamil Nadu mainly due to its policy with Sri Lanka, Congress gave its most detailed attention to the island nation in its manifesto with talk of putting international pressure on Colombo to hold a time-bound inquiry into war crimes in the last stages of civil war.
The manifesto, released on Wednesday, devoted 10 paragraphs to articulating its foreign policy vision. While it talked in generalities about the relationship with other countries, it was clear that Sri Lanka was an exception.
“We will work with other countries, to prevail upon Sri Lanka to ensure a credible, objective, time-bound inquiry into allegations of human rights violations and excesses committed by the Sri Lankan forces, during the concluding phases of the operations against the LTTE,” said the manifesto.
It was less than the call for an international probe demanded by regional parties in Tamil Nadu, but Congress tried to balance that by asserting that it will lobby for international pressure on Sri Lanka. Further, it said the Sri Lankan government should implement the “13th amendment and create autonomous provinces, especially the provinces of the North and the East”.
“On Sri Lanka, we will engage with that country to ensure that the Tamil-speaking people and other minorities have full equality and equal rights under the law. We will continue to extend all possible humanitarian and development assistance to enable the Tamil-speaking people and other minorities to rebuild their lives in a dignified manner,” asserted the Congress manifesto.
There was a striking overhang of India’s non-alignment policy – though tempered with  more contemporary overtones. “India has emerged as a critical bridge between the developed world and the developing world, along with Brazil, China and South Africa,” it said.
India has been working with these four countries as part of IBSA and BRICS forum – Russia, however, did not get a mention, even though it is part of the last platform.
Even more surprisingly, there was no single mention of India’s relationship with United States