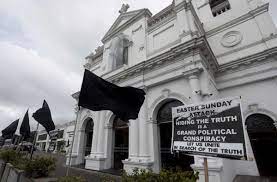 The Janatha Vimukthi Peramuna (JVP)-led National People’s Power (NPP) has claimed that certain groups representing the current Government are targeting Head of the Catholic Church in Sri Lanka and Archbishop of Colombo Malcolm Cardinal Ranjith, and spreading various misconceptions in an attempt to divert the ongoing investigation into the Easter Sunday terror attacks of 21 April 2019.

“The Government is now using various groups to once again spread racism and religious extremism in the country,” he further claimed.

Adding that the Archbishop had personally intervened to calm the victims of the Easter Sunday bombings, preventing further destruction following the terror attacks in 2019, and promised the people to get involved to bring justice to the victims, Herath said that Cardinal Ranjith has now been rendered helpless.

“People are now questioning the Archbishop who personally intervened then, regarding the delay in the investigations into the matter, and he is rendered helpless now. Therefore, he again intervened, and due to this, an attack is being carried out against him using intermediaries.”

Speaking further, Herath said that although the final report of the Presidential Commission of Inquiry (PCoI) into the Easter Sunday terror attacks and the recent parliamentary debates on the matter had revealed a number of sensitive issues, there did not appear to be a formal inquiry into such matters.

He also said that despite the fact that the terror attacks had not been prevented, the authorities had so far failed to take action against those responsible in the previous United National Front (UNF)-led Government, including former President and incumbent MP Maithripala Sirisena and former Prime Minister and current MP Ranil Wickremesinghe. He further added that the authorities had also failed to reveal the political motive behind the attacks.

He commented: “Instead of conducting investigations properly, certain groups representing the Government are launching a vicious attack, especially targeting the Archbishop, which is tragic.”

Herath also said that he was pleased with President Gotabaya Rajapaksa’s assurance at the United Nations General Assembly (UNGA) that “terrorist violence in Sri Lanka will not be allowed to recur”, but noted that the only way to prevent a recurrence of an attack like the Easter Sunday terror attacks is to conduct a thorough investigation and serve justice to the victims.

On 21 April 2019, Easter Sunday, three churches (St. Sebastian’s Church in Katuwapitiya, St. Anthony’s Church in Kochchikade, and Zion Church in Batticaloa) and three luxury hotels in Colombo (Cinnamon Grand Colombo, The Kingsbury Colombo, and Shangri-La Colombo) were targeted in a series of co-ordinated suicide bombings. Later that day, another two bomb explosions took place at a house in Dematagoda and the Tropical Inn Lodge in Dehiwala. A total of 269 people excluding the bombers were killed in the bombings, including about 45 foreign nationals, while at least 500 were injured. All eight of the suicide bombers in the attacks were Sri Lankan citizens associated with the National Thowheeth Jama’ath (NTJ) organisation founded by the suicide bomber at Shangri-La Colombo, Mohamed Cassim Mohamed Zaharan alias Zaharan Hashim.

Former President Sirisena appointed a PCoI to investigate the terror attacks, and the PCoI, in its final report, had recommended to the Attorney General (AG) that criminal proceedings be instituted against Sirisena under the provisions of the Penal Code for his failure to appoint an Acting Defence Minister when the former left for Singapore on a private tour on 16 April 2019.

In addition, the PCoI had also recommended that criminal charges be filed against former Defence Secretary Hemasiri Fernando, former National Intelligence Chief Sisira Mendis, former Inspector General of Police (IGP) Pujith Jayasundara, and former State Intelligence Service (SIS) Director Nilantha Jayawardena. The PCoI has further recommended in its report that the AG consider whether criminal proceedings can be instituted against Bodu Bala Sena (BBS) General Secretary Ven. Galagodaaththe Gnanasara Thera in terms of the International Covenant on Civil and Political Rights (ICCPR) Act No. 56 of 2007 for certain speeches he had made.