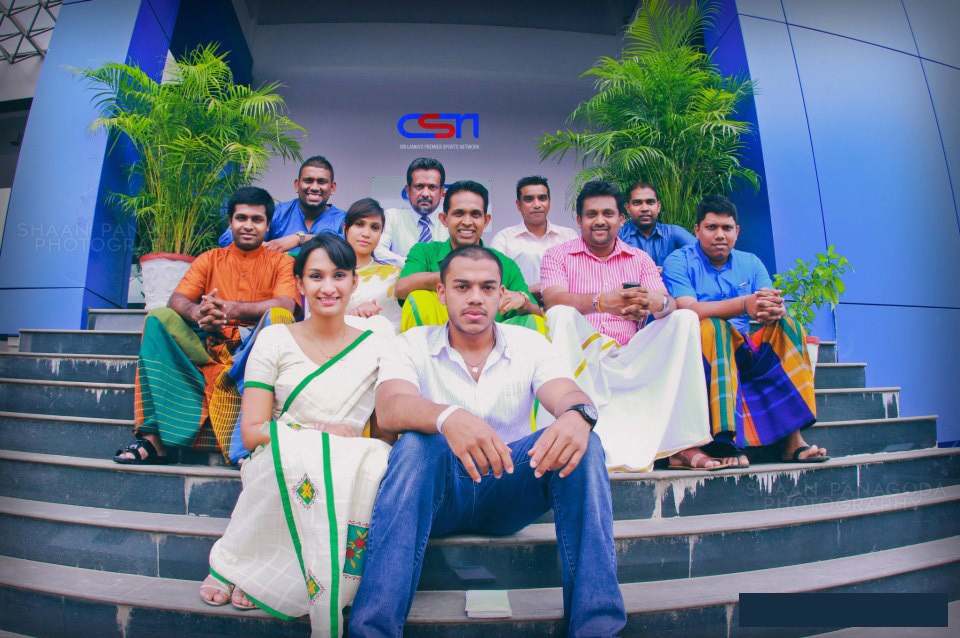 Image:CSN group photo taken at the opening day, Yoshith Rajapaksa is in front.

The decision taken by the Media Ministry last week to cancel the broadcasting licence of the Carlton Sports Network (CSN) is seen more as a political decision than anything related to the law.

Parliamentary Reforms and Mass Media Minister Gayantha Karunatilake was quoted in the Media Ministry website as saying the broadcasting licence of CSN was cancelled since the channel failed to adhere to transmission regulations.

The licence was cancelled as the network had reportedly violated three clauses.

Karunatilake said it was a decision related only to the administration of television network and was not related to any issue concerning journalists who were attached to it.

The minister said CSN had violated broadcasting regulations by changing its official address without prior notice to the Secretary of the Mass Media Ministry and that they also failed to submit their audited annual accounts to the Secretary.

Media Ministry Secretary Nimal Bopage told The Sunday Leader that the CSN licence was cancelled as the network violated three key clauses in the licence.

“Clauses 3.3, 11 and 14 were violated. The decision to cancel the licence was taken after an in-depth probe,” he said.

He also said the name of a broadcasting company cannot be changed without informing the Media Ministry, nor can the registered address.

However, the three radio stations were transferred to a new company, Sky Media Network, while CSN continued to operate the television station.

While most employees attached to the radio stations were absorbed by the new company, some 200 employees of CSN television remained with the TV station.

CSN Chairman Rohan Weliwita told The Sunday Leader that the jobs of his 200 employees were at risk.

Weliwita said one of the concerns raised by the Media Ministry was over the Battaramulla address of CSN.

He said the TV station receives media statements and other material from the Media Ministry to the Battaramulla address. As such to claim that the address is not registered to CSN is baseless.

One other concern raised was that the audited accounts of CSN were not given to the Media Ministry but Weliwita says there is no reason for the accounts to be shown to the Ministry.

While Bopage said that action had been initiated following an investigation, Weliwita said that if such an investigation was conducted then a statement should have been recorded from him as the Chairman of CSN.

“There was no statement taken from me on the CSN licence,” he said.Meanwhile, media rights groups also raised questions over the cancelling of the broadcasting licence of CSN.The secretary of the Free Media Movement (FMM) C. Dodawatte said that CSN faced several allegations after the current government took office.

However he says the decision to cancel the broadcasting licence is not healthy for the media industry.

Dodawatte also said that there needs to be transparency when an investigation is conducted on a media organization.

President of the Muslim Media Forum, N. M. Ameen said that there was no clarity on the investigation conducted on CSN.

He said that if there was an allegation then the investigation must be conducted in a transparent manner.

CSN initially operated as a sports, lifestyles and business television channel. It was launched in March 2011 and had links to the family of former President Mahinda Rajapaksa.