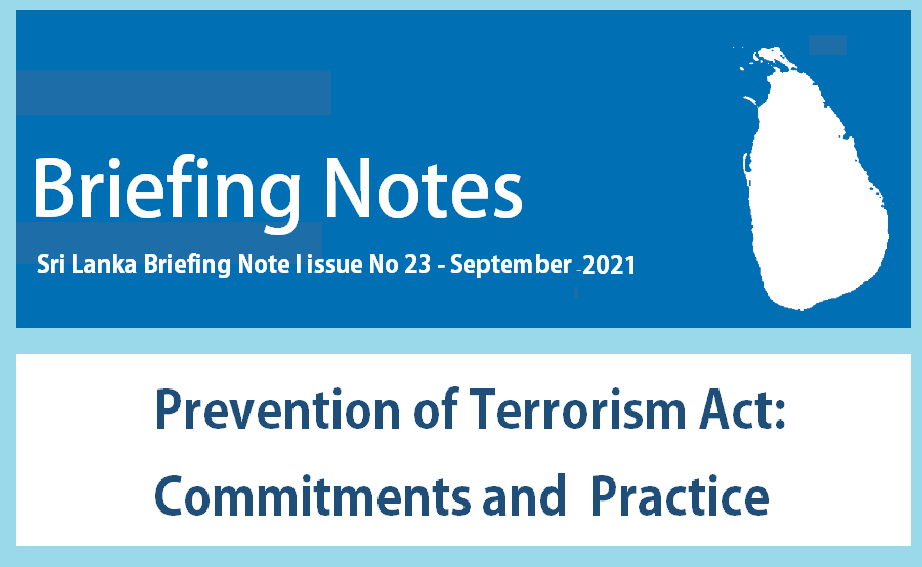 Part I: The Commitments

Prevention of Terrorism (Temporary Provisions) Act No. 48 of 1979 of Sri Lanka[1] (PTA) has been criticised for its abusive powers since its inspection. Local human rights groups, like MIRJE launched country wide awareness campaign on the anti-democratic nature of the act in late 70s.

Commitments Made by Sri Lanka Government Since 2015:

Since the end of the war in 2009 calls for the repeal of PTA has become stronger. The coalition government came to power in 2015 made several commitments to repeal and replace it with a new Counter Terrorism Act’.

Through Human Rights Council resolution 30/1, adopted in 2015, the Government of Sri Lanka committed to repeal the PTA and to replace it with anti-terrorism legislation. in accordance with contemporary international best practices.

In March 2016 then Foreign Minister late Mangala Samaraweera told Parliament that the government was in the process of repealing the Prevention of Terrorism Act (PTA). He expressed the hope that the matter would be finalised in a couple of months.[2]

In 2017 Sri Lanka Ministry of Foreign Affairs undertook to consult with the office of UN Special Rapporteur on the promotion and protection of human rights and fundamental freedoms while countering terrorism in finalizing the draft Counter Terrorism Act.[3]

After prolonging debates and consultations a draft Counter Terrorism Act to repeal of the Prevention of Terrorism (Temporary Provisions) Act, No. 48 of 1979 was gazette on 17 September 2018.[4]

But for known and unknown reasons the draft didn’t see the light of the day. Present government has not shown any interest in reviving that draft act.

In March 2020 the government of President Gotabaya Rajapaksa withdrew officially from Human Rights Council resolution 30/1. Making his statement of withdrawal   newly appointed Sri Lanka Foreign Minster Dinesh Gunawardena did not touch the issue of PTA. By withdrawing from the resolution 30/1 Sri Lanka government withdrew from the commitment to repeal and replace the PTA.

On 10th January 2021 European Parliament passed a resolution on the situation in Sri Lanka, in particular the arrests under the Prevention of Terrorism Act.[5]

The resolution Reiterated its strong opposition to the continued application of the current PTA; calls on the Sri Lankan authorities to fulfil their pledge to review and repeal the act and replace it with anti-terrorism legislation which adheres to international best practices.

Just 12 days after the EU resolution, on 22 January 2021 President Gotabaya Rajapaksa issued an extra ordinary gazette and appointed the 4-member Commission of Inquiry (Col) to investigate, inquire into and report or take necessary actions on findings of preceding Commissions or Committees appointed to investigate into human rights violations, serious violations of International Humanitarian Law (IHL) and other such offences.[6]

The said commission in its interim report disagreed with the view that the Prevention of Terrorism Act should be repealed. It only proposed the PTA should be amended after studying the laws introduced to prevent terrorism in other countries, including Great Britain. It further proposed to amend the Sections 9, 11 and 13 of the PTA and in enforcing detention orders by section 9, for persons detained for a minimum of three months or more, indictments should be filed, and trials should be completed.

It also suggested the importance of appointing an Advisory Council of at least three members representing all communities to advise the President in accordance with Article 13.[7]

On 25 August 2021 President Gotabaya Rajapaksa rejected the suggestion to appoint three members representing all communities and appointed all Sinhala Advisory Board to make recommendations and advise the President on the investigation, release, granting of bail and future action related to the persons imprisoned over terrorist activities and detained under detention orders.[8]  President appointed Chief Justice Asoka De Silva, who after his retirement, had made a declaration of support in favor of present President Gotabaya Rajapaksa in a court case in the United States of America[9] before he became the president, as the Chair of the advisory board.

Expansion of PTA by A Presidential Decree

On 12th March expanding the powers of the PTA President gazette the Prevention of Terrorism (De-radicalization from holding violent extremist religious ideology) Regulations No. 01 of 2021.[10]

The regulations are drafted in a manner that can further jeopardise the rights and liberties of persons, especially religious and ethnic minorities, and curtail political dissent with no effective due process guarantees. Additionally, the regulations are a clear violation of the separation of powers, with certain judicial powers being transferred to the executive arm of government.[11]

On 05th Aug the Supreme Court issued an Interim Order suspending the operation of Prevention of Terrorism (De-radicalization from holding violent extremist religious ideology) Regulations No. 01 of 2021, which was published by way of a gazette notification on 12 March 2021.

In its comments to “Follow up Report of the Special Rapporteur on the promotion of truth, justice, reparation and guarantees of non-recurrence on the visit to Sri Lanka” Sri Lanka Government has stated that “the Government is in the process of revisiting provisions of the Prevention of

Terrorism Act (PTA). On 21st June 2021, the Cabinet of Ministers met and decided to appoint a Cabinet Sub-committee and an Officials Committee to assist the Cabinet Sub-Committee, in order to review the Prevention of Terrorism Act, No 48. of 1979 and to submit a report to the Cabinet within three months. The   Committee has been appointed and has commenced its work.”[12]

End of 2021 Deadline by Chief Justice

Meanwhile the Chief Justice of Sri Lanka has sent a circular saying whatever the cases pending and filed prior to 2016 should be concluded before the end of this year. People who are awaiting trial under the PTA should be charged. If there are no charges, they should be released.[13]

Prevention of Terrorism Act (PTA) in practice: The present situation

Since mid-2020, few Journalists[14], a poet[15], a lawyer[16], few politicians[17], and civil society members[18] were arrested and detained for long periods under Prevention of Terrorism Act. Also some others were threatened of being arrested or accused of terrorism related charges.

The government expanded the powers of PTA to discharge the detainees through a rehabilitation programme without a trial.[19]

After the easter Sunday attacks on 21 April, 723 persons had been arrested under the PTA and 311 persons remain in custody presently. Out of this 311 only 46 persons have been charged sheet. [20]

On 02nd September 2021 More than 60 Easter Sunday Attack suspects were further remanded under PTA.[21] This group of persons have been lumped together in one case so that none of them can get bail as individuals. Most of these individuals have been arrested for doing their routine work like creating a website, delivering a parcel, or stitching a cloth.[22]

At the same time most of them are from poor families who cannot afford to sustain long-drawn out legal proceedings. They might be compelled to accept to choose rehabilitation under above mentioned “De-radicalization from the holding violent extremist religious ideology”. In such a eventuality the will be labeled as “radical Islamists”.

Earlier this year, Kulathunga Hettiarchchige Malcom Tiron (prisoner no. 5329) was released due to lack of evidence, after about 13 years in detention (arrested in 2008) and a trial of approximately 9 years (indicted in 2012).

On 19th July, 5 persons were released without charges being filed, after 93 days of detention.[24]

On 8th June 2021, Police have issued a statement saying that PTA will also be used with other laws to curb online fake news[25] which the BASL warned that the provisions of the laws mentioned in that circular could be misused by police officers in order to stifle the freedom of speech and expression.[26]

Below is a list of incidents that PTA had been used to arrest, question and intimidate journalists, politicians and civilians during February 2021- August 2021.

Arrests and Intimidation of Journalists

Journalists and media workers have arrested, detained and prosecuted under the PTA. Two media workers working in TubeTamil website and youtube channel were arrested in March. while another journalist Keerthi Ratnayake was arrested in August.

He was a former army intelligence officer and regular freelance contributor to the London-based, Sri Lanka-focused news website Lanka-e-News covering defence and Politics. He was arrested after summoning to inquire about information he had provided to the Indian embassy in Colombo concerning a possible terrorist attack on the embassy. He had predicted at least two extrajudicial killings occurred in 2020, and 2021 before they actually occur.[27]

Selvakumar Nilanthan, a freelance journalist and the secretary of the Batticaloa District Tamil Journalists Association was summoned by the Terrorist Investigation Division (TIDO of Batticaloa Police and interrogated for over 3 hours about his personal details including his income sources without providing him with any justification for such an inquiry. The Police have demanded the login details of his Facebook, WhatsApp, email, and bank accounts and asked him if he supported the LTTE. He was informed that he would be summoned again.

The journalist Murugupillai Kokulathasan who was arrested for sharing his thoughts about right to memorialization of Tamils who were killed during the war has been in detention for over 10 months (see section on notable incidents section for details).

The poet Ahnaf Jazzem has been in detention for around 16 months since his arrest in May 2020. Trivial accusations have been against him that his poetry has been harmful to children.

Arrests and Intimidation of Lawyers

Senior Lawyer Hejaaz Hizbullah was arrested on April 14, 2020 under the PTA. He was accused by the police of aiding and abetting Inshaf Ahamed (who was involved in the April 21, 2019 bombings), an accusation that has since been withdrawn. Since Hejaaz Hizbullah has been in detention the allegations against him have changed several times and his detention has been extended for over 17 months. The latest allegation on which an indictment was filed against Hejaaz Hizbullah in the High Court on February 18, 2021, is a speech-related offence of “causing communal disharmony,” one of a number of overly broad offences provided under the PTA.[28]

Arrests and Intimidation of Politicians

On 16th March, former Eastern province Governor Azath Salley was arrested in relation to a controversial statement he had allegedly made that “Muslim Law cannot be changed and that his community will only respect these laws and none other.” However, CID also stated that he was arrested in connection with Easter Sunday Bombings, while charges have been framed in relation to the controversial statement.[29] He continues to be detained for over 4 months.

On 24th April, MP Rishad Bathiutheen was arrested under alleged connections with Easter Sunday bombing.  On 8th April, the mayor of Jaffna was arrested under PTA for allegedly reviving terrorism for choosing a uniform that Police accused were similar to LTTE’s police uniforms. He was granted bail on the next day.

In April, Member of Parliament Harin Fernando filed a fundamental rights petition claiming that he has credible information that the authorities are planning to arrest and detain under PTA, due to his criticisms of government on Easter Sunday bombings. Court made an order preventing authorities from arresting him.

In a different incident, Police interrogated the chair of a divisional council in Kilinochchi over the naming of a street in Santhapuram as ‘Vettri Lane’, after a former LTTE cadre who had undergone the government’s rehabilitation programme. Police have asked the Divisional Council to replace the name to reflect the former cadre’s birth name instead of the nom-de-guerre. They have also threatened to take legal action under PTA for allegedly attempting to revive terrorism in case if they fail to do so.

Arrests and Intimidation of Memorialization

PTA has been also used to arrest those organize memorial events.  On 18th May, 10 persons who held a remembrance event at the Kalkudah beach in Batticaloa were arrested. A family members of Annai Poopathi, a Tamil activist who died in 1988 were threatened to be arrested under PTA, if they organize a memorial event.[30]

[19] Extraordinary Gazette No 2218/68. Prevention of Terrorism (De-radicalization from holding violent extremist religious ideology) Regulations No. 01 of 2021. Published 12th of March 2021.

[22] Briefing by a lawyer to a concerned group.