Sri Lanka: CPRP urges Rights Commissioner to include abuse of Prevention of Terrorism Act in her upcoming report. 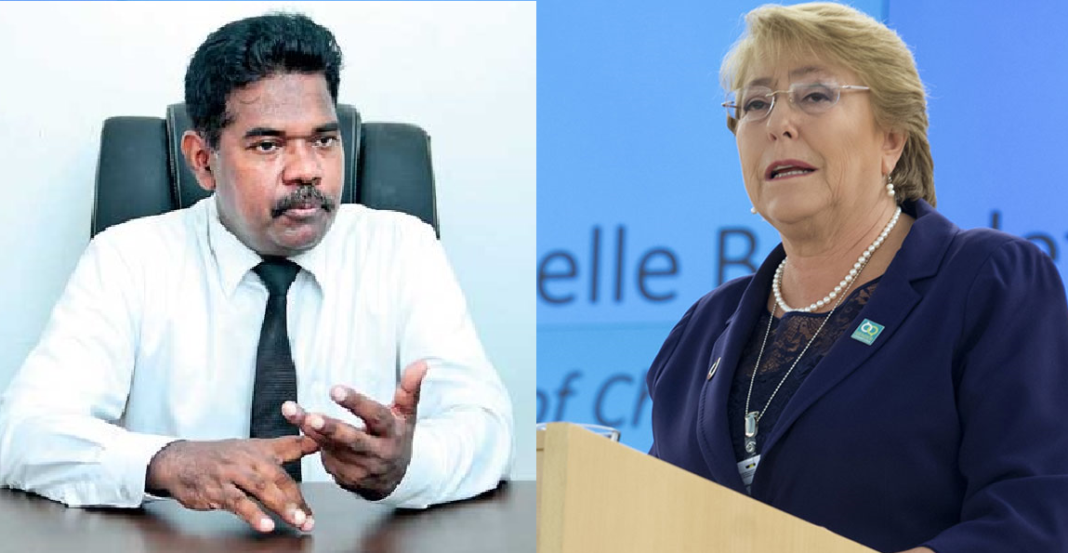 Image: The same letter has been sent  to EU Sri Lanka office, and the UN Working Group on Arbitrary Detention by Senaka Perera, Attorney-at-Law on behalf of the CPPR.

Committee for the Protecting Rights of Prisoners (CPRP) in  Sri Lanka  has written to the Human Rights High Commissioner urging her to include the adverse effects of the PTA in your oral update to the 48th session of the UN Human Rights Council.

The letter further says that ” 12 years after the end of the war, the present government actively uses the PTA. Amongst those detained more recently are prominent minority rights advocate and Muslim lawyer Hejazz Hizbullah, young Muslim poet Ahnaf Jazeem, Tamil journalist Kokulathasan, Sinhalese journalist Keerthi Ratnayake as well as two Muslim politicians, Member of Parliament and former Minister Rishad Bathiudeen and Azath Salley, a former Governor of the Western province, a former deputy Mayor of Colombo and leader of the National Unity Alliance.”

The text of the letter:

The Prevention of Terrorism (Temporary Provisions) Act, No. 48 of 1979 (PTA) was meant to be temporary. But 42 years later, it has become permanent in Sri Lanka’s legal framework, despite provisions that bypass judicial supervision and discretion, international human rights standards and principles of natural justice. Successive governments have used the PTA as a repressive tool against ethnic minorities and to suppress dissent.

The PTA had resulted in arbitrary arrest, prolonged administrative detention without judicial supervision, prolonged detention without charges, long drawn-out trials. Mental and physical well-being of detainees has been severely affected due to long term detention, and in the case of many, also as a result of rigorous interrogation, cruel, inhumane and degrading treatment and torture. There have been many cases of forced/coerced confessions where the detainee had not even known he was signing a confession as he/she could not understand the language it was written in.

Earlier this year, Kulathunga Hettiarchchige Malcom Tiron (prisoner no. 5329) was released due to lack of evidence, after about 13 years in detention (arrested in 2008) and a trial of approximately 9 years (indicted in 2012). There have been other reports of persons being released as not guilty after upto 15 years in detention.

We note that the provision in the PTA that allows for bail with consent of the Attorney General is rarely being used, and this could at least reduce the terrible consequences prolonged detention has on those who turn out to not guilty. We attach herewith a list of 11 PTA detainees whose details have been provided to us. All of them have been in detention for approximately 12-14 years, and trials are ongoing for approximately 7-9 years. 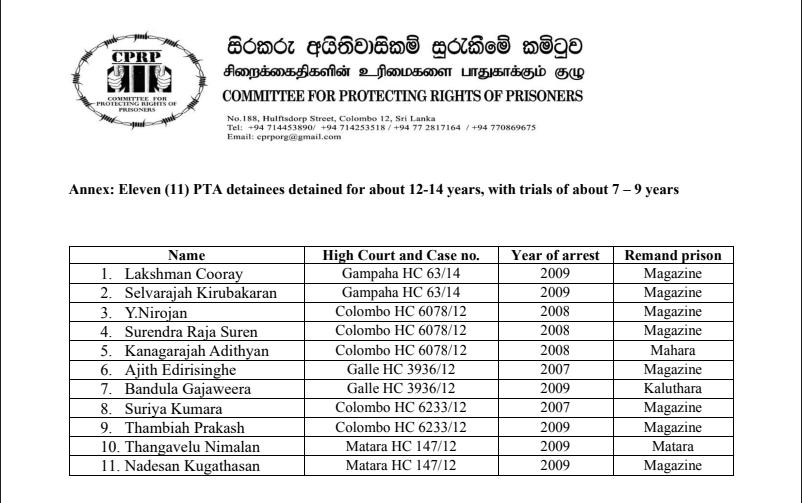 We welcome the recent presidential pardon for 16 Tamil PTA detainees, but we note that they are detainees who had been sentenced for a few years and were due to complete their sentences in a few weeks or months, while others who are serving longer sentences appear not to have been considered for pardons. We emphasize the need to find a just solution for many who have been convicted under the PTA, some of that is primarily based on confessions, which are often obtained under duress.

Successive governments have promised to reform the PTA, but have not done so. Perhaps considering the upcoming review of extension of GSP+ facility and the 48th session of the UN Human Rights Council, there have been some new promises, which also appear to be attempts to hoodwink survivors, victim’s families, human rights defenders and international community.

According to press release of the President’s Media Division , on 20th July 2021, a Presidential Commission appointed earlier this year and headed by High Court Judge M. H. M. D. Nawaz, had handed over an interim report to the president. It had highlighted the possibility to expedite the hearing of cases of those who are being detained for a minimum of three months or a longer period under the provision 9 of the PTA by filing indictments against them and to confine the detainees to their own home or the residential area under special security instead of detaining them in prisons in line with the provision 11 of the PTA. The interim report had also proposed the importance of establishing an Advisory Board consisting of not less than three persons representing all ethnic groups, to advise the
President or the Minister in charge of Defense under the provision 13 of the PTA. The Commission had been asked to hand over the final findings six months after the interim report.

As far as we know, the three recommendations of the interim report have been ignored. On 25th August 2021, the president appointed the advisory board without considering the ethnic composition , with all three members being from the majority Sinhalese ethnic community, although majority of PTA detainees are from ethnic minority communities of Muslim and Tamil. The Chair of the advisory board is retired Chief Justice Asoka De Silva, who after his retirement, had made a declaration of support in favor of present President Gotabaya Rajapaksa in a court case in the United States of America before he became the president.

To our knowledge, the retired Chief Justice had not followed the constitutional procedure in article 110 (3) that compels a retired judge of the Supreme Court to obtain presidential
approval, before appearing, pleading, acting or practicing before any court, tribunal or institution.

According to a media report , a “cabinet subcommittee was appointed to present recommendations in relation to the PTA on 23 June and they had been given three months to propose changes”.

We kindly request you to refer to adverse effects of the PTA in your oral update to the 48th session of the UN Human Rights Council. We also request you to continue to pay close attention to this matter, and support calls for the immediate repeal of the PTA and justice for those detained under the PTA and those who have been released after prolonged detention.