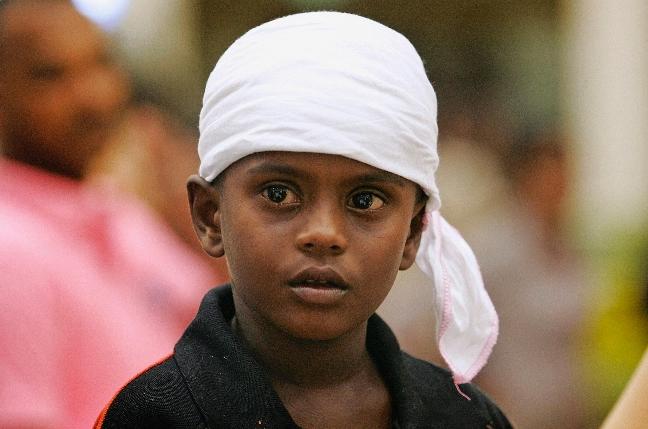 The Rajapakse regime has wronged Sri Lankan Tamils on many counts. India should boycott the island nation till it brings war criminals to book, says Meena Kandasamy
A visiting football team sends out the superficial message: all is well in Sri Lanka. It does not reveal that 4,000 university teachers have been striking for the past two months demanding better wages and greater spending on education, or that the government ordered the closure of all universities last week. It conceals a genocide that claimed 1 lakh Tamil lives in 2009 and a structural racism that marginalises minorities. In enthusiastically supporting the sporting spirit, even sections of the media fail to note that the football team had no permission to play in Tamil Nadu.

Instead of mutely following the dictates of the Central government, Tamil Nadu Chief Minister J Jayalalithaa has stood up for the people of her state. When she sent the football team packing, she showed how far the autonomy of a state could offer resistance to the Indian government, which has repeatedly disgraced Tamil aspirations and sentiments. While we were smarting from the wounds of a genocide that wiped out Tamils in the Vanni, New Delhi added insult to injury by inviting Sri Lankan President Mahinda Rajapakse as the chief guest for the 2010 Commonwealth Games. The Tamil Nadu Assembly’s unanimous resolution last year demanding investigation of war crimes and imposing economic sanctions against Sri Lanka has been met with absolute inaction. The immediate trigger for Jayalalithaa’s stand-off with New Delhi has been the manner in which the Centre has handled the issue of military training.

In spite of her strong objections against the training of nine Sri Lankan defence personnel at the Tambaram Air Force Station and her request to send them back immediately, the Centre relocated them to Yelahanka near Bengaluru to complete their course. The Centre went a step further, and two more defence personnel were admitted to undergo 11 months training at the Defence Services Staff College in Wellington, near Ooty, a fact that Jayalalithaa states “has been mischievously concealed from my government, showing scant regard for the views of my government as well as for the sentiments of the people of Tamil Nadu”. Any self-respecting leader would not have behaved differently.

Those who lament the return of the Sri Lankan football team and the stray attacks on pilgrims maintain a guarded silence about the hundred-odd unarmed Tamil Nadu fishermen who have been shot dead by the Sri Lankan Navy in the past decade. In fact, the first call for snapping cricket ties with the island came from the Tamil fishing community, which has faced increasing violence whenever Sri Lanka lost a match to India.

Perhaps, New Delhi has forgotten, as it often happens in the case of Kashmir, the Northeast, Chhattisgarh and Jharkhand, that the people of Tamil Nadu are Indian citizens. By failing to take into account the misery that has been systematically inflicted on the Tamil people by Sri Lanka for the past several decades, and by showing scant regard for the demands of the Tamil Nadu people and its democratically-elected government, India is sowing the seeds of its own disintegration.

If the people of Tamil Nadu begin to feel disenfranchised and disrespected by the Centre, it will not be because of an overnight reading of the Marxist-Leninist position that India is a prison-house of nationalities; it will not be because of any regional or linguistic chauvinism; it will not be because of any rebellious and irrevocable attraction to the Tamil Tigers. It will be the result of outrage that New Delhi treats Sri Lanka as a friendly neighbour while it treats the Tamil Nadu government like a suspicious enemy nation suppressing information and clandestinely imparting military training to trigger-happy Sri Lankan Navy officers within its own territory. The breaking away will arise from the heartbreaking awareness and realisation that they are being treated as second-class citizens in their own country.

In a classic twist, it is New Delhi’s mollycoddling of the 21st-century Hitler Rajapakse and his armed forces that is going to implant the idea of self-determination and the national question indelibly in the people of Tamil Nadu, much more decisively than the LTTE or its struggle for Tamil Eelam. If the Centre has any shred of belief in the parliamentary democracy that it espouses, it has to also believe the necessary corollary: the Jayalalithaa-led government and the Tamil Nadu MLAs represent the 60 million people of the state. Their unanimous demands reflect the demands of the people. India, already complicit in the mass killings of Tamils in the Vanni, should ideally restrain itself from doing further harm to the Eelam Tamils.

The Hindu, a staunch critic of anyone who criticises Sri Lanka, termed Jayalalithaa’s action “myopic” and went on to say in an editorial that she was asking for, and peremptorily imposing, a “virtual embargo on sporting and cultural ties” with Sri Lankans. On the contrary, such a boycott is one of the solutions to the continued oppression against Tamils by Sri Lanka. Statistics are being reeled out of the 2 lakh Indian tourists who visit Sri Lanka in a year, and Indian business elites and corporations are gloating over the fact that bilateral trade is expected to hit $10 billion by 2017. In this context, it must be remembered that even though India’s ruling establishment yearns for a privileged access to Sri Lanka’s markets in return for military training and other imperialist collaborations, any call for a cultural and academic boycott, coupled with economic sanctions, can prove to be a very costly affair for that island.

There is no denying the fact that massive international pressure alone can halt the ongoing cultural and structural genocide against the Tamils in Sri Lanka. Boycotts, divestment and sanctions successfully worked against the South African apartheid State. Those who seek to support the Palestinian State have enforced a cultural and intellectual boycott to expose Israel’s policies of exploitation. It is time to apply the same yardstick to the authoritarian Sri Lankan State, a country with a Constitution that explicitly treats Tamils as second-class citizens.

Politically, even as we stand in solidarity with the striking Sinhala students and teachers, activists and working class, the people of Tamil Nadu should make it clear that an all-out boycott is the only manner in which the rogue State, which butchered tens of thousands of its own Tamil citizens, can be challenged and its war criminals brought to book. Without encouraging a culture of intimidation and stone-throwing, and without degenerating into gimmicks that run the risk of being written away as electoral/political stunts, this position advocating a boycott of Sri Lanka should not merely be limited to military training or football matches. Not only should the people of Tamil Nadu press upon New Delhi to change India’s foreign policy with respect to Sri Lanka to sever all diplomatic relations with its island neighbour, but they should call upon foreign governments, international movements, cultural artists, intellectuals, universities, revolutionary organisations and ordinary citizens to boycott the genocidal Sri Lankan government and suspend interaction in every possible form until this failed State delivers justice to the Tamils.

The views expressed in the column are the writer’s own

Meena Kandasamy is the writer of a collection of poems Ms Militancy.