Borella turned into Pudumathalan and the re-appearance of Niemöller 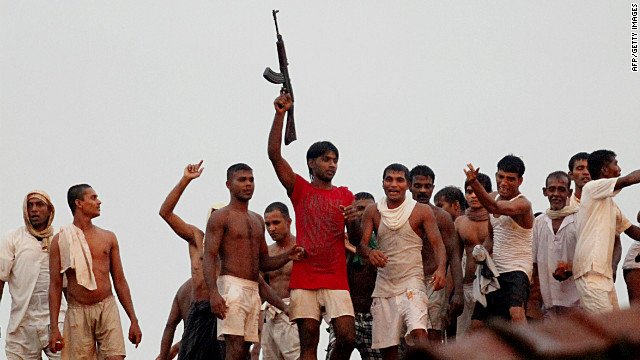 The photos of prisoners, like thugs, holding a few machine guns on the roof of Welikada Prison, challenging a government which is capable of terrorizing an entire country, what do they tell us? The news of the mass murder which was a response to that challenge, what does that tell us?
The photos and the news are two sides of the same coin. And the coin reflects the reality of Sri Lanka. It shows that intimidation, violence and murder have replaced humanity.

Sri Lanka’s prisons are lawless. And today, there is no rule of law in the whole country. The recent dreadful massacre by the Government’s security forces is a crime symbolic of the violence resulted from the fusion of the lawlessness of prisons and the lack of law and order in the country.

There are reports revealing that several of these prisoners were killed while they were still in handcuffs and that the search mission soon turned in to a killing mission, although the mainstream media, being controlled by political and financial pressures, may not report so. The shadow of the delayed strategy of killing and abduction in suppressing the underworld hang over the Welikada killings as well.

When we were jailed for the 1971 uprising, there was this saying that the Commissioner General of Prisons used to say whenever one of us were brutally beaten: “I only have to put up another notice saying that there’s another corpse. You dying, what does it matter to me?”

The prison officials who beat the prisoners or detainees showed no softness. The worst case was that the prison doctors who attend to the beaten prisons kept no record or placed no complaints about the injuries sustained. Sri Lankan prisons are in fact overcrowded and breed crime. High profile thugs become the unofficial administrators of prisons once they’re jailed.

The usual rule in prisons is to ignore all human rights although the outer prison is decorated with the slogan ‘ Prisoners too are human beings’ . This rule bends in cases of the politically powerful, the rich and the thugs.
There’s no doubt that the most of these of machine gunmen welding prisoners are the ones who organised kiribath dansal on the roads and rejoiced over the war victory wavering lion flags in May 2009. If not they were representatives of that stream. During the celebrations with kiribath and victory-drinks, there was no apparent compassion for thousands of innocent Tamil civilians who died in the battlefield a week ago.

That’s not all. In July 1983, it was similar groups of thugs, incited by the state that killed 52 unarmed Tamil inmates in the same Welikada Prison. There was no inquiry in to that mass murder and no one was punished.
A few months ago, the same Special Task Force which was called for this massacre, was called to suppress a protest carried out by the inmates of Vavuniya Prison. As a result of assaults during and after that incident, two Tamil prisoners died. And there was neither an inquiry, nor punishment.

In a society that does not voice the need to protect the other’s life, it is possible that the Welikada massacre is already forgotten.

‘They are dead, now what is there to do?’, they’ll ask. And what we should say is that ‘it is true that they’re dead, but the murderer is still sniffing for prey’. Who knows who the next prey is? Could it not be a University lecturer? A student involved in a demonstration? A picketing nurse? A protesting labourer? Murder is not only physical death. Killing with intimidation and threat, without actually killing, is also murder.

One of the significant demerits of the post war Sri Lanka is the culture of impunity, where crimes approved by state are not punished for. There is no need to say that there will be no independent inquiry in to Welikada killings and no perpetrator will be penalized; we all know it.

There’s no ground to justify killing 27 prisoners and detainees simply because they held weapons. Even if they were armed, they were inside the prison. Any operation intended to save lives should have first used other means of controlling inmates than just unleashing a rain of bullets like the legendary bull in the pottery shop.

However that is not the practice in present Sri Lanka where the military victory over the LTTE is praised heroic and exemplary in spite of the deaths tens of thousands of Tamil civilians. The practice is this: First the killing, then the justification. Both symbol and policy of the post-war Sri Lankan Government is to entirely eliminate whatever the opposition or dissent by whichever the party, by killing. The Sinhala society that has revered and heroized the war in Mullivaikkal where thousands of Tamil civilians died, cannot expect a different reaction from the state. The same war strategies that neglected the deaths of Tamil civilians were put in place in shooting at and beating hundreds of Free Trade Zone workers in Katunayaka and killing Roshan Chanaka. Same goes true for the shooting at the protest of the fishermen and killing Antony Fernando in Chilaw. The sickening verbal attack directed at the University lecturers who launched a strike based on reasonable demands, by labelling them traitors through State Media can also be an expression of the same war strategy.

The impeachment motion brought against the Chief Justice, they themselves appointed also shows the war strategy of intolerance of dissent or independence.

After the war, Sri Lanka continues to follow the ways of Chand-Asoka. There’s no need to exaggerate. Imperial Chanda followed no law. Because Chanda, himself was the law. Not only the King, royal family and royal relatives, but also those who lick the royal boots can violate anything. They can suppress anyone. Sri Lanka today is writing its future by going back to the past.

There may be no other country that can reiterate verse by Pastor Martin Niemöller while he was in a Nazi death camp: ‘Then they came for me–and there was no one left to speak for me’.

We need to stop thinking that prisons deaths do not matter to us, as they were criminals. Because criminals or not, they are still human: Because the voice that is not raised for the right to life of the other may remain the silent witness of our own death.
*Borella is where Welikada prison located and Pudumathanlan is where thousands of Tamils civilians died in the war.
GV