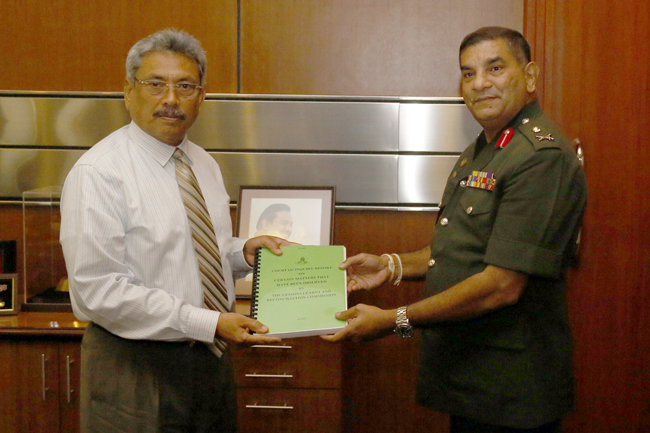 Click to magnify/shrink
The Lessons Learnt and Reconciliation Commission (LLRC) appointed by His Excellency the President had made some observations pertaining to the Army and allegations made by Channel 4.
Thereafter in terms of Regulation 4 of the Courts of Inquiry Regulations 1952, the Commander of the Army convened a Court of Inquiry (C of I) comprising of the under-mentioned officers to investigate and submit a report on the said observations made by the LLRC.
The Commander of the Army Lieutenant General Jagath Jayasuriya handed over the 1st part of the Court of Inquiry Report to the Secretary Defence Gotabaya Rajapaksa at the Ministry of Defence today.
The Court examined senior field commanders and infantry, armour, artillery, intelligence, civil affairs and medical officers who had participated in the Humanitarian Operation. From the evidence presented, the Court of Inquiry concluded that LTTE terrorists had violated the international law with impunity by committing various unlawful acts inter alia, using of civilians as human shields, placing of artillery and other heavy weapons amidst civilian concentrations and illegal conscription of civilians, including children and old people, for combat purposes thus exposing them to danger.
Evidence before the Court has conclusively established that the Humanitarian Operation was conducted strictly in accordance with the “Zero Civilian Casualty” directive made by His Excellency the President Mahinda Rajapaksa and commanders at all times obeyed the said directive and even where the LTTE terrorists had fired from No Fire Zones (NFZs), commanders refrained from firing at such NFZs. It has also been revealed that as an additional measure of safety, artillery commanders had added 500 meters more to the boundaries of NFZs given by higher headquarters.
During the Court of Inquiry it was transpired that LTTE terrorists had located artillery and other heavy weapons amidst civilian concentrations and from such locations they repeatedly fired at Sri Lankan Army positions. However despite heavy bombardments by LTTE terrorists, Sri Lankan Army troops had refrained from firing heavy weapons and this self-imposed moratorium had caused heavy casualties to Army troops.
Evidence revealed that at all stages of the Humanitarian Operation, the Sri Lanka Army behaved as a well-disciplined military force observing the International Humanitarian Law (IHL) and the law of war and they took all the precautions to avoid civilian casualties and all those who came under the control of the Sri Lanka Army, including surrendered/captured LTTE cadres, were treated humanely observing the IHL to the letter. On the contrary, shocking details of war crimes committed by LTTE terrorists such as using of civilian as Human Shields, summary executions of civilians who attempted to escape to army lines, forced conscription of children for combat purposes etc were revealed at the inquiry. The Court noted that the International community had failed in their duty to stop the war crimes committed by the LTTE terrorists.
From the testimony presented, the C of I concluded that the instances of shelling referred to in the LLRC Report were not caused by the Sri Lanka Army and civilian casualties might have occurred due to unlawful acts by LTTE. These acts include firing at civilians fleeing to the safety of Army held areas, dropping of artillery rounds fired by ill-trained LTTE gunners on to civilian concentrations, employment of sub-standard artillery rounds obtained from illegal sources by the LTTE, forced conscription of civilians including children and old people by LTTE for combat purposes, thus exposing them to danger.
In his concluding remarks the Commander of the Army has stated that in any war, even those fought by western powers using state of the art hi-tech equipment, civilian casualties are inevitable due to the vagaries of war and although the evidence presented before the Court of Inquiry does not attach blame to any Sri Lankan Army member, if new evidence is presented by any person giving precise information on civilian casualties, such instances will be investigated further by giving such persons the opportunity to present their evidence.
The C of I will now proceed to investigate the 2nd part of their mandate, to wit Channel 4 allegation on summary executions of captured LTTE terrorists.
Courtesy : Army Media Unit
Share
Facebook
Twitter
WhatsApp
Pinterest
Email