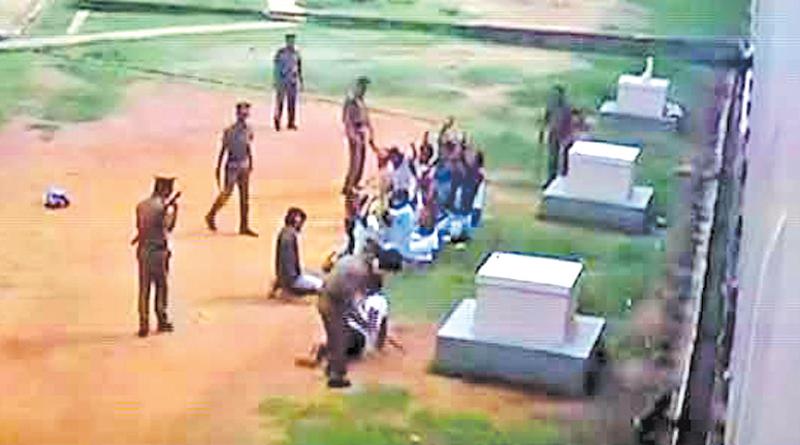 Image: Activists heve renewed their call for prison reforms and accountability inside Sri Lankan jailhouses, after horrifying footage surfaced last week of a vicious attack on inmates by prison guards.

The assault occurred in November last year, while the country was in deep political turmoil and the contested Government of ‘Prime Minster’ Mahinda Rajapaksa was in charge.

He was referring to explosive footage released by the Committee for the Protection of the Rights of Prisoners (CPRP) on Wednesday, January 16 depicting prison officials assaulting unarmed inmates at ACP, which is also dubbed a ‘Super Prison’ owing to ‘luxury’ facilities available at the prison complex. The footage obtained from CCTV cameras, clearly shows prison inmates, most clad in sarongs, running across a yard to avoid being assaulted by officials who are armed with batons. Many are at the receiving end of the officials’ wrath.

Towards the end of a about one-minute long footage, the inmates are seen lined up and forced to walk on their knees, as the officials continue to assault them with batons.

The CPRP said the footage was taken between 8.30 a.m. and noon on November 22, 2018. It also said the assault was an aftermath of a rooftop protest that was launched by the inmates on October 21 last year.

The protest was ignited by an incident where an over 50-year-old female relative of an inmate was subjected to an ‘inhumane’ strip search before she was allowed to inter the prison premises.

The search was said to be conducted by Police Special Task Force (STF) officials posted in all prisons as a measure taken by Minister of Justice and Prison Reforms Thalatha Atukorale to avoid mobile phones and illegal drugs being smuggled into the premises. The protesters also opposed the conduct of ACP’s Superintendent Siridath Dhammika, who according to the CPRP punished inmates without remorse.

“We will take strict disciplinary action against those who are involved in that. No officer has the right to release such videos,” she said. She also found fault with the CPRP for releasing the footage to the media before handing it over to the ministry.

CPRP’s Perera believes that the minister’s statement shows that she is more concerned about concealing prison brutality than resolving the matter. Perera said they took such measures as they believed that was the right thing to do.

“Our job, is not merely being a lawyer or committee member, but as responsible citizens, to reveal criminal activities taking place in the country. It is our right to do so. And, that is what we did,” Perera said.

The lawyer said that before releasing the footage to the media, on Tuesday, January 15, the committee lodged a complaint regarding the incident to the CID.

Meanwhile, following the revelation of the assault on inmates, Minister Atukorale appointed a three-member commission headed by Prisons Spokesperson Thushara Upuldeniya to investigate the matter.

The move was promptly condemned by the CPRP, which believed that a fair and just inquiry will not be conducted by a prison official. They handed over a written complaint regarding the same to the Justice Minister’s Secretary.

During the press conference Minister Athukorale had said, “As per the information revealed, iron bars, three-and-a-half feet long, were used to assault an inmate inside a ward. Then some other officers had gone to the ward and because ‘something’ had happened there, these inmates were taken out and this incident had taken place. That is our knowledge on this incident so far.”

“Her statement is only adding confusion to an already very clear case. Prison officials misusing their powers and causing bodily harm to inmates. Her job now is to take action against those involved,” Perera said.

“When an unclear phone call regarding an alleged plot to assassinate the President is obtained, it is sent abroad for proper analysis, but when a footage clearly showing a brutal assault in broad daylight is released, the CID lags behind. Arn’t the President and prison inmates human beings?” he queried.

Commissioner of Prisons (Operations) and Prison media spokesman, Thushara Upuldeniya told the Sunday Observer that the committee headed by him will hand over the report to the Minister tomorrow.

“We are still conducting investigations in Angunukolapelessa. I can’t reveal any information before handing over the report to the Minister,” he said.

He said that they can’t identify the exact number of injured inmates as this had taken place a few months ago.

When the Sunday Observer contacted Susil Premajayantha who served as Minister of Justice and Prison Reforms during the disputed 51-day Government, he claimed he had not been aware of the incident.

“By November 22 our Government was defunct anyway. Because of the interim order in the Quo Warranto case, no ministers could enter their offices to function,” Premajayantha said. However, the interim order restraining the functioning of the respondents as Prime Minister Mahinda Rajapaksa, Cabinet Ministers, Deputy Ministers and State Ministers was given by the Court of Appeal only on December 3, 2018. Minister Athukorala has appointed two committees to conduct investigations on the incident. The first committee was appointed on January 16 which consisted of two prison officers and one officer from the ministry.

The first committee is expected to hand over its report by tomorrow, January 21, while the second report is due by January 25. Members of both committees will stay at Angunukolapelessa to conduct investigations.

Since its setting up, five years ago, the CPRP was involved in the fight to encourage prison law reforms to treat prisoners more humanely.

“If the prisoners are treated badly inside the institutions that are supposed to reform them, how can they go into society and be accepted as ordinary people?” Perera queried.

Inmates have on several occasions attempted to draw the attention of the authorities to the harrowing conditions within prisons. One of the recent protests was when female inmates at the Welikada Prison launched two roof-top protests in August last year demanding better facilities and expedition of their cases.

Inmates are held under poor sanitary conditions, given food that is unconsumable, and constantly shouted at in harsh language.

Drawing attention to the recent incident, Perera said the CID has failed to launch a proper inquiry into the assault.

The CPRP on Friday, January 18 lodged a complaint with the Human Rights Commission of Sri Lanka (HRCSL) requesting an immediate inquiry into the assault.

Issuing a statement on the same day, the HRCSL stated it had “visited the prison, obtained statements from prisoners, and requested the Superintendent of the Prison to produce those who claim that they had been assaulted, to be examined by a Judicial Medical Officer.”

The Commission had also asked the Superintendent to take measures to provide medical assistance to inmates in need.

The statement indicated the Commission’s prior knowledge of the incident, as it stated that follow-up visits were conducted in December last year to obtain more evidence. Earlier, that same month, the Commission had summoned the Commissioner-General of Prisons and the Superintendent of the Angunakolapelessa Closed Prison for inquiries regarding the incident, and also “reiterated the need to adhere to the constitutional provisions on freedom from torture and pointed to the Convention Against Torture Act No 22 of 1994, which criminalises torture.” It stated that inquiries are continuing and the Commission hopes to issue its recommendations soon.

The CPRP says that all officials involved in the assault should be held accountable. Tomorrow, January 21, the committee is due to lodge a complaint with the National Authority for the Protection of Victims of Crimes and Witnesses as they fear that the inmates will be intimidated during the inquiry.

“If the authorities fail to resolve the matter, we will have to find solace in courts,” lawyer Perera of the CPRP said.