An open letter on behalf of the people of Keappapulavu, Mullaitivu 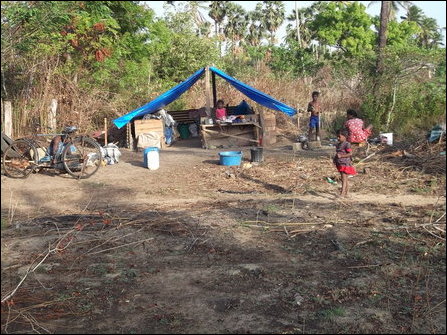 The Tamil National People’s Front (TNPF) organized a protest in front of the Mullaitivu Government Agent’s office on Friday the 21st of September 2012 urging resettlement of the Keappapulavu people in their native village. The protest was well attended by people of Keappapulavu living with host families in Vattrapallai and by other political parties-  representatives of the TNA, Democratic People’s Front, Navasamasamaja Party and the New Democratic Marxist Leninist Party. Despite intimidation from SLA intelligence the protest well attended. As you may be aware my vehicle and Mr. Kajendran’s (General Secretary of the TNPF) vehicle were attacked on our way back to Jaffna after attending the protest.

I have attached herewith a memo signed by a number of people from Keappapulavu who attended the protest, seeking the international community’s intervention enabling them to resettle in their native village. The memo would have had more signatories if the SLA had not prevented people from inside the Menik Farm camp who had wished to attend the protest on Friday. The people had been denied passes by the SLA to attend the protest.

Yesterday morning, a day after the protest, (22/09/12) the Mullaitivu GA along with the regional military commander of the Keappapulavu area (one Samarasinghe) had met with representatives of the village in the Chetikkulam Camp. The intention of the meeting was to get the consent of the families to willingly move temporarily on Monday the 24th of September, to the Vattrappolai Maha Vidyalayam till such time as the villagers find alternate lands that they would like to settle in (they are not going to allowed to return to their original lands in Keappapulavu as the military has begun to build their permanent base in the area that covers the entire village). The officials had promised to provide all the needed financial and other assistance to facilitate their relocation.

At this stage the military official, Samarasinghe, had lost his temper and had become extremely abusive. He had said, come what may, all the people will be removed from the Chettikkulam Camp on Monday the 24th September. On that note the meeting ended. The Keappapulavu people are insisting on wanting to resettle in their original lands in Keappapulavu itself and nowhere else. They fear that if they leave Chettikkulam Camp, the world’s focus on resettlement will be lost and they will never be able to get back to their own homes.

I write seeking your intervention to prevent the people of Keappapulavu being resettled against their wishes. It seems like the GOSL wants to close down the Chettykulum camp before the UNHRC sessions in Geneva in November. I am sure you would agree with me that the people can’t be used as pawns by the Government to attain its short term diplomatic goals.

Photo:An example of so-called resettlement in alternative land for the people who once had a contended life with houses and cultivation lands in their own villages. Photographed at Aananthapuram, a neighbouring place to Keappaapulavu in the Puthukkuidiyiruppu division of Mullaiththeevu district.( Tamil Net)