A sand loot worth of Rs 4,000 million by Douglas Devananda’s NGO 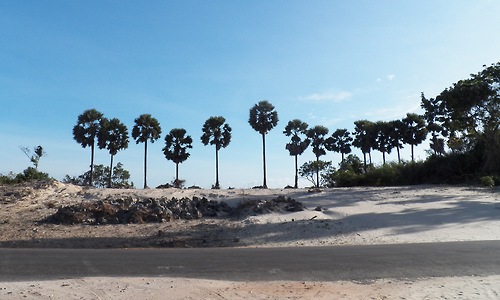 Geophagia – Maheshwari Trust  by V. Sagadevan
A sand loot worth of Rs 4,000 million in Vadamarachchi East is now on process in past four years,to rob the money of thousands of millions of people .Who can question against this?

More than 4000 million rupees of public money has been plundering over the past 04 years ,through the sand business in eastern region of Vadamarachchi by Douglas Devananda’s Maheshwari Trust Fund. If this money had been spent in a proper way by Vadamarachchi East Divisional Council, for its development, to improve the standard of the life of people, Regional Council of Marutankeni would have been upgraded as the Municipal Council of Marutankeni. The quality of life of that Regional Council also would have been increased. But what happened? T hat money alone was spent only to set up a luxurious life of a group of people. In the name of The Maheshwari Trust, funding by non-governmental organization (NGO) is defalcating the public property in a mass level .Who ever the villagers question against this corruption are put under the direct threat of Minister Douglas Devananda.

During the time of Vadamarachchi East divisional meetings, Minister was beating, scolding, slapping members of his party .There were many opportunities that he was getting involved in such violated activities in the presence of the state government officers , people of that region and the community members. The population is considering that this is the way that he is indirectly threatening the people.

Vadamarachchi in the Eastern Province which is consists of its sand resources and natural-resources, has been distressed by the Minister Douglas Devananda’s NGO. There is no program set up for rearrange the deteriorating natural resources or enhance the quality of life of rural people through this derived income from sand operation.

Due to this sand problem which occurred in Vadamarachchi east , a young man , Tevarasa Ketisvaran of Kutattanaiyai, who loves the environment , was shot by gunmen and murdered in gruesome manner on 31st December 2010 at 9.00pm,

Because of this incident, the 1st day of new year 2011 became a fateful day for Vadamarachchi east. These sorts of events bring up a major threat to the democratic process on the civilians in the region.

The rapidly carried out development projects in the Jaffna district like housing, and public and private infrastructure in the coming years are expected to require tens of millions of sand Cubes. There is no reason that people believe in Maheshwari Fund, on their willingness to work with the Justice in future. Jaffna District People fear that the minister will exploit fraudulently the money which will come for the Development of Jaffna, to fulfill the political objectives of his own benefit with help of his colleagues through his sand business.

1. 20,000 Cubes of sand, per month (7,000 Tipper – loads) has been granted permission by the Bureau of geological scale mines. But the amount of sand removed was many times higher than that particular number. No cold feet to prevent illegal activities because of their political background.

2. The copy of the bond of Mining of sand should be displayed in the area of mining. That condition was breached. Not even of the copies of the environmental report and the local regional council’s permit License were displayed at the place of mining sand.

3. The trippers lift more than 3 cubes of sand are not allowed to do transport ,anywhere in the Northern Province .But The 7 Cube trippers of Maheshwari Fund, carry out the loads of sand again and again all the way.

4. Regulation of one way license is to load the sand only at one time. But the Maheshwari financed trippers loaded 02 – 03 times by violating the rules.

5. In addition, the NGO that aims to make money in this way can not be used for political purposes. But claiming that they are using this fund in order to serve the general requirement of public , Minister Douglas Devananda and his group are using them for their Fraudulent political programs . Maheshwari Fund has not given any obvious answer for the People’s allegations against this process of misusing of funds.

Since there is no answer for the above questions, from either Minister Douglas or his Maheshwari fund, our society will jump in to the struggle without doing any preannouncement. There will be a plan implemented by us to stop this illegal sand mining in the area of Marutankeni by the Maheshwari Fund and in order to make the owners of sand mining places , people in the area and the people of Jaffna District benefited.

Ended 04 years of war, still the resettlement has not yet been completed. There is an underway process going on behind the screen in Valikamam North to usurp the plots of land of people. Tens of thousands of Tamil youth are leaving the country as they have no Job and insecurity etc. The level of cultural corruption and the robbery incidents have increased like never before in the Jaffna district. The children who lost their parents do not even have any security in care homes.

At this situation, people question is anyone ready to guarantee that heavily earned money through illegal sand by Maheshwari Trust Fund, will be used for the public well-being