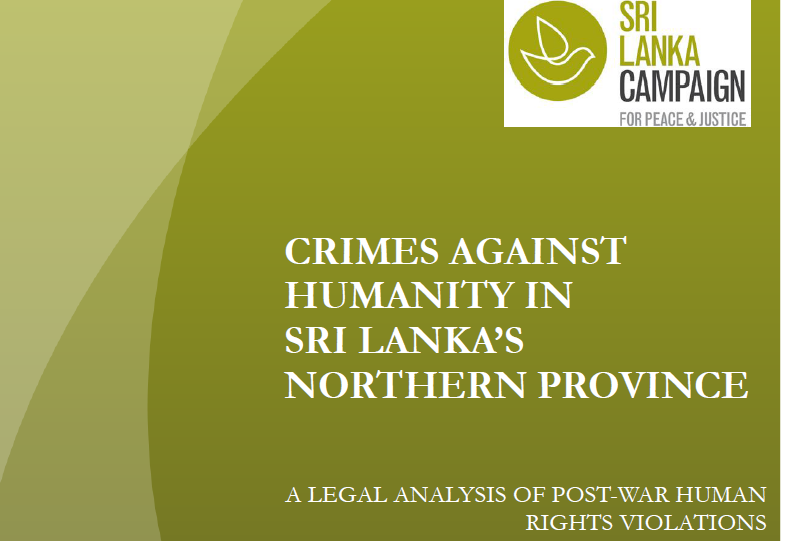 The Sri Lanka Campaign for Peace and Justice has today released a report that presents credible allegations pointing to the commission of crimes against humanity by Sri Lankan security forces during the five years since the civil war ended. These crimes include rape, sexual violence, torture, murder, imprisonment, enforced disappearance, other inhumane acts, and land grabs against Tamil civilians in the Northern Province. Various sources, including a Panel of Experts commissioned by UN Secretary General Ban Ki Moon, have found credible allegations of crimes against humanity committed by both government forces and the LTTE during the civil war.
This report is the first to allege that the Government’s subsequent actions after the war and through to the present day also point to the commission of such crimes. These findings underscore the urgent need to demand accountability now, for both post-war and wartime violations.
This report makes the legal case for an investigation into post-war violations using the framework of international criminal law. It relies on public source reports of post-war violations that have been assessed as credible, corroborating these reports with 26 in-country interviews with survivors, attorneys, journalists, and human rights campaigners.
It is endorsed by UN Panel of Experts author Yasmin Sooka, UN Special Rapporteur on Torture Juan Mendez, former UN Special Rapporteur on Torture Manfred Nowak, and international criminal law and human rights law scholar Professor William Schabas. It has also been endorsed by independent human rights practitioners, including Wolfgang Kaleck of the European Centre for Constitutional and Human Rights and Toby Cadman of the TMC advisory Group. The Centre for Justice and Accountability conducted a thorough review of the legal analysis and research methodology and endorses the report.
Fred Carver, Campaign Director for the Sri Lanka Campaign for Peace and Justice, said,
“We are releasing the report now in the hope of influencing the Human Rights Council to mandate the international Commission of Inquiry that Sri Lanka so desperately needs. But the report also has the longer term objective of changing the way we talk about the situation in Sri Lanka. Crimes Against Humanity did not just take place during the final stages of the war in 2009, they appear to have taken place since, and right up to the present.
Juan Méndez, U.N. Special Rapporteur on Torture, said,
“These documented allegations of torture, rape, sexual violence, enforced disappearance, murder, and other inhumane acts against Tamil civilians are troubling in any context and they elicit an affirmative obligation on the State to investigate, prosecute and punish those responsible. This report raises the disturbing possibility that they have been committed as part of a widespread or systematic attack on the civilian population, which would make them international crimes that should trigger the jurisdiction of international courts if the Sri Lankan judiciary proves unable or unwilling to prosecute them.”
The report documents 20 incidents involving rape, and two further incidents involving sexual assault, 12 incidents involving torture,  eight other incidents involving severe violence, nine incidents of arbitrary arrest, four incidents involving murder, and two incidents involving disappearance. In all cases the perpetrators were members of the Sri Lankan Armed Forces or the Police, and the victims were Tamils from the Northern Province. These incidents have all previously been reported upon, but this report demonstrates that they can be linked together as part of a systemic attack on the civilian population of the Northern Province by members of the Sri Lankan Security apparatus.
Examples include:
In 2013, a Tamil woman from the Northern Province was picked up at home by five or six men and taken into a white van. She was blindfolded and taken to an unknown destination. She was tortured. The first night, she was raped by men in military uniforms who took turns raping her. They continued raping her the following morning. She was tortured including by cigarettes burns all over her body and her genitals.
On 6 February 2013, in Jaffna, a distributor of another Tamil daily, Thinakkural, was assaulted with metal rods at Point Pedro. The attackers burned his motor bicycle and the newspapers. As a result of his serious injuries, he was rushed to the Jaffna Base hospital
In January 2013, in Kilinochchi, TID officers searched the office of a TNA MP twice, and claim to have found explosives, pornographic material and condoms in his office. The TID officers arrived at the MP’s office alongside journalists, who took pictures of the TNA MP’s private secretary and assistant posing with the pornographic material and explosive purportedly found at the office. These images appeared in leaflets that were distributed in and around Kilinochchi town shortly thereafter. The TID officers detained The MP private secretary and assistant. The two were later transferred to Boosa detention camp, in terms of an administrative detention order issued under the Prevention of Terrorism Act. They challenged their detention in a fundamental rights application to the Supreme Court. They were later released in November 2013. No charge was filed against them at any point, nor was the TNA MP even questioned regarding the alleged discovery of explosives at his office
On 26 November 2010, the Deputy Director of Education of Jaffna District, Markandu Sivalingam, was shot dead by armed men in Urumpiai, Jaffna. He had reportedly refused to instruct schools in his educational zone to sing the national anthem in the Sinhala language.

The report can be downloaded here