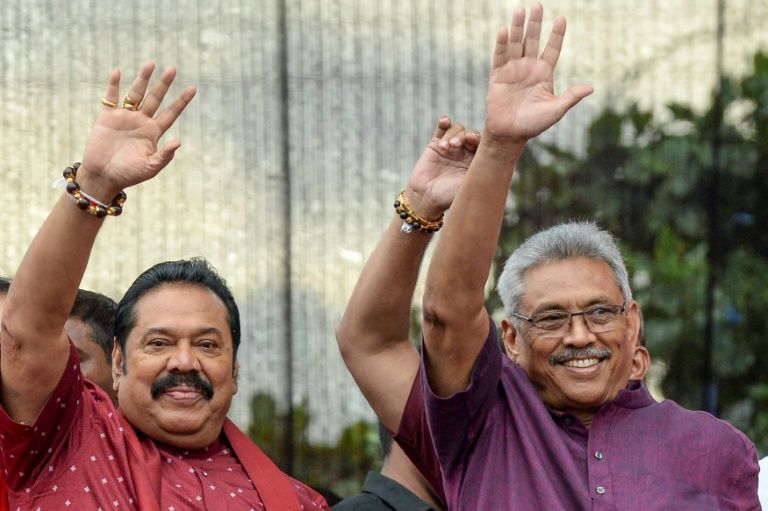 (AFP) Sri Lanka is set to have its first ever government run by siblings when President Gotabaya Rajapaksa appoints older brother Mahinda as prime minister on Thursday, giving the powerful clan its second taste of power.

Mahinda was president for a decade until 2015, during which time the family controlled more than two thirds of the national budget. Gotabaya effectively ran the security forces.

Many family members were appointed to key state institutions such as the national airline and state corporations. Close relatives were also appointed to top diplomatic posts in foreign capitals.

Here are the key members of the dynasty:

Mahinda Rajapaksa, 74, is the patriarch of the family. First as prime minister in 2004 and then president from 2005 until January 2015. Known as a charismatic leader, he is adored by the Sinhala-Buddhist majority for crushing separatist Tamil rebels in May 2009 following a highly controversial military offensive.

During his rule Sri Lanka also moved closer to China, borrowing almost $7 billion for infrastructure projects — many of which turned into white elephants mired in corruption that sent Sri Lanka’s debts soaring.

Gotabaya Rajapaksa, 70, was the main lieutenant of Mahinda during his rein. He held the influential post of secretary to the ministry of defence and was responsible for the day-to-day control of the armed forces and the police.

Dubbed “The Terminator” by his own family, he is feared by foes as well as officials for his temper and authoritarian rule during Mahinda’s presidency. He faced several corruption allegations as well as court cases and is currently on bail. However, no prosecutions can proceed while he holds the presidency.

Basil Rajapaksa, 68, is known as the political strategist and managed the economy under Mahinda. He was called “Mr. Ten Percent” in a BBC interview in reference to commissions he allegedly took from government contracts.

But the subsequent administration failed to prove any allegations that he syphoned off millions of dollars from state coffers. He still faces several prosecutions for corruption and unexplained wealth.

The dual US-Sri Lankan citizen was left out of elected office in line with a 2015 constitutional amendment that prevents those with dual nationality from standing for office. He is credited as being the man who engineered Gotabaya Rajapaksa’s election victory on Saturday.

Chamal Rajapaksa, 77, was speaker of the Sri Lankan parliament when brother Mahinda was president. He was also a minister of shipping and aviation, and has held many other portfolios since entering parliament in 1985.

Formerly a police officer, he once served as a personal bodyguard of Sirima Bandaranaike, the world’s first woman prime minister. He does not face any prosecutions.

Namal Rajapaksa, 33, a lawyer by profession, is the scion of the family dynasty and the eldest son of Mahinda. He entered parliament in 2010 at the age of 24 to become the youngest legislator in the 225-member assembly.

During his father’s decade in power, Namal was highly influential although he did not hold any portfolio. During the former regime, he was accused of money laundering and other corruption and he is currently on bail.