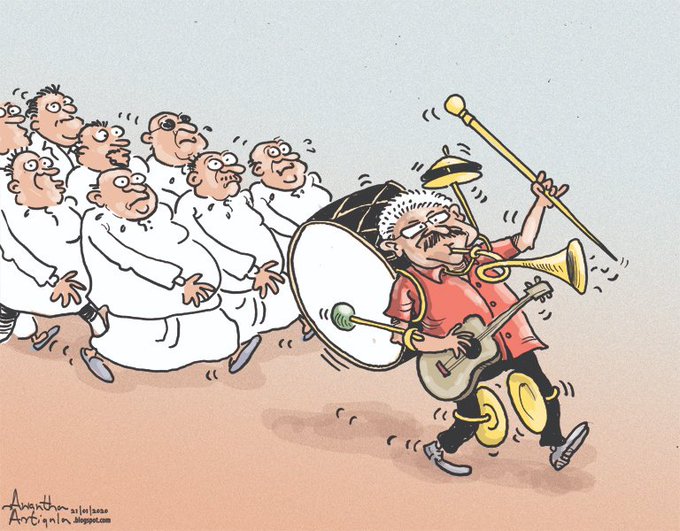 Since his election on 16 November 2019, Sri Lankan President Gotabaya Rajapaksa and his brother, Prime Minister Mahinda Rajapaksa, have initiated fundamental changes to policies on ethnic relations, the legacy of a 26-year civil war, and the rule of law. Mahinda had previously served as Sri Lanka’s president and Gotabaya as defence minister during the brutal final phase of the country’s civil war, when troops under their command, as well as the separatist Tamil Tigers they fought, are credibly alleged to have committed grave violations of the laws of war. The new Rajapaksa government has reversed or announced its intention to abandon many key legislative achievements and policy commitments of the preceding United National Party (UNP) government, including promises on post-war reconciliation, accountability and inclusive governance made to the UN Human Rights Council and to the EU. The shift in policy, rooted in part in the ethno-nationalism of many among Sri Lanka’s Sinhala and Buddhist majority, threatens to increase ethnic and religious tensions and dangerously weaken checks on executive and state power.

The changes pose a deep challenge to EU policy in Sri Lanka, which has supported ethnic reconciliation, human rights and political stability rooted in inclusive governance – and which now finds itself at cross-purposes with the country’s leadership. Against this backdrop, the EU and member states should continue to press Colombo to honour commitments made by the prior administration to strengthen rights-respecting governance and the rule of law, while making clear that the EU will not support programs that encourage political repression or discrimination against ethnic and religious minorities. Specifically, the EU and member states should:

Recommendations to the EU and Member States on Sri Lanka.

EU policies in Sri Lanka will not reverse Sinhala Buddhist majoritarianism, nor prevent the return to authoritarian rule that the Rajapaksas have already set in motion. Sinhala and Buddhist nationalism has deep roots, and challenges to Sinhala nationalism from outside Sri Lanka could further inflame nationalist sensitivities.

Nonetheless, stressing the dangers posed from abandoning commitments on reconciliation and the rule of law to all Sri Lankans – and particularly about the importance of keeping open democratic space so citizens can challenge discriminatory and militarist policies, and build cross-ethnic political alliances to counter ethnic polarisation – is important. The EU, together with Sri Lanka’s other international partners, can and should also work to ensure their funding or other support does not inadvertently help implement policies that further marginalise minorities and threaten their rights – and thereby increase tensions that exacerbate the risks of violent conflict.

The EU’s first challenge will come in late February, when the Human Rights Council considers the latest update report from the UN High Commissioner on Sri Lanka’s implementation of the 2015 resolution.

Should Sri Lanka put forward a resolution to formally repudiate and reverse 30/1, European members of the Council should throw their efforts into building a coalition able to win a contested vote. If Sri Lanka does not put forward such a resolution, members should reiterate their strong support for the reconciliation and accountability agenda agreed to by Sri Lanka as an essential element of the country’s long-term stability, while working toward a council coalition for follow-up action in 2021, when the current resolution expires.

The EU’s 2016 decision to reinstate GSP+ trade preferences to Sri Lanka … gave a significant boost to its economy.

The EU’s 2016 decision to reinstate GSP+ trade preferences to Sri Lanka, which gave a significant boost to its economy, was predicated on government commitments to implement a wide range of international human rights treaties. Particularly important was its promise to repeal the Prevention of Terrorism Act and replace it with new, human rights-compliant counter-terrorism legislation – a promise the new government reversed in January. The government has also rejected or appears unlikely to advance other rule of law and governance initiatives linked to GSP+ and discussed through the EU-Sri Lanka joint committee process – including prosecutions in the “emblematic cases”. After the biannual GSP+ monitoring report due in early February – which will consider only the previous government’s actions – the next report is not due until 2022. The European Commission and European External Action Service can use the leverage that GSP+ benefits provide by communicating in its next joint commission meeting and working group on governance that an informal review is already under way, and that the continuation of benefits hinges on whether the government corrects course and begins meeting commitments underlying the EU’s 2016 decision.

With the return to power of a government whose senior officials are credibly alleged to have overseen grave human rights violations under the claimed rubric of counter-terrorism, the EU’s funding for UN-administered Counter-Terrorism and Preventing Violent Extremism programs needs to be carefully reviewed to ensure strict human rights protections are in place, including respect for women’s civil and religious rights as outlined in UN guidelines.

The EU should make clear it supports the ongoing UN human rights due diligence review of its engagement with Sri Lankan security forces, and should avoid funding “deradicalisation” or “rehabilitation” programs targeted solely at Muslims accused of involvement in militant activities. The EU also should make clear to its implementing partners, UN Office on Drugs and Crime and UN Development Programme, that, if need be, they should redirect EU funding following a full review of their programs’ impact on conflict risk in Sri Lanka.

A full review of EU policies toward Sri Lanka and how they affect conflict risk and human rights probably will indicate that large portions of the UN-administered Peacebuilding Priority Plan (PPP) – a framework for coordinating international support to transitional justice, reconciliation and good governance, which the EU supports financially – will be difficult if not impossible to implement in the current political climate. The EU should support a full review and re-framing of the PPP in light of this and should consider prioritising support to human rights defenders and independent media. The EU’s conflict review should also extend to its development cooperation. Development assistance – either directly from the EU or through multilateral institutions that receive EU financing – could unintentionally support government-sponsored population transfers designed to dilute the Tamil majority in the northern province and parts of the east.