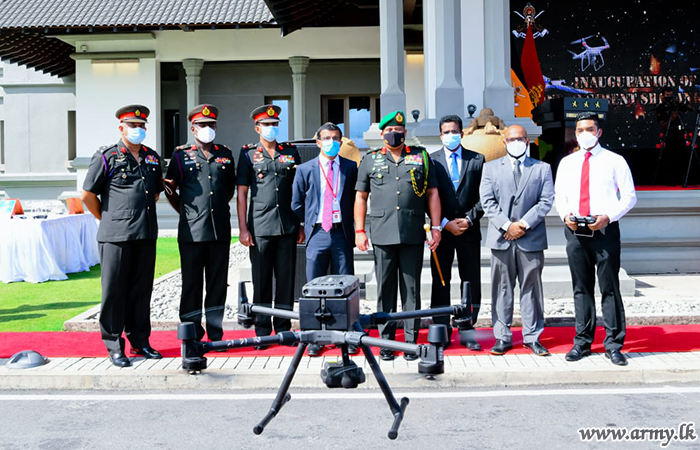 (sri Lanka Army/12th November 2020) Being geared to preparing the Army for the fast changing technological advancements and new challenges, the Sri Lanka Army in another milestone turning point formally raised its newest wing, 15th Drone Regiment of the Sri Lanka Artillery (SLA) this morning (12) during a brief ceremony at the Army HQ, headed by none other than its brainchild, Lieutenant General Shavendra Silva, Chief of Defence and Commander of the Army.

The new 15th Drone Regiment in the Sri Lanka Artillery is well-equipped with high-tech cameras that enable operations within short & medium distances and quadcopters with observation cameras for surveillance purposes in military or non-military applications. The incumbent Commander of the Army, to be in consistent with the Army’s ‘Way Forward Strategy 2020-2025’ and preparing the Army for any technical challenges or threats wanted this exclusive wing be raised in order for it to engage in reconnaissance duties, gathering of sensitive information, etc with a view to further strengthening national security needs and its concerns.

The Army is using consumer grade to industrial grade drones. What is being flown matters as much as who is flying it. The Army isn’t bound by existing @caaslofficial drone regulations which civilian operators have to abide by. https://t.co/ILbLHJA9cs

The military does NOT need CAASL permission to fly over crowds. They can fly farther (beyond visual line of sight). They can fly at night. None of these are possible for civilian flight operations w/out permission. VLOS completely prohibited for civilian operators. #lka pic.twitter.com/FOMJfCjYcW

Drone use for public surveillance by the govt, represents potential for both public good and public harm. Therefore, it can’t be safe unless properly regulated.

Here are 5 core recommendations for good legislation towards a more balanced approach.

1) Follow a property rights approach to aerial surveillance. This gives landowners the right to exclude drones etc. from a column of airspace from the surface of their land up to 350 feet above ground level. This helps address many feared harms.

2) Craft simple, duration-based surveillance legislation that limits the aggregate amount of time the govt may surveil a specific individual. Helps to address potential harms of persistent surveillance made possible with manned and unmanned aircraft.

4) Enact transparency and accountability measures, requiring govt agencies to regularly publish information about the use of aerial surveillance devices (both manned and unmanned).

5) Legislators should recognize that technology such as geofencing and auto-redaction may make aerial surveillance by drones more protective of privacy than human surveillance.

Drone use for public surveillance by the govt, represents potential for both public good and public harm. Therefore, it can't be safe unless properly regulated.

Here are 5 core recommendations for good legislation towards a more balanced approach.
[1/6]https://t.co/uWwsDop2Lu