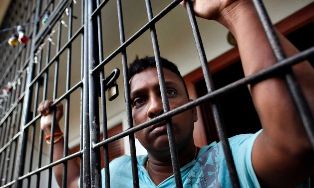 The politician knew something was amiss when a suspicious white van pulled alongside him at a Colombo park and four men got out, pretending to exercise. Ravindra Udayashanta alerted his supporters, and police. Soon, the gunbattle began.
In Sri Lanka, anyone who has crossed someone of importance is wary of white vans, said to be the vehicles of choice for shadowy squads who “disappear” opponents of powerful people. So, Udayashanta’s armed supporters immediately went into action.

“I heard the crack of a gun and I too pulled out my pistol and fired back,” said Udayashanta, who had been involved in a long-running dispute with another ruling party lawmaker over a business deal. Udayashanta’s brother already had disappeared — dragged away one month earlier, he says, by men in a white van.

But things went differently on this March day. Udayashanta and his entourage surrounded the men from the white van and captured them. Eventually, at gunpoint, the men acknowledged who they were: Sri Lankan government soldiers.

In a country where people had hoped the 2009 end of its bloody, long-running civil war would mean a return to normalcy — a country with a history of forced disappearances that stretches back to the 1970s — the open secret of the white vans has come to exemplify the terror felt by anyone who runs afoul of Sri Lanka’s rulers

For years, little solid evidence had surfaced on the abductors.

Then came the cases of Udayashanta and that of another man in recent months— an Australia-based activist who says he was freed from abduction only under Australian pressure — who survived to tell their stories. In Udayashanta’s case, police confirmed that the men in the white van were government soldiers.

But neither case has done much to overturn Sri Lanka’s apparent culture of impunity. Police said the soldiers who got into a gunfight with Udayashanta were actually searching for deserters. Officials say the investigation is continuing, though it’s unclear what — if anything — they are doing. Government leaders and the military deny any links to abductions.

Apathy on the party of many citizens over extralegal disappearances — and even tacit approval when criminals are nabbed — is partly to blame for their prevalence, said Ruki Fernando, an activist with the Sri Lanka human rights group Rights Now Collective for Democracy.

“This is a sign of an uncivilized and undemocratic society,” Fernando said.

Rights activists, opposition lawmakers and local journalists say top officials send abduction squads in white vans to disappear political opponents, activists and outright criminals. White vans are parked in front of the homes of government critics, in clear attempts to terrify them into silence. The citizen journalism Web site www.groundviews.com says that 58 people have disappeared over the past nine months. In at least 22 of those cases, witnesses saw the victims forced into white vans.

It’s not clear why white vans would be used, though many suspect it is because they are so common on Sri Lanka’s streets that they can quickly disappear into traffic.

Udayashanta branded the disappearances a form of state “terrorism.” He said the failure of authorities to fully investigate his case has robbed the country of its best chance so far to shed light on the white van abductions.

A town council chairman in the Colombo suburb of Kolonnawa, Udayashanta said he had been on alert since his brother had been grabbed, an act he took that as a warning from political rivals.

Then, in March, a white van showed up again while Udayashanta watched a sports match in suburban Colombo. He pointed out the suspicious men to his supporters and police officers, prompting the men to scatter, triggering the gunfight and the eventual confession.

Udayashanta’s entourage said the men were the same ones who had abducted his brother.

The group later handed the suspects to police, who promptly released them.

Another man — Sri Lankan-born Australian citizen Premkumar Gunaratnam — was abducted in April but released a few days later after protests from Australian diplomats.

The former Marxist guerrilla, who was active in an armed rebellion in 1988-89 and now lives in Australia, had returned to Sri Lanka to help start a new political party when he was snatched from a rented room in Colombo.

“All this happened within a few seconds … they stormed into the room and abducted me,” Gunaratnam told The Associated Press in a telephone interview from Sydney. “They tortured me, interrogated, mostly humiliated me — some sexual torture as well.”

His blindfold was removed long enough for captors to take a photograph, giving him an opportunity to see his surroundings, a well-maintained office with computers and stationery, Gunaratnam said.

His captors questioned him about the new party and whether he had links to the separatist Tamil Tiger rebels who were defeated in a civil war in 2009. Their manner suggested military backgrounds, he said.

“I knew about their language — the armed forces’ language— because I was in armed custody in 1989 as well. I knew their culture to a certain extent,” he said.

Back in Australia, Gunaratnam’s wife Champa Somaratne and at least one lawmaker, Greens party Sen. Lee Rhiannon, sounded the alarm about Gunaratnam’s disappearance. A few days later, the captors handed him to Australian officials at a Colombo police station, Gunaratnam said.

Australia’s foreign ministry would say only that it has urged Sri Lanka to “investigate fully all allegations of abductions.”

Abductions and killings also were linked to the Tamil separatist war launched in 1983, especially during the final years of the conflict. Victims ranged from suspected rebels, to journalists and human rights activists.

Though those conflicts have ended, the abductions have not.

Sri Lankan activists say victims in the past year include political activists, businessmen, suspected criminals, released former rebels and even a popular fortune-teller. Some bodies have been found, but the whereabouts of most remain unknown.

Ramasamy Prabaharan, a wealthy Tamil businessman, was abducted in February in front of his house, two days before a court was to hear his lawsuit against top police officers for torturing him over alleged links to rebels.

His wife, Shiromani, said a white van with armed men pulled up behind their car just as they returned home.

“Four of them got down and pulled my husband and he was holding fast to the gate. He cried out, calling for help. There was desperation and fear in his voice,” she said. “I know he was abducted because he had challenged top police officers in court.”

The Defense Ministry denied that solders were behind any abductions and said that only 18 people, not the 58 tallied by Groundviews, disappeared in the past nine months, most of them in crime-related incidents.

“Interestingly most of these figures are underworld characters involved in organized crime, drug trade, extortion, kidnapping and such anti-social activities,” the ministry said in a statement. “Fifteen of these 18 individuals are suspected to possess criminal backgrounds.”

Rohana, the police spokesman, said that resolved cases have indicated that most abductions were about private disputes over money.

“We have to free society from this fear of white vans,” Udayashanta said.