14 strong police team search Newshub.lk newsroom in an attempt to intimidate them. 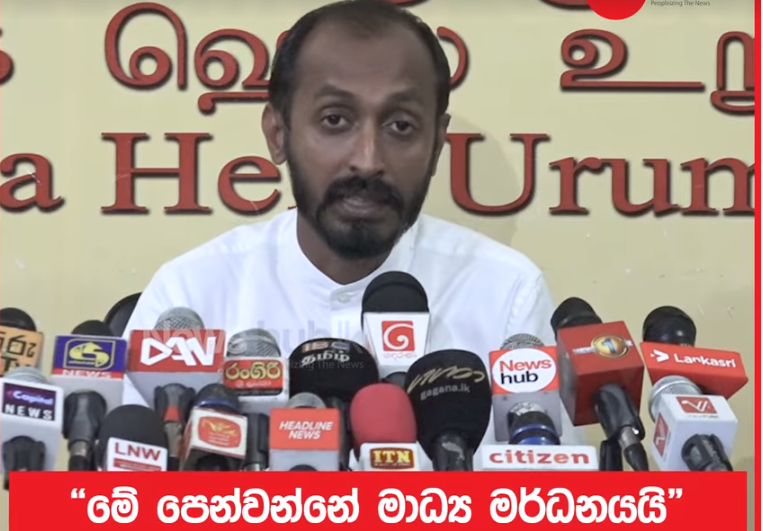 Image: This is a media suppression – Danushka Ramanayake.

A Police team from the Mirihana Police searched the newsroom of Newshub.lk this morning, investigating a complaint that there was material that could be classified as hate-speech the Police Spokesman SSP Ruwan Gunesekara  has told RepublicNext today (26).

He said police had obtained a search warrant from the Nugegoda Magistrate and carried out the investigation. No incriminating material had been found, Gunesekara has further said.

Speaking to press  former Media Director of the Ministry of Municipal and Western Development Danushka Ramanayake has said that a police team had  inspected  their political activities during the presidential election searching the newshub.lk.

Mr. Ramanayake had said that any attempt to intimidate such institutions without a valid search warrant was condemned.

Pointing out that it is a repressive policy, Ramanayake said there should be a formality to such an inquiry. The warrant the police team has produced at the Newshub was dated December 2018.  When asked who had made the complaint police team had not responded.

A vehicle with a journalist working for pro- Rajapaksa TV channel had had been waiting in front of the Newshub office while the police search was on going.

The police officers had typed the word “Gota” in the search bars of the computers to see whether there was any material regarding the newly elected President, Gotabay Rajapaksa in the servers, according to Ramanayake.

Mean while former FM Mangala Samaraweera tweeted that news reader of the theleader.lk has been question by the police for 8 hours today.

The witch-hunt has begun! Sanjaya Danushka, news reader for ‘https://t.co/aCT0owXFkH', a popular Youtube site supporting Sajith during the elections, questioned by CID for 8 hours. Ruwan Ferdinandez, my media chief, to be the next target?!?