13th Amendment could cause another conflict: Gotabaya Rajapaksa 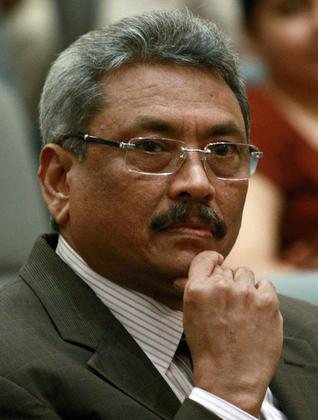 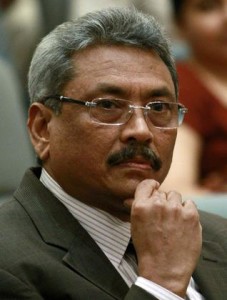 Gotabaya Rajapaksa
Gotabaya Rajapaksa
Sri Lanka’s Defence Secretary Gotabaya Rajapaksa has opposed the holding of Northern Provincial Council (NPC) elections, saying empowering a “hostile” provincial administration with land and police powers will have grave repercussions.
In a warning to the government on Thursday, he said: “police powers in the hands of those still pursuing a separatist agenda can pose a severe threat to national security,” according to national daily The Island here.
Mr. Rajapaksa was referring to the Tamil National Alliance (TNA), which many political commentators here believe is likely to win the election, should it be held in September.
The lead story in the daily appears to have been based on an exclusive interview, for it does not mention where he made the remarks. “I cannot impose my will on the political establishment. But I intend to tell those who still consider the 13th Amendment as panacea for all our ills, it’ll be the primary cause for another conflict,” he was quoted as having said.
His statement came a day after Petroleum Minister Anura Priyadarshana Yapa’s promise at a post-cabinet media briefing that NPC election would be held in accordance with the 13th Amendment.
Though the opposition to the 13th Amendment to the Constitution — that followed the India-Sri Lanka accord of 1987 — is not new in Sri Lankan polity, the last few days have witnessed yet another debate on the issue, with renewed vigour. The Jathika Hela Urumaya (JHU) and the Jathika Nidahas Peramuna (JNP) or the National Freedom Front (NFF) — both part of the ruling coalition — have been consistently pushing for the abolition of the 13th Amendment.
Bodhu Bala Sena (Buddhist power force), a relatively new Sinhala Buddhist organisation, too held a press conference to reiterate the point, observing that India, while pressuring the Sri Lankan government to implement the Amendment, did not consult the people of island nation.
Such attempts that seek the abolition of the 13th Amendment have not only sparked a fresh round of debate, but have also fuelled apprehensions about the much-awaited elections being held in September, as per the government’s commitment.
With more parties and organisations joining the chorus against it, concerns over NPC election only seem to be growing among sections pushing for the devolution of power.
It was in this context that External Affairs Minister Salman Khurshid spoke to his Sri Lankan counterpart G.L. Peiris over the telephone a week ago, reportedly emphasising need for Sri Lanka to implement the Amendment.
Amid growing apprehension, Sri Lanka’s Minister for Economic Development Basil Rajapaksa, who spoke to representatives of Indian media earlier this week, said it was ultimately President Mahinda Rajapaksa who would take a call in this regard. The government, he said, would consult all its allies and do what was best for the people of Sri Lanka.
Also, some politicians believe firmly that there are important reasons for the Sri Lankan government to hold the elections. Ramiah Yogarajan, parliamentarian representing the United National Party headed by former Prime Minister Ranil Wickremasinghe, said: “The international community is watching. UNHRC reviews will come up in September, and then in March. The Commonwealth Heads of Government Meeting [CHOGM] is also coming up. Elections will have to be held.”
The Hindu
Share
Facebook
Twitter
WhatsApp
Pinterest
Email