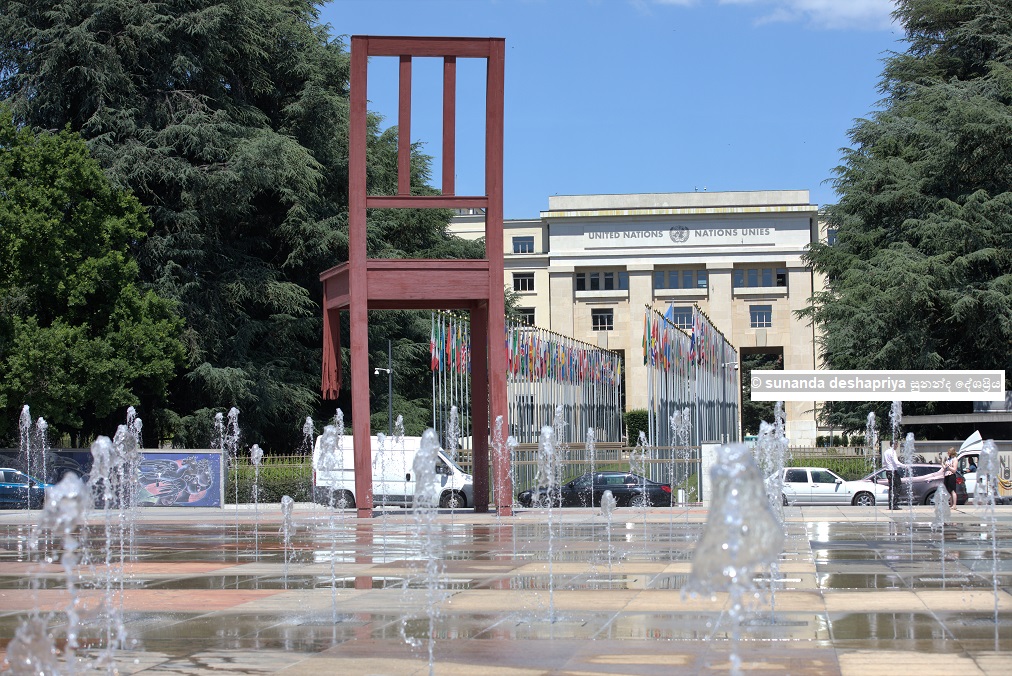 Written statement on “Unlawful arrest and detention of Hon. Rishad Bathiudeen, Parliament Member of Sri Lanka” has been  submitted to upcoming 47th session of the UNHRC; The session begins in 21st June.

The statement says that “Rishad Bathiudeen has been hounded repeatedly by the present Government continuously after he refused a direct offer to join in the Constitutional coup in 2018. His strong voice that has fearlessly stood for the oppressed against the arbitrary actions of the Government has been effectively silenced after his arrest.”

It further says that he was arrested without any Court Order, and in violation of the following laws.

And the statement expects  a positive response from the Office of the UN High Commissioner for Human Rights (OHCHR) and the Special Rapporteurs (SR) on the situation of human rights defenders and political activists.

The full text of the statement:

Promotion and protection of all human rights, civil, political, economic, social and cultural rights, including the right to development.
Written statement* submitted by Al Baraem Association for Charitable Work, a non-governmental organization in special consultative status
The Secretary-General has received the following written statement which is circulated in accordance with Economic and Social Council resolution 1996/31.
[26 May 2021]

Rishad Bathiudeen is a Member of the Parliament of Sri Lanka since 2001 and the Leader of a prominent minority political party. He has been very vocal against the state sponsored oppression against the minorities of Sri Lanka, particularly the Muslim community. Bathiudeen grew up as an Internally Displaced Person (IDP) after the Muslims were evicted by the LTTE from their homes in the North, and therefore understood and dedicated his life to serving people of all faiths in the war torn regions of the North.

On the 24th of April, at around 1.30 in the morning, the Criminal Investigation Department (CID) in Sri Lanka forcefully barged in to the residence of Rishad Bathiudeen, some of them jumping over the parapet wall, and demanded his arrest. His wife who proceeded to answer the door asked if there was a warrant for his arrest. However, the CID could not produce a warrant. It was followed up with another question, whether the consent of the Speaker was obtained to make his arrest, which is a Parliamentary privilege of Bathiudeen as a Member of Parliament. Again no reason was given by the CID. His brother, Riyaj Bathiudeen, was arrested in the same manner without any given reason. They were arrested without even affording them the time for their early morning meal (Sahar) during the holy month of Ramadhan. They were arrested without any Court Order, and in violation of the following laws.

He was later detained under the draconian Prevention of Terrorism Act, for up to 90 days with options to further detain him if they chose to. Although he was arrested with a sense of urgency, he was kept clueless as to the reasons for his arrest until the second day of his detention. He was questioned as to the circumstances surrounding calls he exchanged with the Additional Secretary to the Ministry of Industry and Commerce in 2019 when he was the Subject Minister.

Prior to this particular ordeal, which has drawn the attention of the investigating authorities, Colossus (Pvt) Ltd had dealt twice with the Industrial Development Board (IDB) in regard to the purchase of scrap metal. Both times, the IDB had supplied a mere 8.5% of the requirement of Colossus (Pvt) Ltd, despite recommendations from the Coordinating Secretary to the President and other high ranking officials. The supply of the remaining 91.5% of scrap metal was issued by other entities, some of which were Government owned, even though no investigation has been launched in that respect. Investigations have established that the sale of scrap metal was an ordinary course of business of the IDB and Bathiudeen was not involved in the transactions in any way.

On the matter in contention, Gazette No. 33/24 of 27th of April, 1979 provides that authority to issue recommendations for the licenses for the export of value added metal products lies with the Secretary to the Ministry. By the power vested in the Secretary, authority to issue recommendations for the issuance of licenses was transferred to the Additional Secretary. At the time, Colossus (Pvt) Ltd had been in the business of exporting wire rods for seven years prior to purchasing scrap metal from IDB. Three companies including Colossus (Pvt) Ltd were recommended for the issuance of licenses. Nobody was aware at the time that the owner of Colossus, Inshaf Ahamed would emerge as a suicide bomber. Therefore, the Secretary to the Ministry and Additional Secretary had only recommended the issuance of licenses in the course of their duties, and not otherwise. In respect of the calls under investigation, the Additional Secretary had contacted Bathiudeen in respect of other official matters. Nothing relating to Colossus or exports were discussed.

While Bathiudeen remains behind bars, without a reason worthy of arrest conveyed, Minister of Public Security, Sarath Weerasekera, again arbitrarily prevented him from attending Parliament on 4th and 5th of May. The Speaker had consented to Bathiudeen attending Parliament, which was duly conveyed to the Director of CID, but on the very morning, Rishad Bathiudeen was not brought to Parliament. The reason officially conveyed to the Speaker was that there were CoVid concerns after a wife of a member of the CID had apparently contracted CoVid, but no restrictions were placed on the movement of the CID nor was any measure taken to identify and quarantine any member of the CID. This is a blatant violation of Parliamentary Privilege. When he was brought to Parliament after the Speaker and Attorney General re-iterated that no impediment prevented Bathiudeen from attending Parliament, Bathiudeen pleaded that he should be produced before Court with any evidence pertaining to his guilt as soon as possible. He emotionally pleaded, “Give me the death sentence if I am found guilty. Do not politically persecute me out of political vengeance”. He said so because he was confident of his innocence.

His brother, Riyaj Bathiudeen was previously arrested on 14th of April, 2020 and detained for nearly six months on suspicion of the same calls. He was thoroughly investigated on his assets, transactions, phone connections and other related matters. Upon concluding investigations he was produced before a Magistrate and acquitted of all charges. However, he was arrested again on the same charges.

Rishad Bathiudeen has been hounded repeatedly by the present Government continuously after he refused a direct offer to join in the Constitutional coup in 2018. His strong voice that has fearlessly stood for the oppressed against the arbitrary actions of the Government has been effectively silenced after his arrest. He is known as a benevolent Leader who always tried to uplift the people. It is time for the people to stand by the Leader who fearlessly stood for them in their times of need.

The 9th article of the ICCPR (International Covenant on Civil and Political Rights ) ”prohibits arbitrary arrest and detention”. Therefore, we hope that the Council will urge the government of Sri Lanka to release Rishad Bathiudeen and his brother Riyaj Bathiudeen.

We look forward to a positive response from the Office of the UN High Commissioner for Human Rights (OHCHR) and the Special Rapporteurs (SR) on the situation of human rights defenders and political activists.