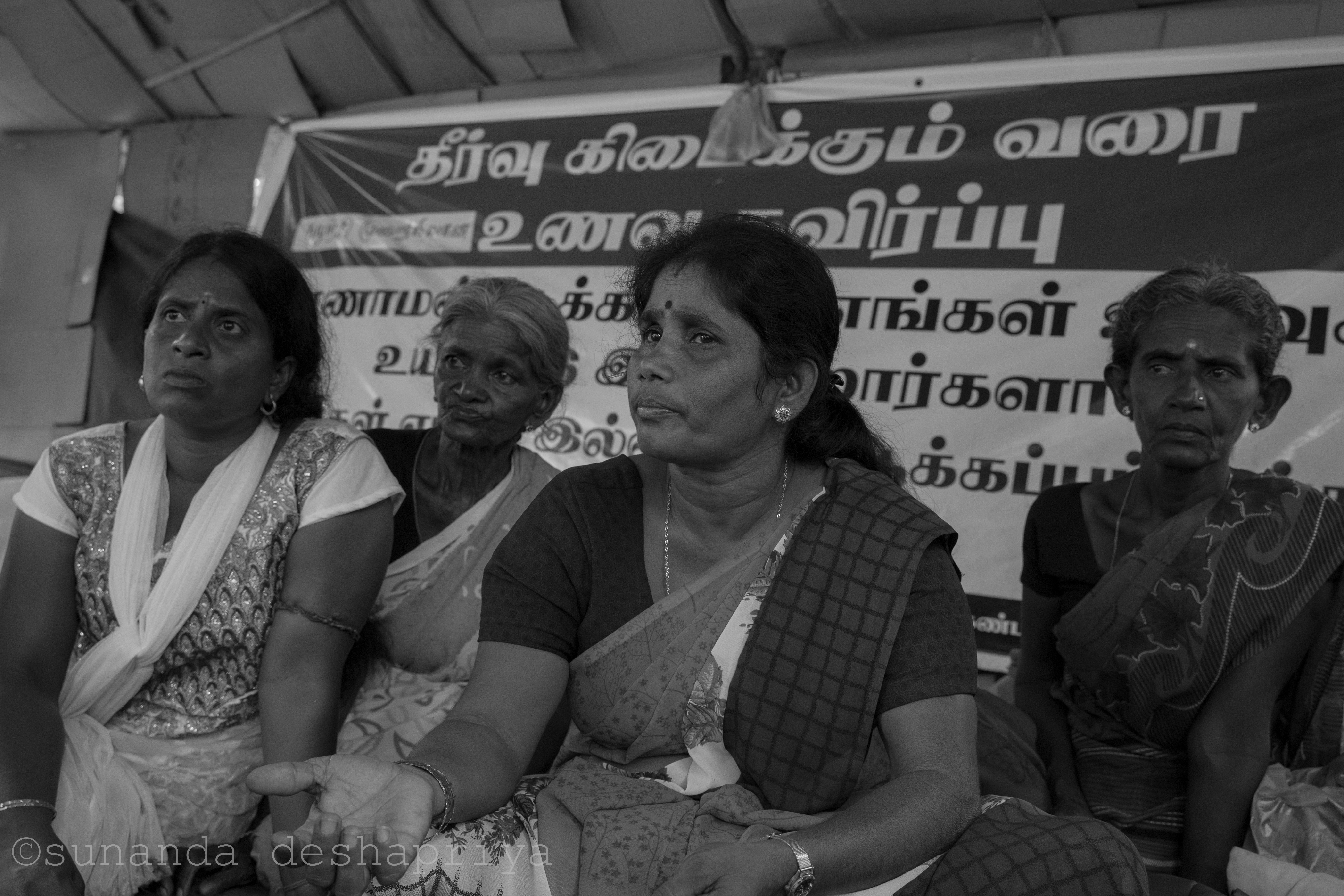 Yolanda Foster shares the experiences of women change-makers and the challenges they face as they continue to seek truth, justice and reparations for themselves and for their families in Sri Lanka.

This week Pablo de Grieff, the Special Rapporteur on Truth, Justice, Reparations and Guarantees of Non-recurrence, is visiting Sri Lanka to assess the implementation of Human Rights Council Resolution 30/1. Co-sponsored by the Sri Lankan government, the Resolution outlines a comprehensive set of steps required for transitional justice to become a reality. For many women’s groups the visit is critical as promised post-war reforms stall. In recent months a wave of women-led protests has swept across the north and east of Sri Lanka.  Women’s campaigns have focused on lack of reform of the security sector; impunity for gender-based violence and long held demands for truth about the disappeared.

The Special Rapporteur on Truth, Justice, Reparations and Guarantees of Non-recurrence meets with members of the Association for Relatives of the Disappeared in Kilinochchi. By Garikaalan.

In September I met a number of women activists including members of the Association for Relatives of the Disappeared in Kilinochchi.  In February the group set up a protest tent next to a temple in Kilinochchi demanding answers on the whereabouts of their loved ones. Their spokesperson, Mrs Kanagarangnei, notes they are still waiting for justice despite eight months of protests and clear calls to the President. One of the group’s main concerns is the fate of hundreds of relatives who surrendered to or were detained by the Military at the end of the war. In June, President Sirisena promised families of the disappeared he would order the release of lists but the list of surrenders has yet to be made public.

The President did endorse legislation to establish an Office of the Missing Persons (OMP). But women in Kilinochchi are not confident their perspectives on the OMP are really listened to. In discussions mothers had raised issues with the name. “Our children are not missing, we didn’t lose them they have been forcibly disappeared,” said one distraught mother. Another member of the Kilinochchi group insists the Office will only work if it has regional branches engaging meaningfully with affected families in decision-making not just gestures of consultation.

For women brave enough to seek answers there are costs. An activist from Mullaitivu, Mrs Mariyasuresh Easwary, spoke about intimidation as she shared her experiences of trying to find her husband. In 2009 Sri Lanka Red Cross informed her that her husband had been detained by security forces. When she tried to find out more the trail went cold and she has not heard from her husband since. She has raised his case repeatedly and organised protests with other mothers demanding clarification from the military about those who surrendered. In August this year she was attacked by unidentifiable persons and told to stop organising protests.

Organisations like the Women’s Action Network (WAN) note that women in the north and east, many of whom live in single headed households, are especially vulnerable to sexual harassment and gender-based violence given the ongoing militarisation. In districts like Mullaitivu where the military retain large camps and still occupy contested land, surveillance remains an ongoing problem. Yet despite impunity for sexual violence women continue to advocate for justice.

Mrs Ekneligoda campaigns for the truth

about Prageeth, her husband.

Over years of engagement with Sri Lanka I’ve been struck by the number of women change-makers speaking out despite fear of reprisals. During the war women were key advocates calling for peace. Post-war there have been extraordinary acts of courage by individuals and community groups. One example is Mrs Sandya Ekneligoda campaigning for the truth about what happened to her husband, dissident journalist Prageeth, who disappeared in 2010. She has faced repeated threats and acts of intimidation. These included protests outside the court where her husband’s habeas corpus case was being heard. During investigations the Police identified seven army intelligence officers suspected of involvement in her husband’s disappearance, she then became the target of a military smear campaign accusing her of supporting the Liberation Tigers of Tamil Eelam (LTTE). These challenges have not dampened her determination to press for answers and she continues to attend Court.

There has also been sustained community activism such as WAN campaigning against impunity for gender-based crimes. Across the years and despite adversity women have tried to access justice. They have filed police complaints; submitted cases to the National Human Rights Commission; written letters to members of Parliament and testified before numerous Commissions such as the Lessons Learned and Reconciliation Commission. Their activism has involved working with others including acting as community mobilisers during the Government’s consultation on transitional justice and discussions on the new Constitution.

Shreen Saroor, a key member of WAN, explains why this requires an understanding of structural barriers to achieving equality, “what we seek is transformative justice which is beyond transitional justice”. Based on a series of discussion groups across the country Ms Saroor notes “many women asserted they should be given equal opportunities in the decision-making processes and their participation should not be reduced to the symbolic expression of concerns such as victimhood, especially in male-dominated settings.”

Some concerns about the lack of security reform raised by women have been highlighted by human rights organisations like Amnesty International at the Human Rights Council. In a report that outlines key criteria for transitional justice mechanisms Amnesty highlights the the need to appoint the members of the Office of the Missing Persons in a transparent way ensuring an equal representation of women and men.

The legacy of agenda-setting activism by women in Sri Lanka has earned them a right to participation not just protection. Women should not be looked upon as ‘victims’ or ‘beneficiaries’ but equal participants and included as decision-makers and staff at all levels of the peace and justice process. Including women in decision-making forums will allow women to influence outcomes and enhance the likelihood of a durable and sustainable peace.

To make the Women, Peace and Security agenda a reality the Sri Lanka government needs to adopt a national action plan on Security Council Resolution 1325. In the absence of this firm national commitment the UN should fund more women’s organisations directly. A positive step forward is the recent inclusion of quotas for women in local elections but to achieve a sustaining and durable peace more needs to be done. Groups like the Women and Media Collective are calling for an independent Women’s Commission to be established.

The Special Rapporteur is meeting with stakeholders across the country including civil society and government officials this week. When he holds his press conference on Monday (23 October) women activists hope he calls for better access for women to truth, justice and reparations. “We will keep pushing for the government to implement the promises made in the Human Rights Council resolution,” says Mrs Sandya Ekneligoda. “We women are fighters and want a say in how to shape the new institutions that make claims to help our lives. Our activism should light a fire in the imagination of policy-makers. If our country is serious about peace it needs to value the women who campaigned for it”.

Yolanda Foster is an independent expert on South Asia and a Visiting Fellow at the LSE Centre for Women, Peace and Security. She has worked with the South Asia team at Amnesty International and led transnational campaigns for justice, including advocating for an independent investigation into allegations of war crimes in Sri Lanka.