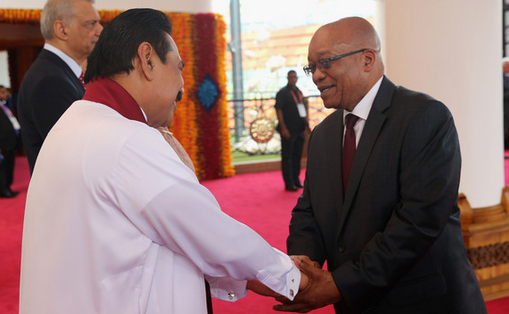 Upul Joseph Fernando
Mahinda seems to have hit upon the idea of a new strategy to counter the looming threat of the United Nations Human Rights Council (UNHRC), adopting another damaging resolution at its upcoming March 2014 sessions. This new strategy is to accept the involvement of South Africa in the reconciliation process, as it had evidently shown much interest in it from about 2012. South African Ambassador in Sri Lanka at the time was the key player in setting the diplomatic ball rolling in that direction, by encouraging and organizing a visit by the South African Deputy Foreign Minister to the country, on a sort of fact-finding mission.

As a result of these diplomatic moves, South Africa’s Deputy Foreign Minister, Ibrahim Ibrahim, and a delegation paid a visit to this country and made contact with Defence Secretary, Gotabhaya Rajapaksa, in the first instance, and thereafter with R. Sampanthan and others of the Tamil National Alliance (TNA). South Africa’s Deputy Foreign Minister had made a proposition to Sampanthan that they were willing to act as intermediary to start reconciliation talks between the government and the TNA. Covert moves made by South Africa came to the open when the TNA divulged the news to the media. The government was disturbed by the news of unilateral action South Africa was pursuing, seeking to mediate in Sri Lanka’s reconciliation process. As a counter to such unsolicited action from any quarter, the government issued a statement under the hand of External Affairs Minister, G.L. Peries, that Sri Lanka does not need the involvement of outsiders in its internal affairs.

Notwithstanding this diplomatic reaction from the government over South Africa’s interest in being involved in the reconciliation process, this matter later assumed even bigger importance due to the CHOGM. The government wished to have the presence of all African Commonwealth Nations at the CHOGM and South Africa’s help in this matter was crucial. Its President, Jacob Zuma, not only confirmed his participation in advance; he also promised to help get the other member countries in the continent to participate.

When the South African President met Rajapaksa, on the sidelines of CHOGM and offered to help, the President set up a Truth Commission in Sri Lanka, on the lines of the one South Africa had used to arrive at reconciliation in their country. Rajapaksa was receptive to Zuma’s proposal and had agreed to look into it seriously. The Sri Lankan President’s positive response to the South African President’s proposal coincided with the British Prime Minister, Cameron’s controversial pronouncement of a deadline for Rajapkasa, to act in respect of reconciliation. It was also at this time that Rajapaksa had expressed his wish to set up a Truth Commission here, which was identical to the one held in South Africa. Cameron had noticeably mellowed his rhetoric in relation to this matter. Going a step further, Britain has invited the TNA to a visit that country to discuss matters further, prior to the involvement of South Africa in the contemplated process. The TNA had however said that, before taking any action in regard to this matter, they will first consult India. With the setting up of Northern Provincial Council (NPC), India has already moved ahead towards a reconciliation process in the country. India is awaiting government action for the devolution of land and police powers to the NPC. Rajapaksa is well aware that India will tighten the screws if those powers are not devolved to the Northern Provincial Council before UNHRC sessions come up in March next year. India’s agenda in relation to this matter is entirely different from what South Africa will try to achieve. They will be concentrating more on bringing about reconciliation between Tamil Diaspora and the Sri Lanka Government. The 13th Amendment is not an important issue as far as South Africa his concerned.

President Rajapaksa is alive to the fact that any discussion with South Africa at this stage will take a long time, giving him ample breathing space. In light of the above, it can be safely assumed that Rajapaksa will agree to a South Africa sponsored Truth Commission for reconciliation.

Meanwhile, the TNA is trying to obtain India’s help to push the 13A to the fore in South African agenda. If the UK and the US gives their (crucial) support for the Truth Commission to be sponsored by South Africa, as to what action Mahinda will take is not clear as this point in time. In this context, the Australian PM’s advice to Rajapaksa to go along with South African sponsored Truth Commission assumes considerable importance.