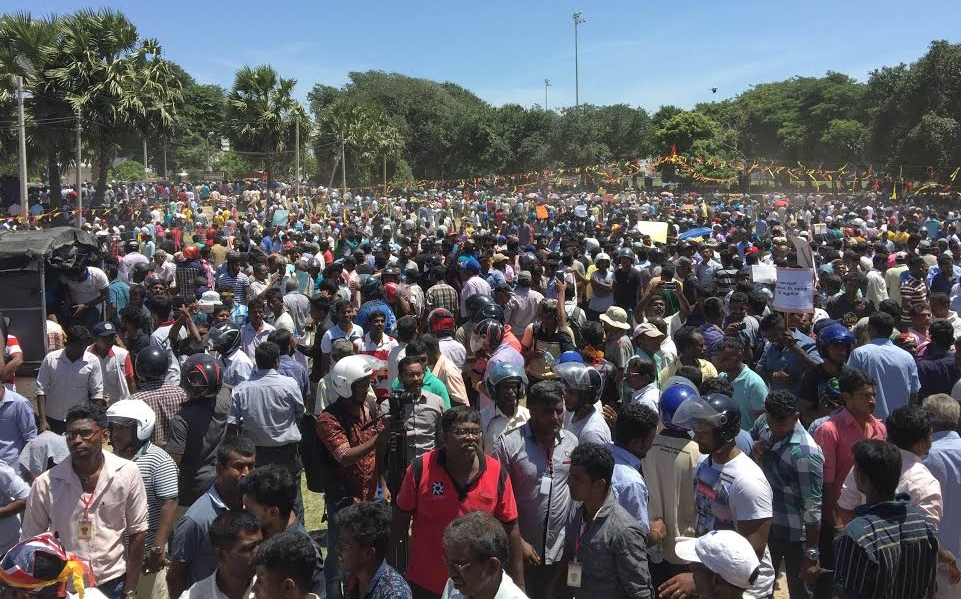 COLOMBO: The Chief Minister of Sri Lanka’s Tamil majority Northern Province, C.V.Wigneswaran, on Saturday gave a clarion call for a people’s movement to raise issues pertaining to the Tamil people and thereby strengthen the hands of their elected representatives.

Speaking at the “Ezhuga Tamizh” (Tamils Arise) rally at Jaffna, Wigneswaran said that the problems of the Tamil people cannot be solved just by getting elected to parliament or the provincial councils. They can be solved only by a people’s movement. Elected representatives cannot deliver the goods unless backed by a peoples’ movement, he said.

Wigneswaran said that he agreed to co-chair the Tamil People’s Council (TPC) because he saw the need for a non-partisan peoples’ forum to discuss and highlight the common problems of the Tamils. The “Ezhuga Tamizh’ rally and movement also have the objective of creating an awareness of the Tamils’ problems among the Tamils, the Sinhalese majority, and the international community.

Wigneswaran made it clear that the “Ezhuga Tamizh” movement is not against the Sinhalese people, the Central government in Colombo or the leaders of the Ilankai Tamil Arasu Katchi (ITAK). Its only aim is to highlight the grievances of the Tamils, sensitize Sri Lankans to issues troubling the Tamils and ask for a solution, he said.

Referring to the ITAK’s argument that agitations of this sort will activate the anti-Tamil sections of the majority Sinhalese community and force the government to go back on its promises to the Tamils, Wigneswaran said that this argument for restraint does not hold water.

Wigneswaran pointed out that since the war ended, and even after the Sirisena-Wickremesinghe government was established in 2015, the condition of the Tamils has not improved. Vast tracts of lands are still in the hands of the army. Army has entrenched itself by indulging in civilian activities. Buddha statues are mushrooming in areas where there are no Buddhists. Ten thousand Sinhalese families have been settled in Tamil areas with an intention to change the ethnic ratio. Myliddy harbor is still out of bounds to Tamil fishermen. Fishermen from the Sinhalese South are being settled in Mullaitivu with the Security Forces’ help.

No effort has been made to release LTTE cadres even seven years after the war. The Prevention of Terrorism Act is still in the statue book. After the war, there have been 17 registered cases of torture. There is no sign of an hybrid Judicial Mechanism to try war crimes cases. The Office of Missing Persons is still to take a concrete form.

The Central government does not consult the NPC on any projects. Circumventing the NPC several projects like the Kerativu salt manufacturing facility has been established, Wigneswaran said.

According to reports, 3,000 to 5000 people took part in the “Ezhuga Tamizh” rally held outside the Jaffna Fort. All shops in Jaffna were closed, even though the Jaffna Chamber of Commerce, headed by an ITAK sympathizer, had opposed the strike call.

The rally and the strike have exposed the weakness of the ITAK ,the dominant party in the Tamil National Alliance (TNA). “Ezhuga Tamizh” is a wake up call to the ITAK to get its act together. It has reasons to ask for time to tackle the Tamils’ problems and to see that the friendly Sirisena government is not put in a tight corner politically. But it has to find ways to get round this constraint and effectively take up the Tamils’ issues if it is not to lose the people’s trust.

However, ITAK supporters say that the rally only showed the existing and well defined strength of the TPC and its co-chair, Wigneswaran, which is not much as past elections have shown. As an independent political analyst put it, in the past too, people had criticized the ITAK and blamed it for their woes, but when it came voting, they always voted for the ITAK, the oldest surviving Sri Lankan Tamil party.