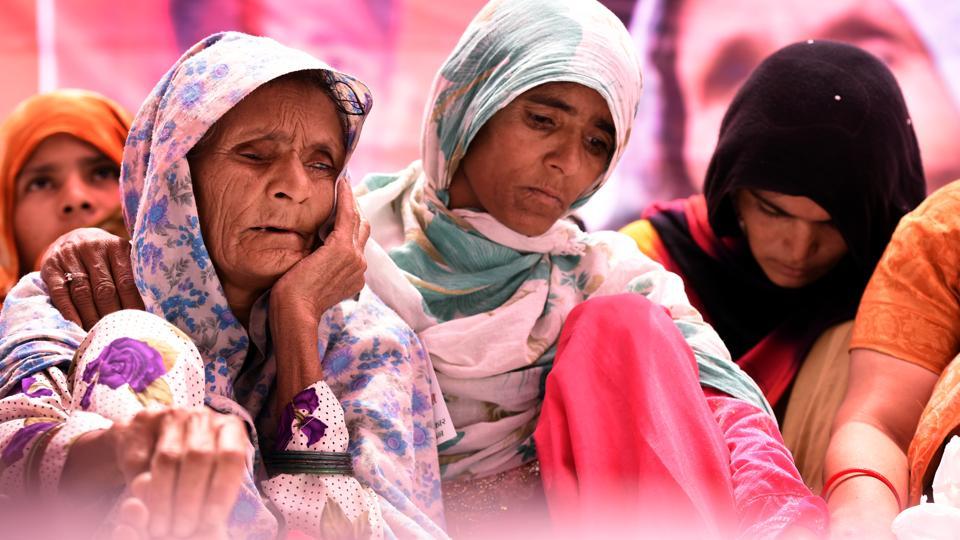 Image: Family members of Pehlu Khan, a dairy farmer who was allegedly lynched by vigilantes for transporting cows in Rajasthan in April, sit on a dharna to demand justice for him. In recent months, a string of deadly mob attacks on Muslims has triggered outrage across India, with critics accusing the Narendra Modi government of not doing enough to stop these assaults. (HT file).

The Opposition is powerless, the police are bystanders, courts have not shown interest and the BJP feels it will no longer lose elections.

There is no doubt that a form of medieval madness has taken over India in the shape of Islamophobia and regular lynching of Muslims in different states. The situation has moved quickly from not renting out homes to Muslims to refusing to tolerate their presence in public spaces. Muslims are being taunted on trains and streets, fights initiated and lynched. The lynchings have become so common that we do not know which one to respond to. Should we weep for Mohammad Naeem in Jharkhand or Hafiz Junaid in Haryana? How many remember the details of Pehlu Khan’s murder in Rajasthan? Mohammad Akhlaq is now just another milestone in this steady journey of wanton death. Many on social media who were horrified by Srinivas Kuchibotla’s murder in the US in February are strangely muted about the lynching of Muslims in India.

There is scarcely a word of condemnation from the BJP’s leadership. Forest fires in Portugal get more notice from this government than the ravaging of India’s social fabric that has taken centuries to nurture. Rather than express concern – let alone enforce the law – the Union Cabinet and BJP leaders found a way to signal to gau-rakshaks that they are on the same side. They skipped President Pranab Mukherjee’s iftar reception at Rashtrapati Bhavan in an unprecedented flouting of convention and political grace. The politicians are essentially conveying to the vigilantes that they too have such contempt for Muslims that they’d rather not be seen in public breaking bread with them.

The striking thing about vigilantism now is that there is no incentive for the BJP to make it stop. The Opposition is powerless, the police are bystanders, courts have not shown interest, the ruling party feels that it will no longer lose elections and so it has no dread of the hustings.

There is also notably no fear of violent retaliation. Muslims in India are effectively hostages in their own land, unable to take on a section of the majority that is fortified by a State that looks the other way in the face of gratuitous violence. Vigilante violence also tests the bonds of transnational Muslim solidarity. Ordinarily, Pakistan and Pakistan-based terror groups would use violence or the threat of violence as leverage over the Indian government to bargain on Kashmir or relax anti-Muslim policies elsewhere. (The 1993 Mumbai blasts were a reaction to the riots that targeted Muslims in December 1992 and January 1993.) But Congress and BJP governments react very differently to terror attacks. The Congress is weakened by them while Hindu nationalists are bolstered by them. In the current climate attacks can provide the excuse for more bloodletting and subsequent consolidation of Hindu identity. That’s the bind Hindu vigilantes put Islamabad and the Lashkar-e-Taiba (LeT) in.

There is thus a deterrence at play here for the vigilantes to exploit. But deterrence breaks down sometimes, which also works for the BJP. The Pakistani army and the LeT may have a measure of geopolitical reason, groups like Islamic State may not (which is why we are hearing more about IS as a threat to India lately). When terror attacks happen in India or where there is a spike in militancy in J&K as is expected they can quickly change the direction of the debate and harden middle class attitudes towards Muslims in general.

To get a sense of this, consider what happened in Kashmir over the last year. Security forces reacted excessively to the outpouring of grief following Burhan Wani’s killing last July, firing live ammunition and pellets at civilian protestors that left about 100 people dead, blinded many and partially blinded hundreds. The debate has now moved away from the high civilian toll to a representation of stone-pelting youth as terrorists. This was achieved through sheer repetition in the public sphere, with no quarter given to Kashmir’s complex past or its suffering. Over the last month, the government has come under criticism over Major Leetul Gogoi tying Farooq Ahmad Dar to a jeep, but suddenly a crowd in Srinagar lynches deputy superintendent of police Ayub Pandith – an act widely condemned by Kashmiris – and now it becomes difficult to get the focus back on State action. In other words, one act is enough to draw an equivalence and gloss over a lengthy, bloody past and turn the debate in the direction the government wants.

We are likely to see more Ayub Pandith moments in Kashmir and other states of India. No one outrageous act will be allowed to build up for too long; there will either be another distraction, another outrage – either by design or the logic of circumstances. Paresh Rawal’s tweet on Arundhati Roy ensured that attention was diverted from pictures of Naeem drenched in his own blood.

Lynching not only acts out hatred for Muslims, it also serves to generate support, acquiescence and fear among the different constituents of the Hindu middle class. The key sources where this cohort picks up independent, contrarian views – universities, media, writers, filmmakers and artists – are being tamed. Throw in the spectre of open violence on the street and its compliance is assured. It is very easy to silence people when there is no rule of law. A troubled conscience unsure of peer support is often no match for a frenzied and organised political force. Many will flit between fear and helplessness (about lynching) and rage (about violence in Kashmir). It’s a condition geared to produce moral flight and political apathy, which suits the BJP as it seeks to quickly consolidate Hindu identity. Sunil Khilnani famously wrote in The Idea of India that “in a fundamental sense, India does not merely ‘have’ politics but is actually constituted by politics.” Right now the possibility of politics is being threatened by organised fear.