Why Pillay should raise media freedom 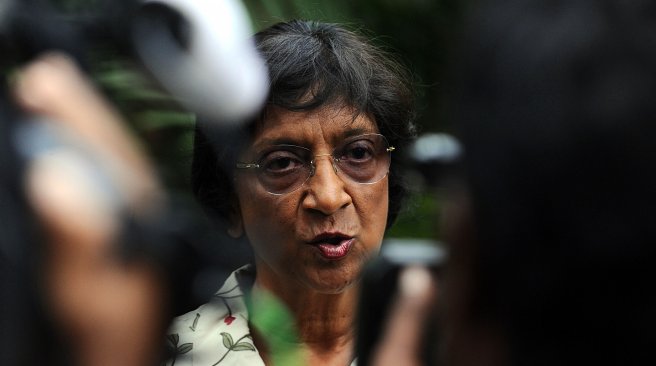 Ceylon Today Editorial
The visiting UN High Commissioner for Human Rights, Navanethem Pillay, who is in Sri Lanka on a week-long official tour, is expected to meet a motley group of people representing the government, including the Head of the State, the opposition, civil society, Tamil political parties, media and so forth. 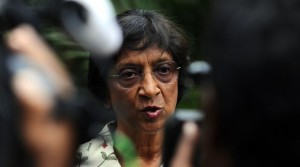 http://srilankaguardian.org/
Pillay’s visit caused ripples within the government, soon after her office in Geneva announced her official tour, some weeks back. Within days, the President appointed a special commission to inquire the disappearances and abductions that took place during the height of war. Last week, the Police Department was, suddenly, brought under the newly-established Ministry of Law and Order. Both those measures were, in fact, part of recommendations made by the Lessons Learnt and Reconciliation Commission (LLRC), nearly two years ago.
Earlier, in March this year, the UN Human Rights Council (UNHRC) in a resolution called upon the government to implement the recommendations of the LLRC. Now, Pillay is here to assess the country’s human rights record and the progress in the implementation of the recommendations of the LLRC. Hence, the sudden interest in the government to address those long-neglected human rights and governance related concerns.
In this backdrop, the existential grim realities in the media landscape loom large. Pillay should listen to the media fraternity in this country, who against many odds, had refused to bow down to the powers that be. It is media that remains one of the last functioning pillars of democracy in the country and unearthed much of the incriminating evidence of violations of human rights and civil liberties. For simply doing their job, those scribes were assaulted, abducted, killed and forced into exile. It was not long ago that the reporters risked the wrath of the military in order to report the mayhem in Weliweriya. Their reportage caused a public outrage over the military excesses, triggered a debate on the militarization in the society and prompted the government on a damage control offensive, which culminated in an Army Court of Inquiry, a rare act on the part of the security establishment.
Media in this country has shown enormous resilience in the face of multiple threats. Those threats vary from the prevailing climate of impunity enjoyed by the perpetrators of violence, the concentration of media ownership with the individuals closely associated with the incumbent regime, State interference with the editorial content, through multiple means, the absence of a Right to Information Law, the safety of media personnel and so forth. It is against those odds that media in this country strives to be independent, vocal and outspoken; and in terms of those attributes, the local press has fared much better than many of their counterparts in Asia.
It is important that the visiting UN Human Rights Chief be cognizant of the existential realities of the media landscape. When she meets the government authorities, Pillay should bring up those concerns that beset media freedom in this country, one of the oldest democracies in South Asia. It is within her mandate to demand that the Government of Sri Lanka ends the prevailing culture of impunity and prosecute the killers and abductors of scores of scribes and many thousands of Sri Lankan citizens.
It is definitely within Pillay’s mandate to ask the government to ensure the safety of media personnel so that they would be in a position to carry out their duties with a sense of security, without looking over their shoulder.
Pillay should also remind the Government of Sri Lanka that many recent democracies have enacted legislative provisions enabling right to information of their public. Nepal and Bangladesh are two recent examples. The Government of Sri Lanka has obstructed the passage of the Right to Information Bill that was presented by the Opposition.
The UN Human Rights Chief may not be able to convince the intransigent government to deliver on all measures. But, she may, at least, succeed in forcing the government to address some concerns as per press freedom.
Share
Facebook
Twitter
WhatsApp
Pinterest
Email