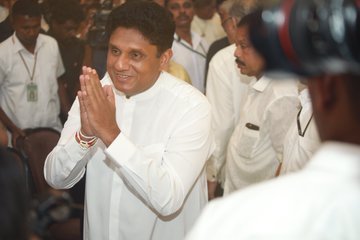 Sajith Premadasa hasn’t killed anyone, he’s a Sri Lankan citizen and he has political experience, so he has my vote by default. That’s how low the bar is, and gives you a sense of his main opponent. I’m happy to vote for him because he’s young, he’s pro-poor, and he has good people around him.

I’m getting more and more radical in my old age and have quite considered voting for Anura Kumara Dissanayake of the JVP. The JVP has some statist economic ideas, but more than that, this is still a two party system. I hope that this changes (green party anyone?) and I’ll strongly consider the JVP in the Parliamentary Election, but the fact is that we have a pretty clear choice between democracy and facism, and the third door also leads to facism. The JVP has become the moral voice of the nation and it’s sad that the fellowship has broken.

Would I ever vote for Gota and the SLPP? The funny thing is, before the coup even I had considered it. This government has sucked, but the coup reminded me that it remains a democratic government. Gota promises to fix that with authoritarianism, but by what authority?

He himself is a not a Sri Lankan citizen (by any standard that applies to you or me) and drags a trail of lawsuits and crimes and criminals behind him. His economic policies do not compute and involve just running up more debt, which this government has painfully tried to pay off. And he is surrounded by bad people, which makes him a bad President. Furthermore, he cannot answer questions without turning to his brother can is afraid to face any public debate.

The SLPP says they’re the national security party, but it was their coup and their lackey Sirisena that crippled national security leading up to the Easter Attacks. It was they who peddle racism and encouraged race riots that further destabilized the country. They provide protection only in the sense that the Mafia does.

But that of course is not enough. The 2015 was an election against the Rajapaksas, projected onto a blank slate (Sirisena). 2019 has to be something more. Sajith has to stand on his own.

I went to see him speak and initially felt like I had been hit by a thesaurus, but during one-to-one questions he actually shines. He listens and answers questions directly, even if it’s not a crowd-pleasing answer. A politician can’t actually know everything, a big part of their job is listening, and Sajith seems able to do that. For me that’s a big plus. I think it’s the most important trait in a leader.

Who is he listening to?

Then who is he listening to? Sajith is surrounded by the best of the UNP (Mangala, Harsha, Eran) and not the worst (Ravi). More importantly, he has spent his career with the poor and can speak to and listen to them. Like he father he has been obsessed with building houses, a somewhat quaint occupation when politicians are unveiling airports and phallic towers, but it’s something that matters deeply to people. I think he’s listening to the right people. I think he’ll listen to us.

What are they saying?

Sajith’s manifesto is essentially democratic socialism. At the basic level he respects the Constitution and our institutions, and will continue the process of improving them. For example, rather than just being a tough guy, he talks about formalizing the National Security Council and sharing intelligence — the actual institutional problems that led to the Easter Attacks. This is how democracies protect themselves, and fear and authoritarianism is how they are destroyed.

The socialist part is that there are a lot of giveaways to, especially, the poor. Universal pre-school, housing for all, seed paddy and fertilizer, etc. My sense is that governments will always spend money. Better on the poor than on concrete and vanity projects.

For me the personally vital things are the points on climate change — he’s committing to 100% renewable energy by 2040 and making climate change a big part of our foreign policy. We have to do this, because we are going underwater by 2050.

Sajith has the most sticky wicket you could imagine. The UNP government looked mordibund before the coup, and after the coup people have lost lives, jobs and many people have been thrown into poverty. People feel unsafe, poorer and ready for a change. And Sajith is technically running from the ruling party.

However, the SLPP has controlled the President since the coup and cause much of this economic and physical damage through sabotage. They should not be rewarded for this.

The other factor is that Sajith is also somehow an opposition candidate, because the UNP leader definitely did not want him to run. Sajith had to fight Ranil Wickremesinghe to get this nomination, much to the party faithful’s delight, and he does promise a long-needed internal change.

The polling I’ve heard about is close or Sajith slightly behind, with AKD’s third party complicating things. It will be a tight election and I think Sajith is the underdog.

The fact is that we have a choice between democracy and facism this election, between our institutions and a family, between laws and criminals. It is also a generational choice, between a 72 year old from a political/crime family and a 52 year old whose father was assassinated before he started his career.

Sadly the fellowship that kicked out the Rajapaksas in 2015 is broken, and it seems like we’ll have to renew our committment to democracy forever because they keep reproducing. But that committment should be renewed. Our democracy is imperfect but it is Asia’s oldest. Along with our rights and our environment, this is what we leave our children. These are precious things and worth voting for.

Sajith Premadasa is the democratic candidate, he listens, he has good people around him, and he has good ideas. He has my vote for 2019. I hope you’ll deeply consider yours.