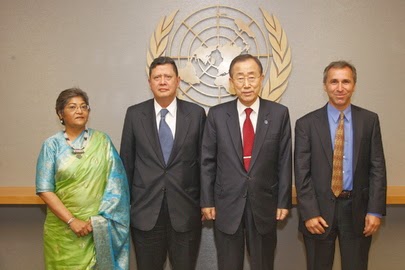 Marzuki Darusman, Steven Ratner, and Yasmin Sooka
Contributed to The Globe and Mail
Five years ago, Sri Lanka’s civil war reached a bloody conclusion on a stretch of beach in the island’s northeast, as government forces pummeled the remnants of the Liberation Tigers of Tamil Eelam and thousands of Tamil civilians trapped near them. The government of President Mahinda Rajapaksa, flush with triumphalist fever, insisted it had done no wrong during that fateful campaign. But the survivors told a different tale. Indeed, tens of thousands may have perished during the last phase of the war.
Three years ago, the three of us, appointed by Secretary-General Ban Ki-Moon to cull the evidence and advise him on holding both sides accountable for those atrocities, recommended that the Sri Lankan government investigate war crimes and that the UN step in with its own international investigation if the government failed to do so. While our report garnered support within Sri Lankan civil society and abroad, the government rejected it as a sort of plot by LTTE sympathizers. In a clear sign of international frustration with the government, the UN’s Human Rights Council in Geneva urged Sri Lanka in both 2012 and 2013 to investigate the events at the end of the war. The UN’s top human rights official, Navi Pillay, visited the country last year, telling Mr. Rajapaksa that an investigation was long overdue. This year, with no further progress, she too called for an international investigation.
Meanwhile, the human rights situation continues to deteriorate, as opponents and journalists disappear, the Tamil areas in the north remain highly militarized, survivors live in fear, and many missing from the war remain unaccounted for. Last year, the government engineered the removal of the supreme court chief justice, silencing a rare independent voice. The peace in Sri Lanka about which the government brags is based on conquest and fear. It could not be more the opposite of the peace based on truth, justice, and reconciliation that Nelson Mandela insisted upon for South Africa; and the fate of those two states could also not be more divergent.
This week, the Human Rights Council will vote on a resolution submitted by the United States and other states that would ask Ms. Pillay to conduct a UN investigation of alleged rights violations by the government and the LTTE.
While not as formal as a freestanding commission of inquiry like that for Syria, this mechanism could finally provide the independent investigation that is long overdue. It will need a budget and staff sufficient to the challenge of investigating the events of 2009.
Sri Lanka has deployed its diplomats worldwide to try to persuade the developing states on the Council that an investigation by the UN is an attack on Sri Lankan sovereignty. But Sri Lanka has agreed to all the human rights standards that the UN investigation will apply. And a UN inquiry will ascertain the facts without prejudice.
Members of the Council should give the UN investigation not only their vote, but the financial support it will need to carry out a careful inquiry. With such a record, the denial by the government and LTTE sympathizers can finally be addressed, and the task of justice for Sri Lanka’s victims can enter a new stage.
Marzuki Darusman is a former attorney-general of Indonesia. Steven Ratner is a law professor at the University of Michigan. Yasmin Sooka is the executive director of the Foundation for Human Rights in South Africa. They served as the UN Secretary-General’s Panel of Experts on Sri Lanka in 2010-11.