When Aussies do it – Sri Lankans condemn; When Sinhalese do it Sri Lankans go into hiding! 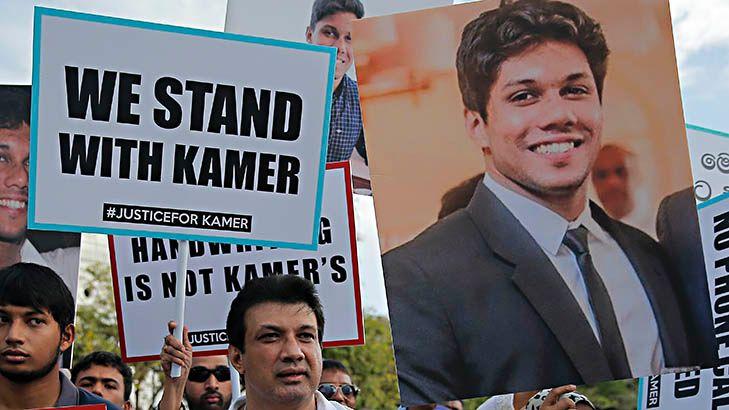 [Nizamdeen’s bail conditions prohibit him from leaving the country or contacting UNSW staff or prosecution witnesses.]

Now that the Police have charged Nizamdeen on the basis of the Notebook, they have the responsibility to seek as much as they can, the owner of the mind that wrote the messages / plans in the notebook. This may include Nizamdeen or if not lead to the real person or at least the cause. The ‘cause’ is the most important discovery we need to make. Otherwise there is bound to be greater anxiety in the minds of Australians who feel naturally connected to the NSW Police. The University of NSW has the responsibility to seek until it finds the Truth. This may be not a particular person or group – but themselves – especially their genes that keep surfacing such outcomes when a negative force in terms of Security – is activated. Nizamdeen himself may be infected by the virus carrying that lower mind-order while working in higher common area. If so – the institutions concerned – the UNSW and the NSW Police, have to be held responsible for the joint project in which Mr Nizamdeen played a leading role.

The dependent mind could be infected by imaginary outcomes until nothing else exists to that mind. That is how suicide bombers are made.

As per my experience with the combined dynamics of the NSW Police and the NSW Courts – the judgment / outcome delivered does not uphold the Truth, even when there are laws specific to the issue. Hence even if the charges are dropped, the above experience is invaluable to Australian society in terms of reality and Truth about ourselves.

As per the above report:

[Nizamdeen’s bail conditions prohibit him from leaving the country or contacting UNSW staff or prosecution witnesses. He will stay with an uncle in the well-to-do suburb of St Ives in northern Sydney and report regularly to police. Mr. Kheir has successfully represented individuals arrested on suspicion of terrorism. One, Khaled Merhi, was freed after eight days under arrest in 2017 when police found he had no connection with an IS-directed plot to blow up an Etihad Airways flight with a bomb concealed in a meat grinder. The trial of two other men charged with involvement in that alleged plot is in process.]

The ABC reported as follows, in relation to the above two:

Similarly, there may be others involved in the UNSW matter which knowledge may surface during the Court proceedings. Those who are so arrested and cleared have the responsibility to ‘balance the books’ by filing charges against the authorities concerned. I did – against the University of NSW as well as the NSW Police. I had to submit a Bank Guarantee for Costs before the Federal Magistrates Court would let the matter go to trial!  That bond is still not released. This means that I effectively paid $10,000 to be heard in Court. I was offered $10,000 to settle out of court – but I declined. The reason was that the Truth should not be suppressed. The more I felt the pain, the less I would trust the offenders and their masters.

As per the reports, Mr Nizamdeen had  thanked the ‘Sri Lankan High Commissioner, Mr Somasundaram Skandakumar, and consular staff for their efforts on his behalf and expressed gratitude to everyone, including Christian and Buddhist clergy, who had supported him by taking part in vigils and demonstrations and in scores of encouraging social media posts’.

My question to Mr Skandakumar is if a Tamil student in Sri Lanka’s capital Colombo, had been arrested with similar material and indicators of links to the LTTE – planning to bomb Colombo as the Sri Lankan President recently claimed in Geneva, would he have used his high status in Sri Lanka – to express support to the Tamil student – by taking part in vigils and demonstrations and through social media posts? During his first talk to the Sri Lanka Reconciliation Forum, Sydney, Mr Somasundaram Skandakumar expressed that he was anti-LTTE and shared his painful experience during the bombing of the Central Bank by the LTTE. Is it part of his duty to express/show  support to Mr. Nizamdeen who is NOT a government official?

Is this show of support to Mr Nizamdeen due to his status as the relative of Minister – the Hon  Faiszer Musthapha?

highlights this unjust disparity  as follows:

[A group of around 43 LTTE detainees commenced a hunger strike at the Colombo Magazine Prison yesterday, according to the Prison Commissioner.

These detainees are said to have commenced the strike demanding that their cases be expedited.

A number of Tamil political prisoners are still in prison for years under the Prevention of Terrorism Act (PTA), without charges being filed against them.]

Mr Skandakumar had the duty to be an observer and no more while in uniform. As a citizen – it is difficult for me to appreciate that – Mr Skandakumar a Tamil,  felt more for Nizamdeen than for Tamils in similar plight. The Energies of  Tamils who genuinely seek Equal Opportunity for minorities in Sri Lanka, would go against Mr Skandakumar and indeed – the Mustapha clan.