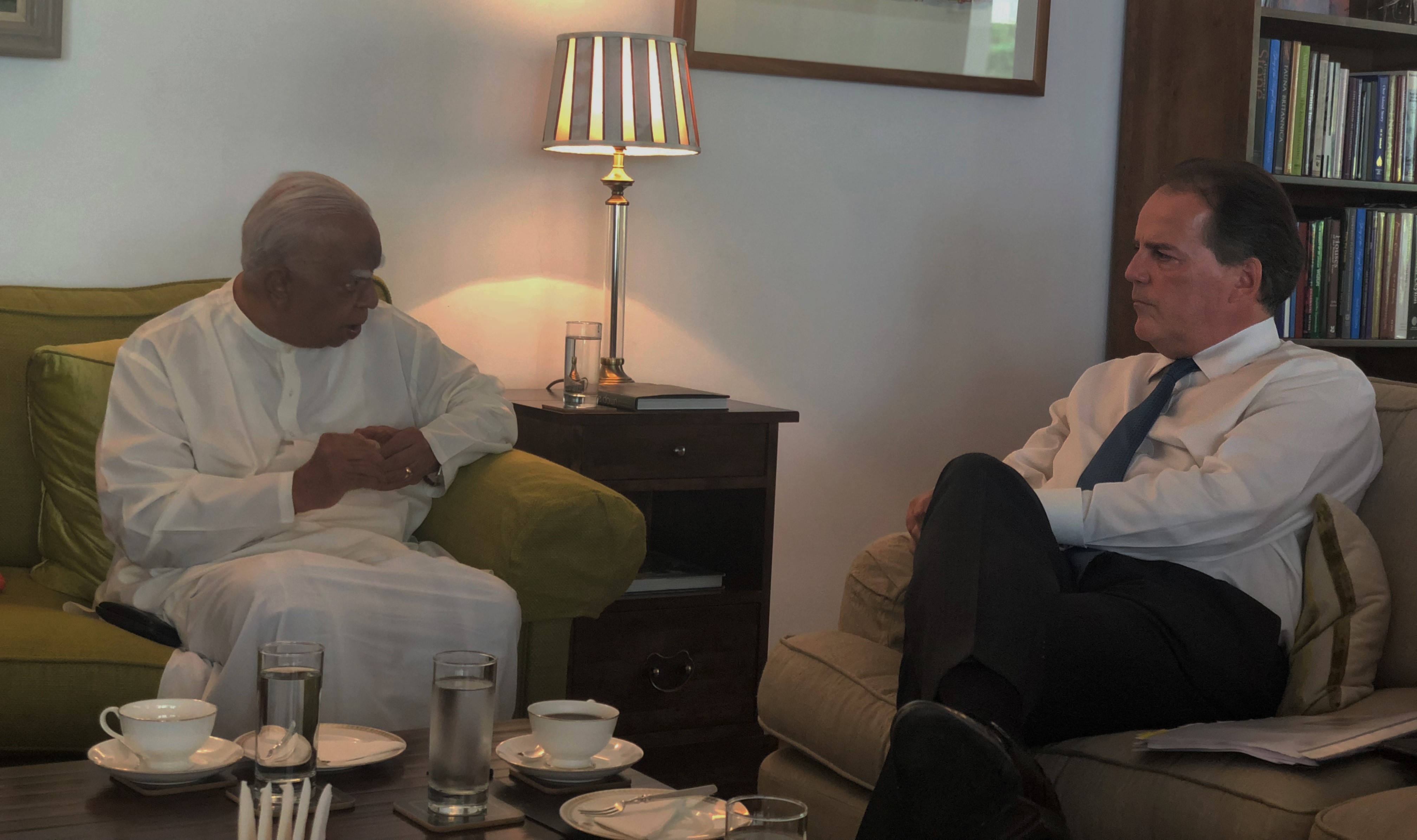 A meeting between The Leader of the Opposition and the Tamil National Alliance R Sampanthan and the Minister of State for Asia and the Pacific Rt. Hon Mark Field took place today at the Westminster House in Colombo.

Voicing his concern Mr Sampanthan pointed out that the conduct of this government was undoubtedly different to the conduct of the former government, but that alone is not enough. Citing consecutive UN Human Rights Council Resolutions Mr Sampanthan pointed out that that the government requested two-year time to implement the resolution, but the process of implementation has been very slow said Mr Sampanthan. Furthermore, he expressed his concerns over undue delays in matters which could have been done without many efforts. Delays in releasing of land owned and cultivated by civilians for centuries which are now occupied by the armed forces even after 9 years since the war came to an end, the issue of the political prisoners who are being held under a draconian PTA law, a law that the Government gave several undertakings to repeal but which is still in existence, the Office of the Missing Persons came to be in place after a long delay they are endeavouring to be effective, these are matters which could have been addressed without long delays said Mr Sampanthan. Further, Mr Sampanthan pointed out that the Truth Commission has not been appointed yet, no one can conceal things and the truth must be ascertained that’s our position. The Truth Commission must be in place to ascertain the truth and to bring about justice.

Briefing the Minister on the new Constitutional making process Mr Sampanthan highlighted the fact that the demands of the Tamil people for a genuine power-sharing arrangement must be addressed through a new Constitution and there had been much work done around this matter for the past 20 years. Every successive President and Government have made efforts towards a new Constitution and this must be done without any further delay said Mr Sampanthan. We are wanting a solution within a united undivided and indivisible Sri Lanka and our people have accepted this stand and have repeatedly voted for this mandate at every election said Mr Sampanthan. We want to live in this country as equal citizens with self-respect and dignity and the people must have powers to decide over their day to day matters and that is a democratic verdict of the people and it must be respected and upheld said Mr Sampanthan. Furthermore, we don’t want our young people to return to violence, our youth have been deprived of many things due to the armed conflict and we don’t want that to be continued said Mr Sampanthan.

TNA Spokesman and Jaffna District Parliamentarian M.A. Sumanthiran expressed his concern over the lack of political will from the leaders in taking this process forward and explaining it to the people. We have managed to reach consensus on many matters said Mr Sumanthiran yet there seems to be reluctance from the leaders of other political parties taking this forward he added.

Mr Sampanthan also cautioned that if this opportunity is missed that the country will certainly go backwards, regardless of who is in power. Therefore, all parties must come together to address this longstanding issue to find a permanent solution, and any failure on the making of a new Constitution will lead this country once again towards violence said Mr Sampanthan.

Highlighting the role played by Great Britain in the past Mr Sampanthan urged closer constructive engagement of the International community which is inevitable to seek a positive end to the efforts that have commenced including the New Constitutional making processes.
The State Minister assured that the continuous support of the British Government to Sri Lanka to find a lasting peace and reconciliation among communities will continue, and the British government will take all necessary steps

The one hour long meeting was attended by TNA Spokesman and the Jaffna District Parliamentarian M.A. Sumanthiran and British High Commissioner to Sri Lanka and the Maldives His Excellency James Dauris and other High Commission political section officials.