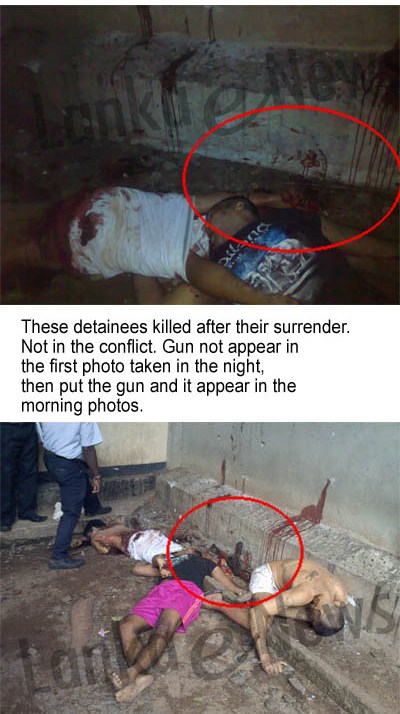 Lanka e News- Were Welikade prisoners abducted during the clash ? 100 missing and Registers lost:
After the mass murders that were committed at the Welikade prison on 9th November following a sudden raid that was conducted pursuant to the illegal orders issued by Gotabaya , some of the suspects detained in the prison pending murder trials have been abducted. 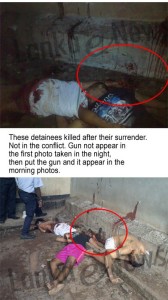 These detainees had been loaded into a Buffel vehicle that arrived in the night at about 9.00 by those who know them well. After showing a list of names not known , to the Jailors , prisoners within were searched and murdered ruthlessly. The suspects aforementioned however have been taken away by two individuals who knew them well , who had pointed out to the suspects and called them ‘you come’, one by one.

Before these suspects were loaded into the Buffel vehicle, all of them had been covered from head to foot and taken so that nobody would identify them . Since the cloths had been brought by the Gota’s murderous team to cover them it was clear that this was a premeditated operation.

In order to confuse everyone on the number of suspects taken away and their identification , a strategy had been adopted , that is removing the three reports registering their names in the prison. Though the story that is circulated is , these reports were destroyed during the clashes , that is false.

Because the reports are not there , it is believed there are approximately 100 of them which includes those abducted , murdered in cold blood and escaped . On the 10th , that is the day following the attack within the prison , with army security several bodies had been burned at dead of night at the Kanatte crematorium, Colombo. Though there had been a complaint received by the Borella police by phone in this connection , nothing had been recorded.

If the abductees were to be murdered , that could have been done easily at the same place where the others were killed , instead a selected few being taken away from that place without killing has triggered speculations and grave suspicions. That is , these murder suspects were taken to a different venue to keep them there and arrange the killing of those whom they desire .Later , after using these murder suspects to kill , to implicate them in the murders and completely camouflage the murder scene cleverly in such a way that there would be no witnesses to the murders so that those who plotted these crimes can wash their hands of them absolutely.

In the recent attempted murder of Lawyer Wanninayake , it is suspected that it is these individuals who were deployed . These suspicions had been heightened because , when the IGP was trying to hand over this investigation to the CID , the DIG Anura Senanayake had intercepted and given it over to the Boralesgamuwa police.

It is significant to note that in regard to the recent Welikade prison genocide allegedly engineered by Gotabaya the devil incarnate whose name is now synonymous with murder and cruelty to the citizens of his own country , so far no investigation had been launched. What is even more irksome and surprising is , the opposition remaining dumb and gay instead of sorrowing over this incident as if they have drunk the concoction of hypocritical silence despite the fact that this incident was a flagrant and brazen violation of human rights with humans being killed in cold blood with complete impunity