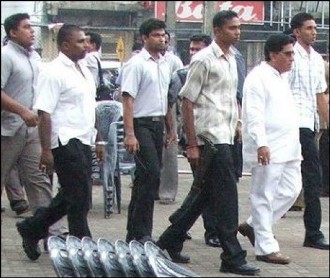 Vishnuguptha
“Crime and bad lives are the measure of a State’s failure, all crime in the end is the crime of the community.” -H.G. WELLS, A Modern Utopia
It was reported that the police had arrested 40 politicians and instituted legal action against them during the past 12 months. According to Police Spokesman SP Ajith Rohana, among them were ministers, deputy ministers, ordinary parliamentarians, provincial councilors and members of local government bodies while charges against them ranged from murder, abduction, assault and rape to land grabbing and child abuse.
The majority of the politicians arrested were from the ruling UPFA. Forty politicians to be among those who had been alleged to have committed criminal activities is an amazing number. That is a tragedy. What is even more tragic is that none, I repeat, none of those politicians have been asked by their respective leaders, in this case, President Rajapaksa and Ranil Wickramasinghe, to be accountable. Therein lies the bigger tragedy. Despite the list of crimes, from child abuse and rape to extortion to manhandling, assault, abduction and land grabbing, these politicians against whom legal action has been instituted, have not been even reprimanded. If this happened in any private sector company, resultant disciplinary action would be natural and immediate. Yet, the so-called leaders of our country seem to be helpless in the face of this menace.

However much the element of accountability has been emphasized and re-emphasized, it still seems to fall on deaf ears. No family, leave alone a country, can progress without a properly-instituted system of discipline and accountability. In a family, if the father is abusive and the mother is willy nilly condoning such abusive demeanor from the father, the adverse effects of  such lowly and intolerable behavior would impact on the children and manifest in so many negative behavioral patterns, if not immediately  then in the long run. But the long-term effects of such behavior could be disastrous, ending perhaps in murder or grievous harm to human life.

We are all too familiar with this phenomenon called the “herd mentality”. You lead, we follow. If the leader is taking an arduous journey in an exemplary disciplined fashion, then the followers would be well advised to follow. But on the other hand, if the leader himself is engaging in criminal activities and paying no attention whatsoever to elementary laws of the land and moral behavior, then the consequences can be very gruesome and unstoppable. For, the train of actions and reactions that such behavior at the top sets in motion would begin a decaying process, which might not materialize in the very short term, but its march towards reaching a point of no return would be inevitable.

No country can escape from its own geography

We are not expecting nor are we proposing the narrow-minded solution of legislating morals and ethics of a society. Society has to change with the times. As Napoleon said “no country can escape from its own geography” and thus no society too seems able to escape from its misdeeds and neglect. People, especially in a democracy, expect their leaders to be above them, specially in accountability and transparency. And in the routine conduct of mundane affairs, people hope and expect that their leaders would be an example to follow; role models to emulate. The recent upsurge in crimes and breakdowns of law and order indicates that the “following and emulating the leadership” has well taken place, but towards self-destructive ends. No civilization would be extinguished in a matter of a few years. The process might consume a number of decades or even centuries; but the interim period, either decades or centuries, during which this process would take its unrelenting course, would be packed with some unspeakable human behavior reminding us of the gruesome episodes in the periods of  Caligula and Nero. Those dark episodes of human history, must serve as lessons.

Sri Lanka is not yet there, but if not checkmated now, today, it would be quite a monumental task for leaders of the future generation to undertake considering the decay this very process is bound to set in place. Right throughout our post-independence history the incidents that many a politician

Bharatha Lakshman Premachandra’s daughter Hiruneka (R) and late wife (L) pay their respects at his funeral ceremony in the Colombo suburb of Kolonnawa on October 12, 2011. He was shot dead along with two of his bodyguards and another person shortly before voting ended at a key local council election on October 8. AFP

has fallen victim to are aplenty and are of his or her own making. In the last five years the rate at which politicos have got involved in most unsavory episodes when they run foul of the law, has increased alarmingly. What was once considered as an aberration has now become the norm.

The shameless behavior of a notorious government politician who really acts like a petty-thug in the garb of an MP’s attire, launched this despicable process way back in 2008. On December 27 of that year, the state-owned Rupavahini news room was stormed by Minister Mervyn Silva and his ‘bodyguards’— one of whom was later identified as a man released on bail for two murders. The News Director, T.M.D. Chandrasekera was assaulted, the reason for this being attributed to the non-broadcast by the TV station, of a speech of Minister Silva at a public meeting. However, this politico cum megalomaniac was held hostage by the workers, amongst whom were journalists of the State Corporation. Ultimately he was released by his captors under the most humiliating circumstances, exposing this megalomaniac’s cowardly persona and his obscene stature. Neither President Rajapaksa nor the Speaker of the House of Parliament, called for any explanations from Minister Silva for this bizarre behavior. However, the rumors in the grapevine were that those who were responsible for throwing colored water etc. at Mervyn Silva while he was detained at the Rupavahini were identified and severely dealt with in accordance with the unwritten laws of the underworld. Such acts of weak leadership, cascading directly from the top, only cements a case for gross disregard for law and order flowing down to the different layers of society and finally settling at the bottom and further  adding stimulus to the unruly and uncouth.

Ever since this ungodly episode of utter disgust, the objective conditions of the country, especially in the context of political interference in the maintenance of law and order and with the intervening presidential and general elections, have taken a spiraling downward trend  beyond repair. The latest is what happened last Friday- an attack on a doctor at the Kandy General Hospital. The Central Province Health Minister Sunil Kithsiri Amaratunge was arrested and produced before court over the incident.

Accountability should be the mantra for all

The laundry list is endless; Mervyn Silva, Athauda Seneviratne, Rishard Badurdeen-all Ministers-and the rest, Provincial Councilors, members of other local bodies only follow like those enslaved. To this combine of sleazy merchants of power, corruption and deceit was added a UNP Southern Provincial Councilor, Krishantha Pushpakumara and Amila Nuwan, member of Bope-Poddala Pradesheeya Saba. They were arrested on charges of obstructing the police. Not even a whisper from the UNP leader. The disease has spread not only among the government ranks, it seems to be eating into the very fabric of the Opposition too. Accountability should be the mantra for all those who wish to involve themselves in politics.

Darker side of economic revolution

The Bharatha Lakshman murder and the conniving plot that was engineered to  slip the main suspect of the murder out of the country added a very sad dimension to this endemic disease. While the daughter of the slain politician is going from courthouse to press briefings to seminars asking that justice be done, the culprits seem to be oblivious to the human suffering this murder has caused the family. Little girls are being molested and raped by grown-up adults, visiting tourists are manhandled and murdered but the irony is that our society is readily embracing all and sometimes only the dark aspects of the economic revolution that began with the introduction of the free-market economy.

The one branch of society that seems insulated at least to some extent so far, is the Judiciary

Not only politicians but bureaucrats from top to bottom, the private sector big-wigs as well as small-timers, school children and teachers, all in their frenzy to get ahead of their competition are increasingly indulging in the muddy enterprise of fast-buck-earning. When the leaders look the other side, the rest takes it as approval for their squalid barters. The one branch of society that seems insulated at least to some extent so far, is the Judiciary. If and when the disease attacks that branch of governance, the decay will start in earnest.

Looking for a leader

Yet, there is hope. People look for leaders who are strong in character and though they would not be searching for a utopian goal, they will certainly be happy with a mundane figure who commands respect and loyalty, a personality of a man who has enough history to count on and an immeasurable future to look forward to and above all else, a decent and normal present lifestyle. We do not see such a person among the present- day established political set up. But we may find him or her on the fringes; lurking for the opportune time to present his or her case. Tried and tested in a battlefield much more fierce and bloody than the underworld-controlled governance, displaying the great quality of endurance in the face of utterly unfair punishments, people rise to occasions when they are summoned to climb great heights. We may have him or her among us, but he or she has not emerged yet. Timing is everything. Are we to wait or are we to accelerate the process so that the emergence of such a leader is made sooner than later.
LS