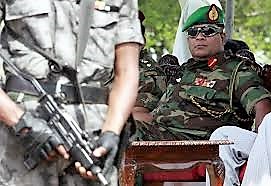 Alleged War Criminal’s appointment as Chief of Staff to Sri Lankan Army confirms lack of political will to address accountability and justice.

(Jaffna/Washington, 14 January 2019) The undersigned organisations strongly condemn the Sri Lankan Government’s decision to appoint Major General Shavendra Silva, an alleged war criminal, as the new Chief of Staff of the Sri Lankan Army. Brigadier Silva as he then was, led the Sri Lankan Army’s 58 Division during the last phase of the armed conflict. He and his unit were named in multiple UN and NGO reports as among the top brass in the Sri Lankan Army to have perpetrated horrific international crimes and mass atrocities against Tamil civilians and combatants. These violations of the laws of war included attacks on known hospitals, systematic torture and sexual violence, summary executions of surrendees, and hundreds of enforced disappearances.

Silva’s appointment is indicative of a deep-rooted lack of political will on the part of the Sri Lankan government to pursue accountability and justice. Sri Lanka has rejected all calls for accountability since the end of the armed conflict in 2009. Although the so-called “unity-government” elected four years ago pledged to embark on a path to national cohesion, including by addressing impunity for alleged war crimes and crimes against humanity, at the highest levels, the President, Prime Minister and senior ministers consistently vow to protect the security forces from any scrutiny. Furthermore, the current regime has continued former President Mahinda Rajapaksa’s strategy of appointing military officials implicated in international crimes to senior positions within the security establishment or diplomatic positions. The appointment of Silva is a continuation of such practice and a clear example of the Sri Lankan government’s absolute failure to initiate meaningful security sector reform and accountability, the two issues about which the Tamil community have been the most concerned about in the post-war context.

Meanwhile, over the last four years, the international community has prematurely rewarded Sri Lanka for superficial actions and broken promises. Such rewards have included the EU’s granting of GSP+ trade concessions and increased military and police cooperation by the United States, United Kingdom, Australia, India and other allies. This has emboldened Sri Lanka to continue to flout its commitments, and undermine pledges under the UNHRC Resolution 30/1, which included security sector reform and accountability.

People for Equality and Relief in Lanka (Washington)