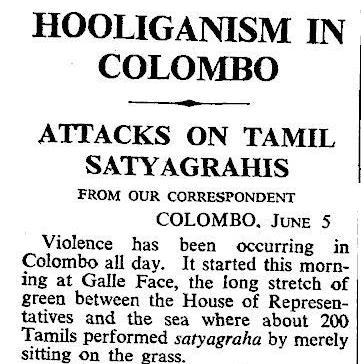 A Tamil National Alliance meeting with 5 TNA MP’s present was attacked by a group of Sri Lankan army men at Alaveddy in Jaffna on june 16th. 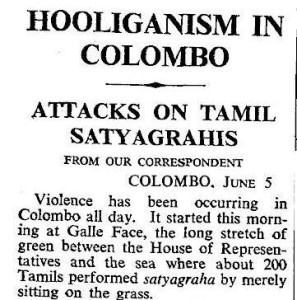 While some chased away the people others climbed the stage. The mike was snatched from Jaffna MP Saravanabavan who was speaking at the time.
When the army thugs tried to assault Saravanabavan his bodyguards intervened & blocked it.Then the army attacked the bodyguards of TNA MP’s.
The TNA has condemned the incident & stated that the party will take up the issue with higher authorities in the Govt & defence establishment.
Meanwhile Northern Army commander Maj-Gen Hathurusinghe has denied the incident & refuted TNA charges, according to some media reports.
If not for the brave resistance put up by bodyguards in defence of MP’s the TNA leaders could have been viciously assaulted by the army mob.
Police bodyguards of Jaffna district MP’s Saravanabavan, Suresh Premachandran&Sritharan had serious injuries while others had minor injuries.
Many of the injured persons received first – aid&medical treatment at the Thellippazhai hospital.Patients refused to be warded due to fear.
The 5 TNA MP’s led by Senathirajah lodged a complaint at the Thellippazhai Police station. A police party went to Alaveddy & made “inquiries”.
Several vehicles parked at the venue were also smashed by the army mob.TNA MP vehicles were damaged.Premachandran MP’s vehicle was abandoned.
TNA sources say the Alaveddy meeting was not a public meeting. It was only for candidates & party members. Therefore “Permission” was not required.
The TNA meeting at Saiva Maha Sabhai hall in Alaveddy was not an election propaganda public meeting. So permission was unnecessary says TNA.
The Army mob which attacked had fire-arms also. But they were not used. Instead wooden poles & steel rods were used. An Army “Major” led the mob.
Maj- Gen Janaka Walgama GOC 51 Division & Director General of Defence Intelligence met the TNA MP’s at Thellippazhai & tendered an apology.
This is a bundle of tweets  posted on twitter by D.B.S. Jeyaraj