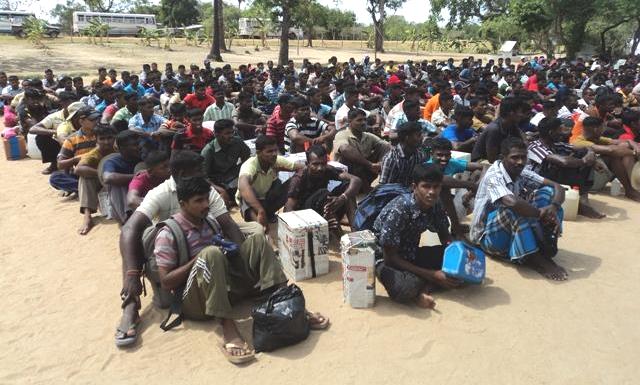 Northern Province Chief Minister C.V.Wigneswaran had made a request for it in a conversation with US Ambassador Atul Keshap in Jaffna.

Colombo, August 17 (NIA): The Chief Minister of Sri Lanka’s Tamil-majority Northern Province, C.V.Wigneswaran, has said that US Air Force’s medical team, currently in the province on a goodwill visit, will examine former Tamil Tigers combatants who had fallen sick allegedly because they were injected with poisonous substances by the Sri Lankan armed forces when they were undergoing detention or rehabilitation after surrender.

In the past few weeks, Tamil politicians and the media have been highlighting the death of 104 ex-combatants who had allegedly been given injections as part of an “inoculation program”. Some others had complained of physical debility after release from detention or rehabilitation.

Chief Minister Wigneswaran told the NPC on Tuesday that he had mentioned the plight of the former combatants in his conversation with the US Ambassador, Atul Keshap, when the latter was in Jaffna to inaugurate a five-day program of the USAF’s Operation Angel medical team there, and asked if the USAF team could examine them and give an independent report. The US envoy said that the USAF could examine select patients and decide what to do next. Therefore, a few of the cases will be referred to the US team, the Chief minister said.

According to the Chairman of the NPC, CVK.Sivagnanam, the USAF might even send the preliminary diagnosis to the US for further action. The US team would be in Jaffna only for five days.

The issue of the sick and dead ex-combatants was raised by NPC member M.K.Sivajilingam and the Chief Minister had responded to him.

Earlier, an NPC member from Mullaitivu district, T.Ravikaran, had charged that 104 ex-combatants had died of poisoning by the Sri Lankan armed forces while they were in custody or undergoing rehabilitation. He quoted an ex-LTTE cadre who told a Sri Lankan government committee on reconciliation recently, that he had been considerably weakened physically by these injections which were said to be “inoculations” against communicable diseases.
Northern Province Chief Minister C.V.Wigneswaran emerging from an USAF flying hospital at the Palaly airbase in Jaffna

“When I was in the militant movement I could carry two cement bags at a time, but now can’t even lift 10 kg” the cadre had said.

Provincial Heath Minister Dr.P.Sathiyalingam offered to get the cadres screened. So did the Sri Lankan Health Minister Rajitha Senaratne, even as the Sri Lankan army spokesman, Brig.Jayanath Jayaweera, described the charge as completely false.

The NPC then unanimously passed a resolution expressing concern about the ex-combatants and sought medical screening of all former cadres.

Ravi Karan, Sivajilingam and former MP Suresh Premachandran said that a credible examination could be conducted only by non-Sri Lankan doctors.

Since the USAF’s Operation Angle medical team was in Jaffna for a five day program, Chief Minister Wigneswaran requested the US envoy to get the team’s men to examine the sick cadres and he readily agreed.

However, the ruling party in the Northern Province, the Tamil National Alliance (TNA), is not united on this issue. Fisheries Minister B.Deniswaran said on Tuesday that is it wrong to allege that ex-combatants had died or are sick because of deliberate poisoning, even before doing a survey. The TNA’s spokesman M.A.Sumanthiran said that no comment can be made before ascertaining the facts. “We are trying to ascertain the facts.”
newsin.asia