US: Patience with Sri Lanka could ‘wear thin’ 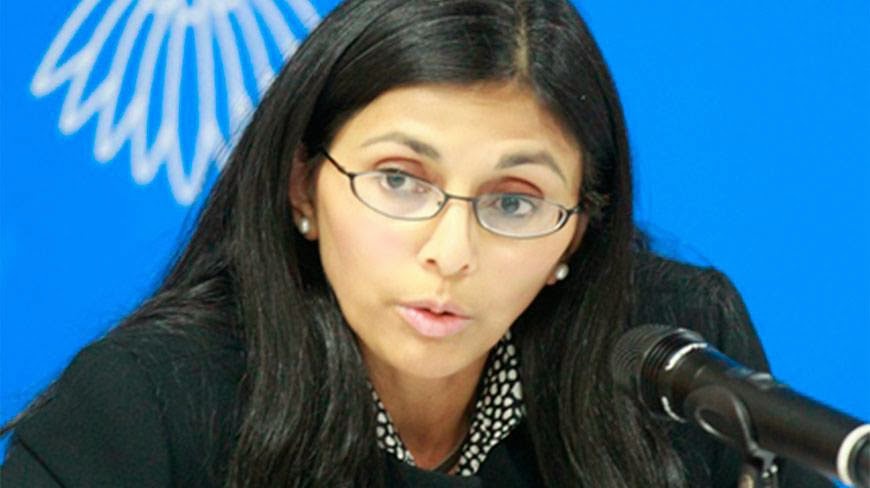 MATTHEW PENNINGTON
WASHINGTON (AP) — International patience could wear thin with Sri Lanka unless it takes action to address allegations of atrocities during the island nation’s civil war, the top U.S. diplomat for South Asia said Tuesday. Assistant Secretary of State Nisha Biswal stopped short of endorsing a deadline set last month by British Prime Minister David Cameron, who said he would call for a U.N.-backed inquiry into allegations of war crimes unless there was progress on postwar reconciliation by March.

A U.N. report has suggested Sri Lanka’s military may have killed up to 40,000 civilians in the final months of the war in 2009 as it crushed ethnic Tamil rebels, who are also accused of atrocities.

Biswal urged Sri Lanka to take concrete steps on its own, particularly on issues of accountability.

“We would like to see Sri Lanka address these issues through its own processes, and we hope that can in fact be the case,” Biswal told reporters, adding that recommendations of a Sri Lankan-government appointed reconciliation commission pointed the way forward.

She said without real progress the patience of the international community “will start to wear thin.”

The government of President Mahinda Rajapaksa has so far ignored calls for a thorough local inquiry into war abuses and says it will not allow any international probe. He denies allegations of abuses by the army.

Since the Tamil Tigers’ 27-year battle for an ethnic homeland ended, Rajapaksa’s grip on power has tightened. Recent reports of media harassment and rights abuses have also raised alarms, although a convincing victory for the main ethnic Tamil party in provincial elections in northern Sri Lanka in September were seen as a small step toward devolution of power.

Biswal, portfolio covers South and Central Asia, also voiced concern Friday about political violence in Bangladesh, where street clashes between rival factions have killed about 40 people and wounded hundreds in the past month.

The opposition is resisting government plans to hold a general election on Jan. 5 unless Prime Minister Sheikh Hasina allows a neutral caretaker administration to oversee the polls.

Biswal, who recently visited Bangladesh, called for the major political parties to come together and work out a compromise “that will allow for elections to take place that the people of Bangladesh have confidence in and feel are credible.”

She said failure to achieve a peaceful political transition poses the greatest obstacle to Bangladesh continuing its progress of the past decade in areas such as reducing child and maternal mortality and improving food security.