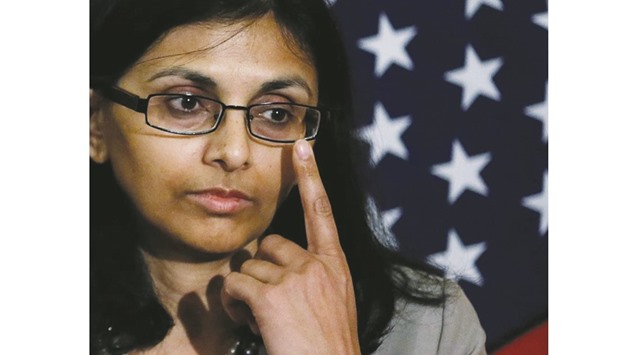 (US assistant secretary of state for South and Central Asian Affairs Nisha Biswal gesturing after the meeting with Sri Lanka’s Minister of Foreign Affairs Mang.ala Samaraweera in Colombo.)

Reuters/Colombo.
The United States has praised Sri Lanka’s steps taken under a UN resolution to address alleged human rights abuses in the final phase of a 26-year war with Tamil Tiger rebels, and said it would do what it could to see through the process.

Washington along with other Western nations had long demanded an international investigation into the alleged killing of thousands of ethnic minority Tamils in the final weeks of the war, in 2009, under then Sri Lankan leader Mahinda Rajapakse.
Two senior US State Department officials visiting Colombo welcomed its steps in implementing the UN resolution adopted in September last year calling in part for an inquiry into missing people and progress in post-war reconciliation.

“We strongly commend the government for working closely with the United Nations and the High Commissioner (for Human Rights) Zeid (Ra’ad Al Hussein),” Assistant Secretary of State Tom Malinowski told reporters in Colombo.

“The United States co-sponsored the resolution. As such we feel we have a shared responsibility to help see that process through.”
The visit of Malinowski, along with Assistant Secretary of State for South and Central Asian Affairs Nisha Biswal, came two weeks after the United Nations urged Sri Lanka to rein in its military forces, prosecute war crimes and win the confidence of the Tamil minority.

Former president Rajapakse rejected international intervention in addressing human rights abuses and denied visas for top UN officials who wanted to assess conditions in the South Asian country after the war
ended in May 2009.

President Maithripala Sirisena, who unseated Rajapakse in January last year, promised to implement the UN resolution. However, he and Prime Minister Ranil Wickremesinghe rejected the resolution in one respect by saying foreign judges could not be admitted into the country in keeping with its constitution.

UN Secretary General Ban Ki-moon said on a visit last year that Colombo would not be compelled to accept a role for international judges in investigating possible war crimes, but any process must be impartial and independent.