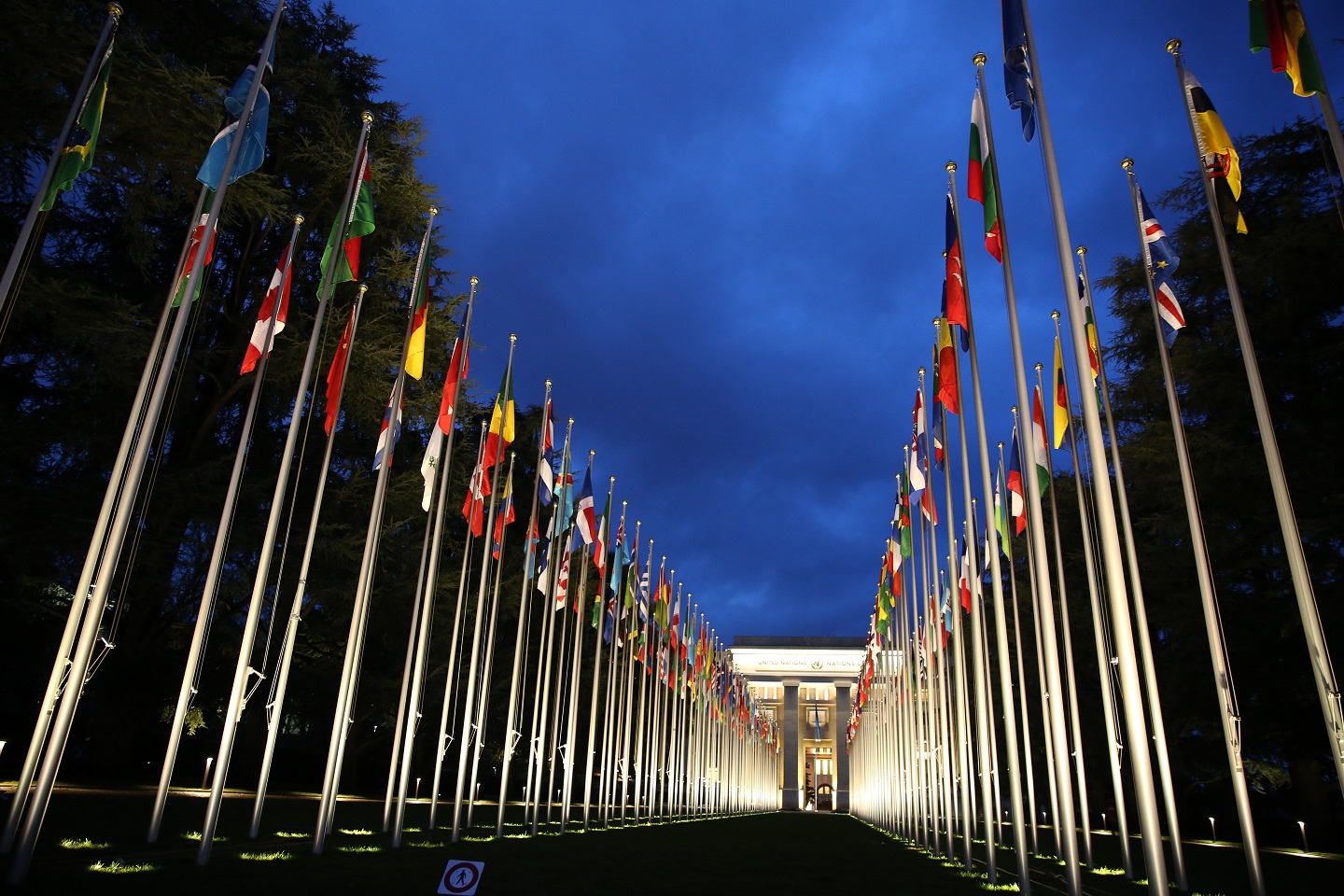 Sri Lanka will come under Universal Periodic Review  of the UN Human Rights Council on  15th of November at Palais des nations, in Geneva.

‘The Universal Periodic Review (UPR) is a unique process which involves a review of the human rights records of all UN Member States. The UPR is a State-driven process, under the auspices of the Human Rights Council, which provides the opportunity for each State to declare what actions they have taken to improve the human rights situations in their countries and to fulfil their human rights obligations. As one of the main features of the Council, the UPR is designed to ensure equal treatment for every country when their human rights  situations are assessed.’ (- OHCHR)

Member states of the UN will pose questions and concerns on the human rights situation of Sri Lanka on 15th November (2.30 pm – 6.00 pm) for the consideration of the government of Sri Lanka . Sri Lanka government responses will be presented on  17th November (5.00 pm to 6.00 pm) and after the responses the reported will be adopted.

The questions advanced  some of the countries are given below:

BRAZIL
• How does your country envisage to promote synergies in implementing the UPR recommendations and the Sustainable Development Goals, under the 2030 Agenda?

• What measures has the country undertaken to protect and promote the rights of the LGBTI community and decriminalize consensual same sex relations between adults?

SLOVENIA
• Slovenia notes that the multisectoral and comprehensive national action plan to end sexual and gender-based violence is being prepared. Could you please elaborate in more detail on the course of the national consultations process and measures being considered to improve the investigation and prosecution aspects of sexual and gender based violence, including domestic violence?

SWEDEN
• What measures are being taken by the Government of Sri Lanka to operationalize and ensure the independence of the Office of Missing Persons, providing it with sufficient funding and resources to fulfil its mandate to investigate all allegations of disappearance?

• Since it is the Government’s responsibility to ensure the safety of all people within its borders, how does the Government of Sri Lanka see that the ongoing constitutional reform process also can include expanding the non-discrimination clause under Article 12(2) of the Constitution, to explicitly prohibit discrimination on the grounds of race, religion, language, caste, sex, political opinion?

• What measures are being taken by the Government to denounce incitement to hatred and violence and publicly clarifying that it is a criminal act?

• What measures have been taken by the Government of Sri Lanka to criminalize all forms of violence against women and why is marital rape not recognized as a criminal act?

URUGUAY
• Uruguay will appreciate receiving information on the work done in order to eliminate the causes of minor’s recruitment by armed groups and guarantee full rehabilitation, social reintegration and school reintegration of those children who participated or were affected by the conflict, including those who had to be accommodated in internal displaced camps and to take into account the linguistic, cultural, and religious diversity in Sri Lanka (recommendation 127.73 supported by the country under review).

BELGIUM
• Belgium welcomes Sri Lanka’s ratification on the 25th of May 2016 of the International Convention for the Protection of All Persons from Enforced Disappearance. Belgium wishes to know which concrete measures have been taken by the Government of Sri Lanka to guarantee that victims, including relatives of the enforced disappeared, are provided with full and effective reparation and that those responsible for enforced disappearances are brought to justice?

• Belgium welcomes Sri Lanka’s efforts regarding transitional justice. What progress has been made regarding the establishment of a truth and reconciliation Commission?

• Does the Prevention of domestic violence Act provide the possibility to prosecute a person specifically for marital rape? If not, does Sri Lanka consider to criminalize marital rape in the near future?
• Which measures does the Government of Sri Lanka take to prevent and counter religious hate speech in the country?

ESTONIA
• What is being done and what progress has been achieved with regard to investigations of alleged war crimes? Have any international organisations or experts been included in these investigations?

• In the national report you mention that a certain mechanism has been created to ensure that the commitments under UN HRC Resolution 30/1 are met. Could you elaborate on the work so far done by that mechanism?

• What is the current state of play with regard to the review and repeal of the Prevention of Terrorism Act in ensuring that it meets international human rights standards?

GERMANY
• In September 2017, the parliament of Sri Lanka has taken the bill on enforced disappearances from its agenda. Why was this the case and when does the parliament plan to reconsider the bill?

• Has there been any progress or are there any plans to establish a publicly accessible central register for all persons missing or in custody as previously recommended?

• Poverty levels are still high, especially in the North, East and Uva Provinces. What concrete measures has the government taken to improve the living conditions of the poor and to bring them into work?

• What steps has the government taken to make the CRPD ratified in 2016 operational, in particular its Article 33? Does it intend to ratify its Optional Protocol?

• Does the Government of Sri Lanka plan to include the rights of LGBTIQ persons and address sexual and gender-based violence in the final version of the National Human Rights Action Plan (2017-2022)? If not, for what reason?

NORWAY
• Norway is concerned about the use of torture by security and law enforcement agencies, as well as by impunity and the lack of an appropriate legal framework to address this, as raised by the UN Special Rapporteur on the promotion and protection of human rights and fundamental freedoms while countering terrorism (July 2017). In HRC resolution 30/1, Sri Lanka committed to repeal the Prevention of Terrorism Act (PTA) and to replace it with anti-terrorism legislation in accordance with international best practices. Progress on this is noted in the National Report (point 56). When will the Prevention of Torture Act be repealed and replaced by legislation that is fully compliant with human rights standards?

• Norway is concerned about the existence of legislation that contradicts principles of equality and non-discrimination. The National Report shows that Sri Lanka is considering reform of articles in the Constitution (16(1) and 80(3)) that allow for this. The National Report also says (point 33) that “The final report of the parliamentary Sub-Committee on Fundamental Rights, recommended that the Fundamental Rights Chapter in the Sri Lankan Constitution include express guarantees of non-discrimination on the grounds of disability, gender identity and sexual orientation.” Which steps will Sri Lanka take to follow up the report of the parliamentary Sub-Committee on Fundamental Rights with respect to non-discrimination?

• When does the Government of Sri Lanka expect to have transitional justice mechanisms in place, to ensure accountability and give greater certainty of non-recurrence, as set out in the UNHRC Resolution 34/1?

• What steps is the government taking to ensure that detainees held under the Prevention of Terrorism Act are either charged, tried or released without further delay and what is the related timescale?

• What further steps will the Government of Sri Lanka take to eliminate child labour as defined by Article 3 of ILO Convention No.182?

• What steps is the Government taking to ensure equality of access to the democratic process and justice systems for all communities across Sri Lanka?

• What plans does the Government of Sri Lanka have to amend Article 16(1) of the constitution and to repeal the Muslim Marriage and Divorce Act to ensure that all laws are not discriminatory?

• We are concerned by reports of continued abuses by some members of the security forces, including alleged incidents of torture, sexual violence and arbitrary arrest. What steps is the government taking to end these abuses and, when will the government repeal the Prevention of Terrorism Act and replace it with anti-terrorism legislation that complies with international law and is less susceptible to serving as a pretext for human rights violations and abuses?

• We are concerned by the continued use of Penal Code Sections 365, 365A, 399, and the Vagrants Ordinance, which in practice outlaw same-sex relations and are used by law enforcement to harass members of the LGBTI community. What steps is the government taking to address these concerns raised by Canada and Argentina in the previous UPR cycle, and to protect members of the LGBTI community from undue harassment?

• We are concerned by civil society reports that local government officials continue to impose discriminatory restrictions on members of religious minorities, including requiring registration of places of worship although no law or regulation specifically requires it. What steps is the government taking to protect members of religious minority groups from discrimination?

• We note that civil society groups have advocated for reform of the Muslim Marriage and Divorce Act, which permits girls as young as 12 to be married without their consent. What efforts is the government making to amend the law in a manner that protects the human rights if women and girls?

• How is the government using the recommendations in the Consultation Task Force report to guide it through an inclusive reform process?

• We are pleased with continued progress returning military-occupied lands to their owners, but much land remains to be returned. What action is the government taking to ensure land returns continue, to provide internally displaced persons with durable solutions, and to fairly compensate individuals whose land will not be returned?

LIECHTENSTEIN
• What steps has Sri Lanka taken to ratify the Rome Statute in its 2010 version?

• What steps has Sri Lanka taken to join the Code of Conduct regarding Security Council action against genocide, crimes against humanity or war crimes, as elaborated by the Accountability, Coherence and Transparency Group (ACT)?

PORTUGAL
• Has the State-under-review established a dedicated ‘national mechanism for implementation, reporting and follow-up’ (NMIRF) covering UPR recommendations, but also recommendations/observations generated by the UN human rights Treaty Bodies, the Special Procedures and relevant regional mechanisms? If so, could the State-under-review briefly share its experience on creating such mechanism, including challenges faced and lessons learnt, as well as any plans or needs to strengthen the NMIRF in the future?

SWITZERLAND
• What are the reasons for the delay in implementing the resolutions 30/1 and 34/1? What are the milestones and benchmarks foreseen in the further implementation?

• When will the Office on Missing Persons (OMP) become fully operational? What kind of international involvement do you plan in the establishment and running of the OMP?

• Which steps are taken to implement the recommendations as per the Concluding Observations on the Eighth Periodic Review of Sri Lanka by the CEDAW Committee, in particular ensuring judicial review for the Muslim Marriage and Divorce Act, Kandyan Law and Tesawalamai Law?