Unreformed, the Commonwealth deserves to die. Improved, it could be rather useful – The Economist 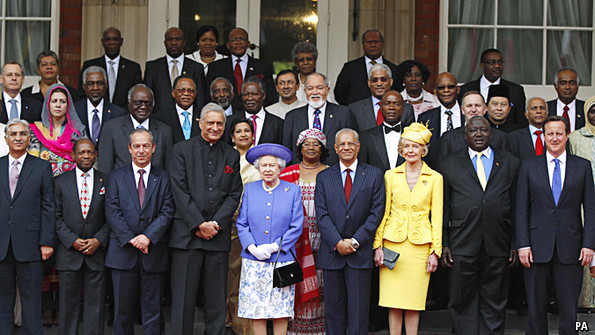 THE biggest achievement of the Commonwealth, its admirers say, is the fact of its unlikely existence. That so many former British colonies and dominions should be content to co-exist in a club which has the queen as its head is remarkable. However this is a low bar to set for the success of an organisation nominally committed to promoting democracy, human rights and the rule of law. Quite how nominally will be evident in Colombo this weekend—at a gathering of Commonwealth leaders hosted by a nasty and abusive regime.

Be in no doubt of that. The most heinous allegation against Mahinda Rajapaksa’s family-based government—a battlefield slaughter of some 40,000 Tamil civilians—is complicated by the exigencies of the appalling civil war it helped end. It took ruthlessness to defeat the Tamil Tigers, and Sri Lanka is better off as a result. Yet the war was also marked by reprisals against journalists, human-rights activists and opposition politicians, and intimidation continues today. Mr Rajapaksa has meanwhile dug in for the long haul—having used his popularity as a war victor to scrap presidential-term limits. This amounts to a textbook transgression of the Commonwealth Charter, which includes a commitment to freedom of expression, the separation of powers and the like, promulgated by the queen in March. The meeting should never have been held in Sri Lanka.

The Commonwealth has too often failed to enforce its values. Nigeria was partially suspended from the club after it hanged Ken Saro-Wiwa in 1995, as was Pakistan after its 1999 coup. But the club’s overall record is timid. With many more coups and killings left unsanctioned, membership is as likely to dignify rights-abusers as to correct them.

What, then, is the point of the Commonwealth? Hardly any of its members’ citizens can say; asked to name its head, a quarter of Jamaicans cited Barack Obama. Officials in the secretariat, housed in a splendid London mansion, toil away. It is an open secret that many Commonwealth leaders attend the biennial shindig mainly for an opportunity to be photographed with the queen. Even that pleasure has been denied them in Colombo: for the first time in 40 years, perhaps because of her age, she is giving it a miss.

Despite these conspicuous frailties, the Commonwealth has a few things going for it. It is cheap, costing only around £16m ($26m) a year. It runs a fine quadrennial games, a respected annual literary prize and a decent scholarship programme. It could also help boost prosperity among a third of the world’s population. Colonial ties, including a common law and language, boost trade; by one estimate, the cost of doing business within the Commonwealth is 20% lower than the cost outside. By reforming its tangled and ineffective bureaucracy, and using it to strengthen these advantages, the club could make more of them. That would make membership more valuable, and expulsion more costly.

Yet bringing reform and toughness to the Commonwealth requires leadership, which it lacks. Britain, Australia and Canada would like to provide this, but cannot. Whenever they seek to improve the club—which they largely pay for—they mainly succeed in uniting its poorer members in resentful opposition to their perceived post-colonial condescension. The decision of Canada’s prime minister, Stephen Harper, to boycott Mr Rajapaksa’s fest has caused the regime little concern. His absence supports Sri Lanka’s claim—with which many of its visitors sympathise—to be a victim of rich-world bullying.

The direction needs to come from the club’s poor but powerful members: South Africa, Nigeria and, above all, India. Manmohan Singh, India’s prime minister, also refused to show up in Colombo—a decision he reached, ridiculously, this week. It looked like politics, not principle. A shrewder India would have insisted earlier that the gathering not be held in Sri Lanka. Together with Nigeria and South Africa, Mr Singh should use the farce in Colombo as a pretext for change. Hold the members to high standards, deepen business ties—and this peculiar organisation could be a serious one.
-The Ecomomists