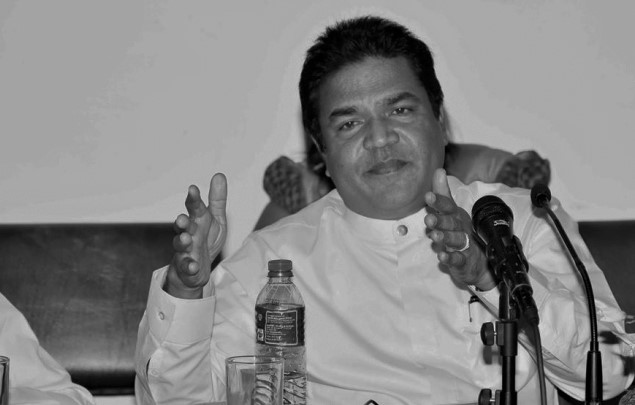 The board of Directors of National Livestock Development Board (NLDB) had taken an unlawful board decision on January 31, 2017 to ‘develop’ the Rural Economic Development Minister P. Harrison personal economy by approving to settle a staggering fuel bill amounting to over one million rupees and a monthly fuel allowance of Rs.175, 000 in contrary to guidelines issued by the Department of Public Enterprises of the Finance Ministry.

Overruling Department of Public Enterprises guidelines on utilisation of enterprise resources, in the absence of three board members, Chairman NLDB, Prof. H.W. Cyril and two other Board Members A. Punchihewa and S. Weerasuriya have taken a board decision to grant covering approval to settle Rs. 1.059 million, the Minister and his staff had spent on fuel for their ‘visits’ to NLDB Farms between February 26, 2016 and January 13, 2017.

In addition, at the same board meeting the Board had decided to allocate a sum of Rs.175, 000 per month for fuel for the subject minister and his staffs’ visits to all NLDB farms in the country. The three board members who were not present at the board meeting in question was Deputy Chairman C.P. Palansuriya, Treasury representative A.G. Nishantha and K.K. Vasanje. Although all these three Directors were not present when this fraudulent decisions were taken, their failure to object even at later board meetings shows they too have given their consent to bypass Finance Ministry guidelines in order to be in good books with the subject minister.

However, questions have been raised as to why the Treasury representative A.G, Nishantha who is well aware of rules and regulations imposed by the Department of Public Enterprises and had been appointed to the Board to see whether financial irregularities are taking place, is silent on this erroneous board decision over the past several months and was trying to whitewash the decision taken when this newspaper questioned him last week.

Minister of Rural Economic Affairs, Anuradhapura District MP, P. Harrison who still criticises the members of the former regime for their involvement in many financial frauds, too has now come to the limelight for misusing public funds to pump fuel for his fleet of vehicles obtained unlawfully from the Ministry pool. According to circular CA/1/17/1 issued on May 14, 2010 by the Presidential Secretariat, every Minister or a Deputy Minister is entitled only for three vehicles for his/her and the security usage. By passing this circular, it is alleged Minister Harrison is using additional vehicles taken from the Rural Economic Ministry vehicle pool and pump fuel on the account of other departments that comes under his ministry.

According to the document evident this newspaper is in possession, a budgetary allocation of Rs.8, 000 million for fuel had been given to Rural Economic Affairs Minister and his personal staff for year 2016 although he had taken yet another Rs.1. 059 million from NLDB.

Highly reliable officials from the NLDB who wished to remain anonymous said that there are other departments that comes under the Rural Economic Development Ministry and said that if the Minister had obtained a ‘special’ fuel allocation from NLDB, he would have obtained more money for fuel from other departments as well.

The Board noted that the NLDB Has supplied fuel for the vehicles used by the Minister of Rural Economic Affairs and his staff for farm visits and the expenditure incurred in that regard from February 26, 2016 up to January 13, 2017 was Rs. 1, 059,275/ 50.

‘The Board whilst granting covering approval for the aforesaid expenditure, resolved to allocate a sum of Rs.175, 000 per month in respect of the expenditure to be incurred on fuel for the vehicles used by the Minister of Rural Economic Affairs and his staff on farm visits’.
This is contrary to Section 8.3.9 of the Department of Public Enterprises guidelines which clearly advices how to utilize enterprise resources. Section 8.3.9 of Department of Public Enterprises guidelines states as thus, ‘Public Enterprises are not permitted to incur expenditure or deploy its resources (including human resources) under any circumstances on behalf of the line Ministry or any other government institution.

By letter dated December 9, 2013, Additional Secretary (Finance and administration), Ministry of Livestock and Rural Community Development H.L. Tissera had instructed the then Chairman NLDB to supply fuel to the vehicles used by the Minster and his convoy during their official visists to Nuwara Eliya and Polonnaruwa. The letter further states as thus, ‘The Hon. Minister is expected to tour Nuwara Eliya on December 9, 2013 and Polonnaruwa on December 10, 2013. As the ministry is not able to supply fuel for the vehicles the Minister and his convoy is travelling, please make arrangements to supply fuel for these vehicles. Send the invoices to me to reimburse the money’.
All attempts taken to contact Tissera for a comment on his involvement in financial frauds during the previous regime and even under the good governance administration failed as there was no response from him.

When contacted Chairman National Livestock Development Board Prof. H.W. Cyril to find out as to why he disobeyed the guidelines of the Department of Public Enterprises, he said that it was the Rural Economic Affairs Minister who wanted him to pay money for the fuel and get it reimbursed from the Ministry and contradicting his own statement said it was the Ministry Secretary that instructed him to pay for Minister and his staff travelling costs for the farms and get it reimbursed.
Comments by Minister Harrision
Minister Harrison when contacted said that there is nothing wrong in allocating funds for his official vehicles as he visits NLDB farms all over the country very often. “Unlike during the previous regime when Minister Arumugam Thondaman had obtained millions of rupees from the NLDB illegally, the present board of directors allocated funds for fuel after getting board approval,” Minister Harrison said.
When asked whether he knows that the Department of Public Enterprises of the Finance Ministry in their guidelines had clearly stated that public enterprise are not permitted to incur expenditure on behalf of the line Ministry, Minister Harrison said that it is the Board of Directors who can take decisions but not any other Department. “No one can decide on what the institutions that comes under any ministry should follow. It becomes legal if the approvals are granted by the Board of Directors,” Harrison added.

Edited version  of a Sunday Leader article by Nirmala Kannangara.