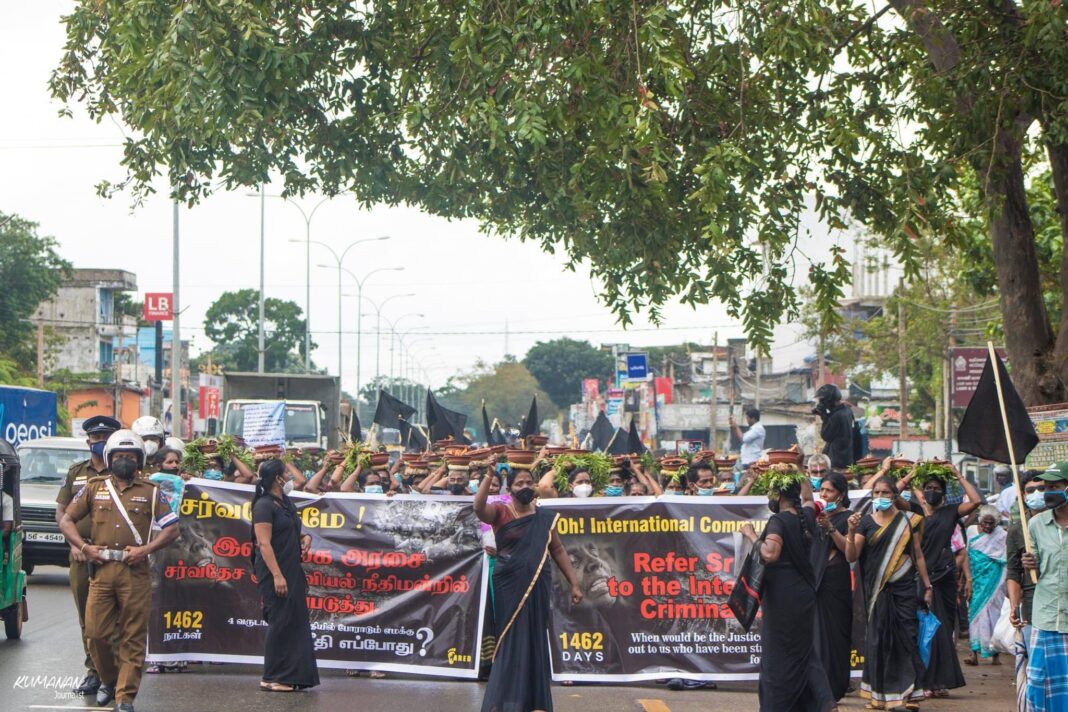 It is more than clear by now that Sri Lanka has failed to – and doesn’t intend to — take the necessary, decisive, and sustainable steps necessary to achieve domestic justice and reconciliation. The government has rejected its responsibility for accountability despite extensive United Nations and international support or the opportunities offered by the landmark 2015 U.N. Human Rights Council (UNHRC) resolution 30/1, which extended the country an opportunity to make good on its promises for justice and offered extensive support to accomplish that objective.

With domestic efforts stalled, international options become even more important. Although U.N. High Commissioner for  Human Rights Michelle Bachelet noted in her report last month the option of referring the Sri Lanka situation to the International Criminal Court, she also called for third States to consider bringing more cases under the principle of universal jurisdiction. Such cases typically are brought not simply because of the third State’s national interest, but because of the gravity of the crimes for the international community as a whole.

But a number of examples related to Sri Lanka in the past decade illustrate how universal jurisdiction proves to be difficult for various reasons. Among the obstacles are insufficient resources for prosecutors and war crimes units in third States to investigate the large number of cases, as well as the well-known difficulties in securing international cooperation in investigations, especially from the territorial State, in this case Sri Lanka. The difficulty of the latter factor is multiplied with Sri Lanka’s new government, headed by one of the most notorious of the suspects, now-President Gotabaya Rajapaksa.

The immunities enjoyed by perpetrators travelling and stationed overseas is another significant obstacle to justice through foreign national courts. Now, with evidence of grave crimes at risk of being lost under Sri Lanka’s current administration, a strong U.N. investigation mechanism for Sri Lanka, along the lines of the institutions dedicated to Syria and Myanmar, is necessary and must be established at the forthcoming UNHRC session to overcome some of these obstacles.

Universal Jurisdiction Cases on Sri Lanka in the Past Decade

In 2011, two years after the end of Sri Lanka’s armed conflict, cases under principles of universal jurisdiction were filed in Germany and Switzerland by my organization, the European Center for Constitutional and Human Rights (ECCHR), and TRIAL International against Jagath Dias, then Sri Lanka’s deputy ambassador to Germany and Switzerland and former military commander of the notorious 57th division of the Sri Lankan army. However, as a diplomat posted to the embassy in Berlin, he enjoyed diplomatic immunity under article 31 of the Vienna Convention on Diplomatic Relations.

The two NGOs approached the situation with joint and individual legal interventions: First, ECCHR and TRIAL International filed a dossier with foreign ministries in Germany and Switzerland about Dias’ alleged personal criminal responsibility for war crimes committed under his command by the 57th division in 2008 and 2009. We requested that he be designated persona non grata under article 9 of the Vienna Convention on Diplomatic Relations, thereby stripping him of his diplomatic status. Additionally, both groups got in touch with the respective war crimes units in Germany and Switzerland, leading to a Swiss decision to announce investigations should he ever re-enter Switzerland without immunity. The Sri Lankan government withdrew Dias as a diplomat to Germany and Switzerland soon after the dossier against him was made public on German TV in May 2011. The German Federal Prosecutor sought to verify whether Dias was still present on German territory, but could not track him down.

Shortly after, in September 2012, ECCHR filed additional cases in Germany—first on behalf of German nationals that survived the merciless shelling in Sri Lanka’s no fire zones and then in 2013 and 2014 for Tamil survivors who came to Germany to seek refuge from wartime atrocities, torture, constant surveillance, and lasting repression. In response, the German Federal Prosecutor opened a structural investigation, which focuses on securing evidence on a specific situation but not on individual perpetrators, into the situation of Sri Lanka and secured eyewitness testimonies.

In parallel with the German structural investigation, the Office of the High Commissioner for Human Rights’ Investigation on Sri Lanka (U.N. OISL) started its work in 2014, interviewing survivors, gathering potential evidence, and publishing its final report. Taking up the U.N. OISL report two years later, ECCHR filed a comprehensive criminal complaint with the German Federal Public Prosecutor, submitting a significant collection of evidence and an analysis of Sri Lanka’s military command structure. The complaint focused on international crimes committed during the last phase of the conflict, including shelling of civilian and humanitarian objects, deprivation of food, extrajudicial killings, disappearances, torture, and sexual violence. Our evidence cited the U.N. OISL report, documentation from international and domestic NGOs, Sri Lankan Army reports, photographs, expert reports from individuals who have investigated international crimes in Sri Lanka for years, and more.

In the following years, more crimes-based witnesses present in Germany offered their testimonies, corroborating the same incidents, locations, and patterns of violence as well as naming direct perpetrators and individuals in the chain of command. Despite the extensive evidence submitted, the German Federal Prosecutor and the war crimes unit claim to have no capacity to investigate those cases to date.

At the same time, the German prosecutor did prosecute one Tamil asylum seeker present in Germany on international crime charges under universal jurisdiction, based on his statement during asylum proceedings. The case ended with an acquittal. Other cases against Tamils in Germany are still being prosecuted under terrorism laws and mostly concern membership in a terrorist organization, the so-designated former Liberation Tigers of Tamil Eelam (LTTE). The same happened in Switzerland.

Conclusions from the German Use of Universal Jurisdiction

After 10 years of universal jurisdiction complaints and investigations in Germany ending in only one trial, a dissatisfying picture emerges. Despite the severity of the crimes in Sri Lanka, which included German victims; hundreds of witnesses present in Germany; and significant evidence presented by the U.N., NGOs, and victims, the German structural investigation led to not a single personalized investigation against a Sri Lankan army official to date. Instead, German prosecutors and police used their few resources available to prosecute a Tamil asylum seeker in a case that ended in an acquittal and press other cases under terrorism laws.

Moreover, in the Dias case, Germany had accredited an alleged war criminal to the Sri Lankan embassy in Berlin. These indications of Germany’s priorities are highly troubling and have not contributed in any meaningful way to the overall aim of supporting international criminal justice in Sri Lanka, an aim that German foreign policy officials constantly affirmed, e.g. by voting in favor of UNHRC resolution 30/1 in 2015 – particularly after the OISL report recommended member States investigate and prosecute (all) those allegedly responsible for international crimes on the basis of the principle of universal jurisdiction.

These one-sided prosecutions have dangerous implications. The fact that former LTTE members are being brought to trial while suspect Sri Lankan army officials largely avoid accountability contributes to further division in Sri Lankan society at home and abroad and makes any form of reconciliation even more elusive.

With its broad legislation to bring universal jurisdiction cases and with high numbers of witnesses in the country, German courts were seen as the best opportunity for justice for the victims of Sri Lanka’s decades-long civil conflict. The United States, which has both criminal and civil universal jurisdiction, failed to prosecute one of the alleged high-level perpetrators, now-President Gotabaya Rajapaksa, despite the fact that he was a U.S. citizen at the time of his alleged crimes. Civil actions in the United States brought against Rajapaksa by the daughter of slain journalist Lasantha Wickrematunge and by Tamil victims of torture also failed after Rajapaksa was elected president and thus became entitled to head-of-state immunity.

Other cases filed against diplomats, e.g. in the United Kingdom by ECCHR, TRIAL, and the Society for Threatened People against former Sri Lankan Army Major General Prasanna De Silva, or in Brazil and Colombia by the International Truth and Justice Project (ITJP) against Sri Lanka’s ambassador in Latin America, General Jagath Jayasuriya, led to withdrawals of the diplomats and alleged perpetrators, but did not result in any significant criminal investigations in those countries.

At the European Union level, member States so far have foregone the opportunity to use the EU genocide network or the Europol database of international crimes to coordinate a common European approach to exchange evidence and build cases for prosecutions. Similarly, no Joint Investigation Team, which comprises war crimes units from different countries, has been formed to investigate international crimes committed in Sri Lanka.

The Importance of U.N. investigations

The result is continued impunity, with perpetrators returning to powerful positions in Sri Lanka and being reinstated to diplomatic posts internationally. Universal jurisdiction still could be an option and could counteract these developments if States would be more willing to collaborate and to devote resources to investigations.

Until this happens, a U.N. investigative mechanism remains the most important next step to protect evidence and ensure that mass atrocities committed in Sri Lanka, as well as continuing systematic crimes, do not go unaccounted for. Such a mechanism would fill important gaps in international investigations and could facilitate, assist, and support universal jurisdiction prosecutions, as the International, Impartial and Independent Mechanism (IIIM) does for cases concerning Syria.

Relying on foreign jurisdictions to bear the burden of accountability for Sri Lanka’s significant crimes clearly has not worked. If the only way to pursue justice for Sri Lanka’s victims for the time being is universal jurisdiction, States will require additional support at the U.N. level. This support must include the establishment of a strong international mechanism to preserve and protect evidence for future domestic investigations under universal jurisdiction.