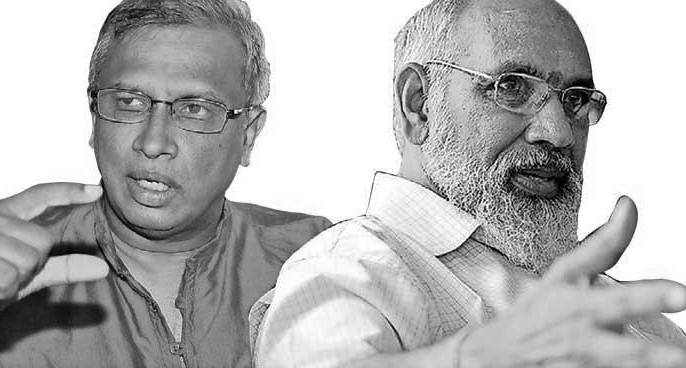 Tamil nationalistic politics which have been overshadowed by the COVID-19 pandemic and related politics seems #to be gaining momentum with the next session of the United Nations Huma Rights Council (UNHRC) early next year.

Tamil political parties are now contemplating to develop a new joint strategy to hold the government accountable, at the UNHRC session in March, to the human rights violations and war crimes allegedly committed by the armed forces during the war against the Liberation Tigers of Tamil Eelam (LTTE). All major Tamil parties representing the Northern Province have already expressed their willingness to fight the Sri Lankan government in unison in this regard, but rivalry among them and their reluctance to be outshined by other parties seems to be a major hurdle.
Until recently, since the decimation of the LTTE leadership by the armed forces, it was only the Tamil National Alliance (TNA) that represented the northern Tamil nationalistic politics in the South and at international fora. However, former Supreme Court Judge and former Chief Minister of the Northern Provincial Council, C.V. Wigneswaran has emerged as being able to provide an alternative leadership in the North while various other Tamil political parties in the region are also now challenging the TNA.

Against this backdrop TNA spokesman and parliamentarian M.A. Sumanthiran had written a few days ago to the Thamil Makkal Theshiya Kootani (TMTK) led by Wigneswaran and to Gajendrakumar Ponnambalam’s Thamil Thesiya Makkal Munnani ((TTMM), the two other Tamil nationalistic parties elected to Parliament at the August general election suggesting a united action at the world’s human rights body at its forthcoming session.
The essence of his letter is to persuade or support another resolution at the UNHRC compelling the Sri Lankan government to be accountable for the alleged excesses during the war. However, it was rejected by both recipients of the letter and the extent of rivalry among them was manifested by some of the undiplomatic and blunt words used by the former SC judge in his reply. “We reject it in toto”, he had said, while explaining the reason for his stance. He wrote back to Sumanthiran saying, “Your Resolution only calls the International Community to extend the favours that have already been granted to a genocidal government. Worse, it does so in the name of the Tamil victims”.

Wigneswaran quoted a paragraph from Sumanthiran’s letter to justify why he rejected the suggestion. “They have meanwhile continued to deploy the military in civilian positions, seize lands belonging to the Tamil people, appoint Buddhist religious personnel to oversee land allotment in the East of Sri Lanka in the guise of archaeological management, increase surveillance and intimidation of victim families, human rights’ activists and journalists, and curtail burial rites of the Muslim community. Additionally, China, which has emerged as a very influential member with key positions in the UNHRC, has publicly assured Sri Lanka on October 9, 2020 that it will support and protect Sri Lanka in the international fora including the UNHRC,” Mr. Wigneswaran said.

“However, another resolution at the next UNHRC session too would be an extension of the previous resolutions which had suggested investigations into human rights violations of both the armed forces and the LTTE”

Then he asks “If you say these things are happening why on earth do you want to give them further time?”

Wigneswaran also makes use of a moderate point that Sumanthiran had mentioned in his letter to outdo the TNA before the Tamil people. He does not want to accuse the LTTE of human rights violations and war crimes. “Of course, you have drafted your preamble to refer to human rights’ violations by both sides. I am not sure we should become the objective observers rather than subjective complainers” the TMTK leader states.

However, another resolution at the next UNHRC session too would be an extension of the previous resolutions which had suggested investigations into human rights violations of both the armed forces and the LTTE. These points indicate Tamil leaders’ concern in making political mileage out of human rights issues, rather than making a collective effort to make their professed goal a reality.

Apart from supporting a resolution on Sri Lanka at the March session of the UNHRC, Wigneswaran suggests several other steps that the Tamil parties could take. They are: To ask the UNHRC to request the UN General Assembly and the UN Security Council to refer Sri Lanka to the International Criminal Court (ICC) or to a specially created international criminal tribunal set up by the UN, trying to take Sri Lanka to the International Court of Justice (ICJ), calling on UNHRC to appoint a UN Special Rapporteur to investigate and monitor human rights abuses and land grabs in Sri Lanka and calling on the UNHRC to establish an Independent Investigative Mechanism to facilitate the accountability and war crimes process.

He also recalled that his party along with TELO, EPRLF, TULF, PLOTE and, Eelam Tamil Sua-Adchi Kazhagam had jointly requested the UNHRC Commissioner in March last year to refer Sri Lanka to the ICC. Yet, Wigneswaran does not seem to be confident on the success of his new suggestions. He tells Sumanthiran, “Beyond whether these are possible or not, it is our duty as representatives of the Tamil people to strive for these.”
Sumanthiran’s letter and Wigneswaran’s reply to it, are in a way a clear indication of desperation over the futility of their efforts in making the Sri Lankan government accountable to the alleged violations of international human rights and humanitarian laws, for the past eleven years. Since the end of the war up to the end of the Mahinda Rajapaksa regime in 2015 during which the world human rights body and the Sri Lankan government were at loggerheads, the UNHRC had adopted three resolutions on Sri Lanka. One of those resolutions adopted at the UNHRC sessions in March 2014 even recommended an investigation by the OHCHR, whose report blamed both the armed forces and the LTTE, while rejecting the suggestion by Tamil groups of genocide in Sri Lanka.

The previous government which took a reconciliatory approach towards the UNHRC co-sponsored three resolutions adopted by the international human rights body but backtracked later on the issue of foreign judges participating in investigations into human rights violations nor did it initiate a local accountability mechanism. The government led by President Gotabaya Rajapaksa went another step forward and withdrew Sri Lanka’s co-sponsorship of the resolutions adopted during Yahapalana government. Yet, no harsh response came from the UNHRC or the international community as the Tamil leaders expected. Thus we have to understand the desperation of Tamil leaders.

The campaigners against the Sri Lankan government are now left only with some of the development in the US to bank on. President-elect Joe Biden is expected to restore US ties with the UNHRC while Vice President-elect Kamala Harris has been a human rights activist with Indian Tamil roots and her Domestic Policy Advisor Rohini Kosoglu is a Tamil hailing from Sri Lanka.