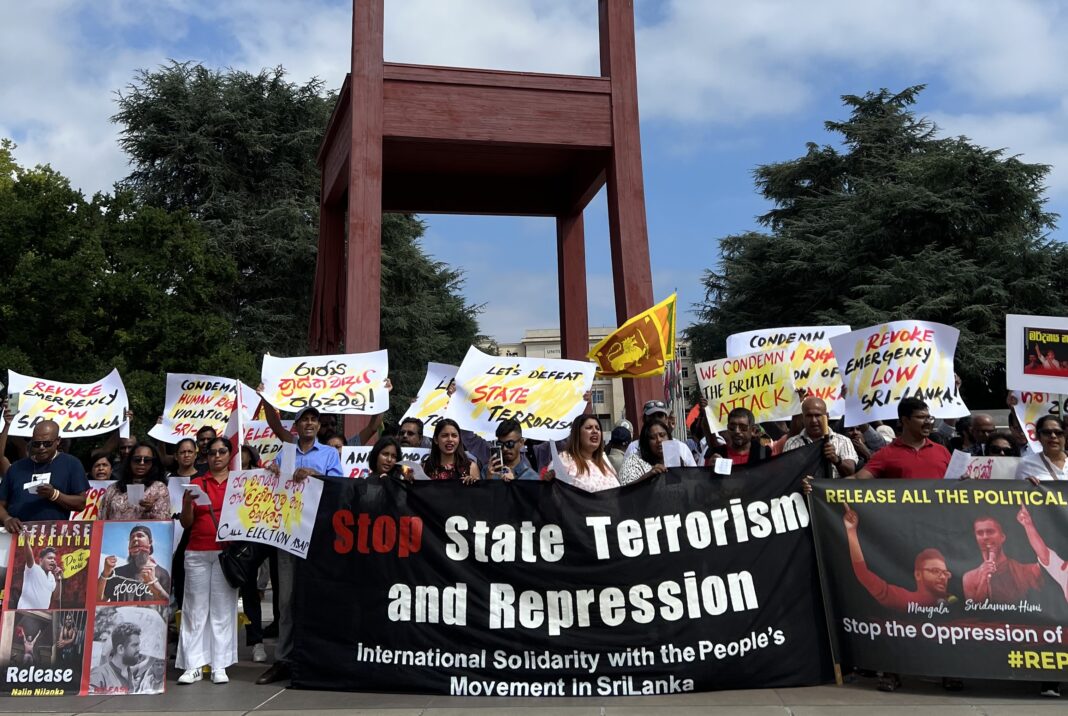 At the UNHRC 51st Sessions due to commence on September 12, 2022, the members are expected to debate the final draft Resolution on accountability, justice and reconciliation in Sri Lanka to be presented by the UNHRC High Commissioner including her oral statement on the first day on 12th September 2022, this being the first item in the agenda.

The question of upholding and implementing recommendations dealing with accountability and justice commenced in Sri Lanka as far as back in 1956 after the communal riots and continued to labor until now with no substantial progress in implementations and/or enforcements by the successive Sri Lankan Governments except a few piecemeal steps and insufficient and ineffective legislations like Enforced Disappearances Act  of 2016 and Office of Missing Persons Act. of 2018

Viewing the lack of progress and deteriorating human rights violations in Sri Lanka, UN and UNHRC finally stepped in which resulted in the accountability, justice and reconciliation Resolutions in 2012 followed by similar Resolutions in 2014 and with a comprehensive Resolution in October 2015 followed by Resolutions Numbers 40 & 46 of 2021 requesting Sri Lanka to implement several Recommendations and the final Resolution against Sri Lanka is expected to be passed in the forthcoming sessions in September 2022.

Sri Lanka’s President Ranil Wickremasinghe who has neither the mandate of the people nor the backing of his United National Party [UNP] which was wiped out in the last general elections found an opportunity to become President, thanks to the blessings and backings of Rajapakshe family particularly Gotabaya Rajapakasha who fled the country unable to face the outburst and island wide fury and dissatisfaction of ordinary masses who have been forced to a hand and mouth living with an uncertain future.

With this dire economic and political situation, the Sri Lankan Government has to face the 51st UNHRC Sessions with an empty performance and records of accomplishments regarding accountability and justice which have been kept in limbo and abeyance coupled with denials since the Resolution in 2015 but also generally from the period 1958 when racial killings of Tamils commenced with the ruling Governments’ encouragement and assisted by the majority Sinhalese Security Forces.

Time has come for the UN and UNHRC to take decisive steps to ensure accountability and justice for the victims and not to fall for the last minute tantrums of Sri Lankan Government with  last minute state measures like releasing some political prisoners and offering hollow promises of actions to placate the Tamil people, Tamil political leaders and Tamil groups who have been agitating for the last sixty years for equality, dignity, justice and accountability.

The recent delistings of some diaspora Tamil Organizations like World  Tamil Movement and Canadian Tamil Congress are pure and simple icing gestures made on the eve of the 51st UNHRC Sessions. In fact accountability and justice are not the properties owned by any organizations or groups. The Tamil groups only espouse the causes of Tamils while accountability and justice for the Tamils are not at the disposal of any group or organization to be dispensed by them. They are only functioning to propagate the causes of Tamils worldwide. The only benefit arising from the delistings is that more freedom of expression and freedom to engage in activities exposing and calling for accountability and justice are opened up to strengthen the causes of Tamils globally and particularly at the UNHRC and UN. It is to be noted that several other Tamil organizations still remain banned but they are allowed to pursue their activities without any interference from the state authorities where they are located. This handpicked delistings of some organizations have been described as “Cynical and farce” by various human rights activists and organizations like Global Tamil Forum, British Tamil Association, Tamil National Alliance  and National Council of Canadian Tamils [NCCT].

It is crystal clear as perceived by many that these moves have been hastily initiated just before the crucial forthcoming September UNHRC Sessions where Sri Lanka is poised to face mounting criticisms for its failures in complying with the several Recommendations of UNHRC Resolutions which deal with accountability, justice and reconciliation.

The draconian Prevention of Terrorism Act of 1979 has now become a handy weapon to mutilate the democratic rights of freedom of expression, speech and assembly. The present President Ranil Wickremasinghe considered as a liberal and a believer of democratic ideals has now donned the garb of a dictatorial president by unleashing the draconian PTA provisions to track down, arrest and detain peaceful protesters from all walks of life who had no political affiliations. It has to be stated that Sri Lanka gave  “assurances to the International Community about a de facto moratorium on the use of PTA and consistently is backtracking on the UNHRC obligations and still continues to surprise the International Community by failing to adhere to its commitments.” It is crystal clear and well known that this is always an expected move by Sri Lanka viewing the past several promises and undertakings given by it to tide over critical situations at international forums particularly with UN and UNHRC Officials. Professor G.L Pieris when serving as Foreign Minister who defended the PTA is now making a hue and cry against the PTA by denouncing the recent arrests of human rights activists under the PTA. Better late than never.

In brief, accountability and justice have become scarce commodities in Sri Lanka despised and debunked with the blessings of state officials who hold the blame and responsibilities for them. It is to be stated that former President Gotabaya Rajapakshe an alleged war criminal is reported to be eying to become the Prime Minister of Sri Lanka to free himself from UN, UNHRC and International Sanctions until such time he holds the office.

With PTA remaining as a handy tool to scuttle any opposition and protests and nip them in the bud by striking at the democratic rights of people, accountability and justice will continue to remain as a pipe dream in Sri Lanka particularly for the thousands of Tamil war victims including the mothers and relatives of the thousands of the disappeared persons and abandoning the victims who are on sit in protests in sun, dust, rain, on the streets for more than 2000 days.

President Ranil Wickremasingha’s latest moves like involving the military in civilian activities and declaring emergency when there is no necessity for it have exposed his dictatorial inclinations and ambitions and arresting of peaceful protesters have to be curtailed before it is too late for the sake of democracy.

It is now up to the UN and UNHRC to right the wrongs and use their powers and authority to bring Sri Lanka to books and make them uphold accountability and justice, failing which to consider imposing appropriate sanctions while not believing the false promises and undertakings including dilly- dallying tactics of Sri Lanka.