UNHRC resolution: Time for a rebellion for democracy

The US resolution on accountability and reconciliation, which was moved at the UNHRC, remains a threat directed at the Mahinda Rajapaksa regime.

But many Tamils feel that it falls far short of their expectations. It is naïve of them to believe that global powers will go against a regime that has won the heart of the IMF.
Despite the theatrics by Minister Wimal Weerawansa, the President follows the path laid down by the global capitalist masters; he has also satisfied the conditions placed by the IMF with regard to the path of development. Already steps have been taken to place the burden of repayments on the shoulders of the proletariat and the plebian masses of all communities.

The resolution has only called on the government to implement the recommendations of its very own Lessons Learnt and Reconciliation Commission (LLRC). The opposition has also been saying the same thing since the LLRC report was released nearly a year ago. But the Mahinda Rajapaksa regime had avoided implementing the recommendations while promising an action plan to those who were eager to raise the issue. At the same time, vociferous sections of the government claimed that only traitors to the country are insisting that the LLRC recommendations be implemented. However with the second successive US Resolution adopted with the support of a majority of UNHRC members, the pressure to implement LLRC recommendations has increased. Failure to act urgently could lead to strictures and even sanctions, as India and other global powers are being heavily criticised for soft-peddling the issue. However such action would ultimately affect the people of all communities, but not the ruling party politicians and the new rich bourgeoisie.

The latter are living in luxury wasting resources without any care for the suffering people. Despite the anti-imperialist rhetoric of our old comrade Wimal and various Ministers,  the fact remains that the US and EU are not only Lanka’s largest importers, but also have a majority shareholding in most of the investments that had come into the country. On the other hand the Mahinda Rajapaksa regime is heavily indebted to the Global marketplace. Hence the “patriotic” government is in the clutches of the imperialist masters.

Despite protests the opposition is willing to participate in implementing the LLRC recommendations, even now, if the government is prepared to go into action. In that case some of the ministers who are totally opposed to the LLRC may leave the government. The President has to decide whether to continue with lies and distortions or to take resolute action to arrive at reconciliation with the Tamil-speaking people.

The UN Human Rights Council Resolution calling for progress on Lanka’s long outstanding reconciliation and accountability issues in relation to the Tamil people is merely asking the Government to deliver on promises made to the international community since 2009. If the President could break out of the chauvinist stand and is prepared to work with the opposition including the TNA to implement reconciliation measures, then he can avoid further international censure. The President has to break out from the path of broken promises. In the past the Government had consistently broken its promises to the world on political devolution, the full implementation of the 17th Amendment and an inquiry into alleged human rights violations during the final stages of the war. At Geneva the Mahinda Rajapaksa regime behaved ludicrously.  While the world was crying out for demilitarisation, autonomy to the Tamil homeland, an independent inquiry, greater freedom of movement and media freedom in the North, the Government explained to the council with precise technical detail, how many roads and bridges had been built in the North. 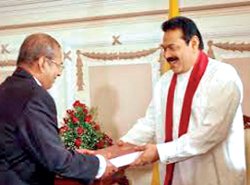 The stupid government delegation did not realise that the UNHRC is not the forum that calls on states to explain their obligations on road and bridge building!
All patriotic people who sincerely desire to avoid this kind of resolutions on Lanka should press the Mahinda Rajapaksa regime to act seriously because what the resolution demands today is that the Government keeps the promises it had made to the international community.It is the recommendations of the Government’s own Lessons Learnt and Reconciliation Commission report that the resolution is urging the Mahinda Rajapaksa regime to implement.

However an opposition that accepts the LLRC recommendations must come out to mobilise all democratic forces to press for its implementation. We need a rebellion for democracy and freedom because the dictatorship is in crisis. We must combine the demands for the eradication of poverty, corruption and misery with that for the implementation of the LLRC recommendations.