UNHRC resolution on Sri Lanka: Positions of the Political parties and Civil organisations 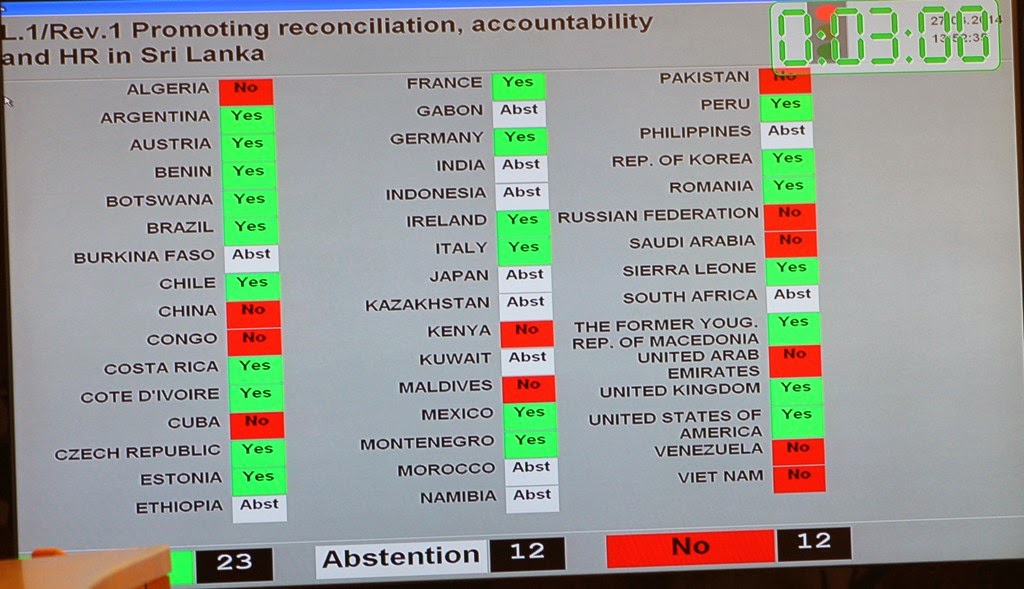 Rajapaksa family to blame for Sri Lanka’s current plight – UNP  – UNP
Sri Lanka Rejects UN Rights Probe,a conspiracy for a regime change
TNA welcomes resolution
Govt. responsible for Geneva debacle; JVP
Tamil Civil Society Forum concerned at limitations of resolution
Rajapaksa family to blame for Sri Lanka’s current plight – UNP  – UNP
It has now become abundantly clear that the ruling regime is playing a dangerous game with regard to the Human Rights crisis and risking the wellbeing of the entire nation for mere political expediency. Confirming our worst fears, the President has himself publicly admitted recently that he does not care at all about the challenges in the human rights arena which culminated on the 27th with a vote concerning Sri Lanka in Geneva. The President’s sole interest by his own admission is on a victory delivered to him at the Provincial Council election due two days later.

It is now crystal clear that the regime set the date for the Provincial Council election for the 29th of March in the full knowledge that it would face a resounding humiliation in the international arena in the week preceding the election.

It is nothing short of despicable that the Rajapaksa administration has chosen to turn a major crisis facing Sri Lanka internationally into a political rallying point in order to consolidate power.

The recent arrest, especially of two human rights defenders, who were later released without charge, raises the natural question as to whether the regime intentionally sabotaged its own chances in Geneva to galvanize its support base ahead of the election. There is no other rational reason for a regime that is already under international scrutiny to act in such a self-defeating fashion.

It is deeply ironic, to say nothing of the hypocrisy that senior members of the ruling Rajapaksa regime, who rant about the agendas and conspiracies of the West in general and America in particular, continue to cling to their American citizenship. If America is Sri Lanka’s most dangerous enemy internationally, who has sworn greater allegiance to the enemy state but the chest-thumping, patriotic siblings of the President who are naturalized citizens in the US? We call upon the great patriots, to renounce their US citizenship, even as they call upon the Sri Lankan people to express their displeasure against America at Saturday’s election.

The UNP has repeatedly called on the regime to address the human rights challenges facing this country with the credibility and seriousness they deserve. The UNP has repeatedly extended its support to address these challenges and urged that by restoring public faith in the rule of law and independence of the judiciary, the Government can secure a degree of credibility for domestic inquiries into allegations against the country and its armed forces. We have urged the regime to reverse the draconian 18th Amendment to the constitution and restore the 17th Amendment that sets up independent institutions. We have urged the Government to uphold media freedom, protect the people’s right to information, stop the intimidation and harassment of dissidents and political opponents and prevent arbitrary arrest and killings during democratic civilian protest.

The UNP, as a responsible opposition has also consistently warned that the eventual victims of these international actions will be the ordinary citizens of this country.

The wealth accumulated by the Rajapaksa family and their cronies have already been well safely secured. The ordinary people do not have similar safeguards. International action that is generalized and targeting Sri Lanka as a whole will be a burden the Sri Lankan people will be unable to bear.

The regime has spurned all of our offers. In doing so it has opened the doors for international intervention. Through the illegal impeachment of the Chief Justice and making a mockery of the judiciary the regime has amply demonstrated to the world that Sri Lanka is incapable of addressing human rights issues domestically. The regime has repeatedly denied and rejected all the allegations being brought against it. They believe that hostile rejection and dismissal will work to persuade the international community. The Rajapaksa administration is about to learn a bitter lesson in international politics, and it will be a hell of its own making.

Whether it was regarding the killing of civilians in the North during the final phase of the war or the massacre of civilians asking for safe drinking water in the South, there is little hope of justice for the victims from this regime or the puppet Judiciary it controls. These twin factors remain the fundamental reason for Sri Lanka’s plight in the international arena today. Let us be absolutely clear; irrespective of the chest thumping rhetoric about international conspiracies, anti- Sri Lanka UN officials, omnipresent and omnipotent Tamil Diaspora and all kinds of purported enemies, the sole blame for Sri Lanka’s current plight lies with the ruling Rajapaksa family. It is they that undermined Sri Lanka’s judiciary, it is they who permitted civilian protestors to be shot in cold blood and they who have consistently, determinedly refused to read the writing on the wall for five years.
Issued by the UNP
– 2014.03.28

Sri Lanka vehemently rejected the UN sponsored resolution adopted by the UN Human Rights Council in Geneva on Thursday (27) as an conspiracy by “parties seeking a regime change”.

External Affairs Minister Professor G.L. Peiris said that the outcome of the vote on the U.S sponsored resolution at the UN Human Rights Commission reflects that more countries are against the U.S at the Human Rights Council in Genevaddressing a press conference at Peacock Hotel in Hambantota. He said the countries voted in fabour of the ‘unethical’ resolution because they could not reject US pressure for economic reasons.

The External Affairs Minister said the international community knowing that they cannot bring about a regime change in the country by means of democratic means, was attempting to achieve their objectives through external means with the support of opposition and other inimical forces in Sri Lanka.

Meanwhile Sri Lankan President Mahinda Rajapaksa rejected the resolution ordering a war crimes probe, telling AFP news agency that he would instead press ahead with his own reconciliation plan.

“We reject this,” Rajapaksa said. “This resolution only hurts our reconciliation efforts. It does not help. But I am not discouraged. We will continue with the reconciliation process I have started.”
CT

The Tamil National Alliance today welcome the Human Rights Council’s resolution which requests the High Commissioner for Human Rights to undertake a comprehensive investigation in respect of past and post-war violations of human rights and the perpetration of serious crimes.

“ The resolution is a victory for all Sri Lanka’s Peoples in their struggle for truth, justice and reconciliation. The resolution sends a strong message to the Sri Lankan government that the undemocratic, militarized and discriminatory trajectory on which it has set the country is unacceptable and unsustainable,” the TNA said in a statement.

It added that the TNA looks forward to remaining engaged with the Government of Sri Lanka, the international community and the United Nations in giving effect to today’s resolution and using it to benefit all victims of serious violations in Sri Lanka
ST
Govt. responsible for Geneva debacle; JVP

The Janatha Vimukthi Peramuna (JVP) said today the Government was solely responsible for the adoption of the UNHRC resolution because the Government was unable to win the confidence of the 12 countries that abstained due to continuous human right violations and the inability to uphold democracy in the country after the war.

“The Government did nothing to secure the support of the member countries. Even countries like Indonesia and Kuwait which voted in favour of Sri Lanka last time abstained from voting this time. It was not so much about alleged war crimes but also because of media suppression, human right violations and been unable to establish democracy after the war. If the resolution was only about the alleged war crimes, the Government would have won,”JVP General Secretary Tilvin Silva said.

He accused the Government was attempting to gain political advantage out of the Geneva issue rather than trying to defeat it and said it did not have a proper vision or an action plan to defeat the resolution.(Ajith Siriwardana)
DM

In a statement signed by the Bishop of Mannar Rev Rayappu Joseph and Kumaravadivel Guruparan, a lecturer at the University of Jaffna, said, “TCSF expresses appreciation for those countries that sponsored and voted for the resolution. We are extremely disappointed that India chose to abstain during the vote on the full text of the resolution and to vote for the motion that sought to delete the paragraph (Operative Paragraph 10) in the resolution authorising the OHCHR to undertake investigations,

“We deeply regret that this resolution does not provide for the establishment of a robust mechanism of international investigations in the form of an International Commission of Inquiry. We are also concerned that the Office of the Human Rights Commissioner’s mandate for investigations has been limited to the Lessons Learnt and Reconciliation Commission’s time framework. The resolution does not explicitly provide her office the authority to investigate ongoing violations,

“We are concerned that despite the resolution and the debate leading up to it, the plight of the Tamils continue and continue to escalate. We wish to stress upon the International Community, the need to take bold, firm and decisive steps that will be necessary to address the ongoing suffering of the Tamils.”
ES