UNHRC adopts a resolution on Myanmar: Calls for fair and independent criminal proceedings at all levels 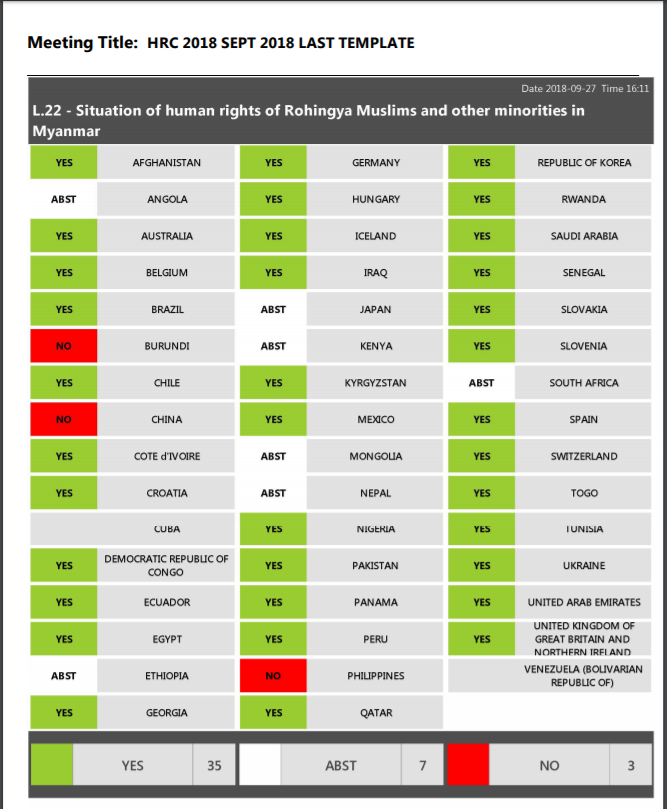 Only 3 member states of the 49 member council including China,  voted against the resolution. Resolution was adopted with 35 votes in favour  7 absent and 3 against.

23. Also decides that the mechanism shall:

(a) Be able to make use of the information collected by the fact-finding mission and continue to collect evidence;

(b) Have the capacity to document and verify relevant information and evidence, including through field engagement and by cooperating with other entities, as appropriate;

(c) Report on its main activities on an annual basis to the Human Rights Council as of its forty-second session and to the General Assembly as of its seventy-fourth session;

24. Takes note of the International Criminal Court Pre-Trial Chamber’s ruling that it may exercise jurisdiction over the deportation of the Rohingya people from Myanmar to Bangladesh, and requests the mechanism to cooperate closely with any of its future investigations pertaining to human rights violations in Myanmar;

25. Requests the Secretary-General to appoint of the staff of the mechanism as expeditiously as possible, taking into account the experience of other relevant mechanisms, and to recruit or allocate impartial and experienced staff with relevant skills and expertise, drawing upon terms of reference prepared by the United Nations High Commissioner for Human Rights;

26. Calls upon all States, including the Government of Myanmar and its independent commission of enquiry, and encourages civil society, business enterprises and other relevant stakeholders to cooperate fully with the mechanism to effectively fulfil its mandate and, in particular, to provide it with any information and documentation they may possess or come to possess, as well as any other forms of assistance pertaining to their respective mandate;

27. Requests the United Nations system as a whole to cooperate fully with the mechanism and to respond promptly to any request made by the mechanism, including access to all information and documentation;

29. Encourages the General Assembly to consider taking further action to address the serious human rights violations committed in Myanmar, particularly in Rakhine, Shan and Kachin States, as documented in the final report of the fact-finding mission,1 and to seriously consider the recommendations contained therein and to pay due regard to the establishment of the mechanism;

30. Decides to extend the mandate of the independent international fact-finding mission, established by the Human Rights Council in its resolution 34/22, until the new mechanism is operational to ensure that the large and continually increasing amount of evidence of human rights violations and abuses it has collected is fully documented, verified, consolidated and preserved in order for the material to be effectively shared, accessed and used by the mechanism, and requests the fact-finding mission to submit a final report on its main activities to the Council at its forty-second session;

31. Requests the United Nations High Commissioner for Human Rights to present a written report, to be followed by an interactive dialogue, to the Human Rights Council at its forty-third session, on the root causes of the human rights violations and abuses the Rohingya Muslim minority and other minorities in Myanmar are facing, including discrimination, racial intolerance and xenophobia and Islamophobic practices, in violations of international human rights law and contrary to international declarations, including but not limited to the Durban Declaration and Programme of Action, and to recommend concrete measures to be taken by the Government of Myanmar and the international community to address the current situation;

32. Encourages the United Nations system to give due consideration to the recommendation by the fact-finding mission on conducting a comprehensive, independent inquiry into the involvement of the United Nations in Myanmar since 2011 with a view to establishing whether everything possible to prevent or mitigate the unfolding crises was done, identifying lessons learned and good practices, making recommendations as appropriate, including on accountability, and enabling more effective work in future;